The surrealistic horrors imagined by New England author H. P. Lovecraft have always bled into the open plans of fantasy, which is why the eccentric writer has long been such a heavy influence on the video game world. With survival-horror picking up massively in popularity, especially since The Last of Us, his indelible prints have never been thicker or more obvious.

The Sinking City isn’t ashamed of owing its entire atmosphere to Lovecraft, nor is it afraid of criticising the author’s well-known xenophobia and challenging it in clever, explicit ways. Facts Concerning The Late Arthur Hermyn and His Family and The Shadow Over Innsmouth – both Lovecraft works – are mined for plot points throughout the narrative-driven detective game, in which players control a World War I vet named Charles Reed who has since moved on to become a private investigator. And the journey is richer for it, throwing Reed into the fictional city of Oakmont, Massachusetts and layering on these cerebral, beautifully connected mysterious to solve which each provide deeper insights into both nightmares that have been haunting Reed, and this incredibly spooky place.

The game isn’t short of immersive qualities, nor does it shy away from thickly layered, vivid storytelling often so well written (considering how cliché the protagonist is) and presented that the overlong dialogue gets away with testing the most impatient of gamers (me). Plenty of side quests are discoverable throughout the game, and each have a strong sense of purpose in fully fleshing Oakmont and bringing Reed deeper into the intricate web of cults, corruption, hate crimes, fish-men, and the general nastiness that make human characters almost inseparable from the many beasts lurking around. 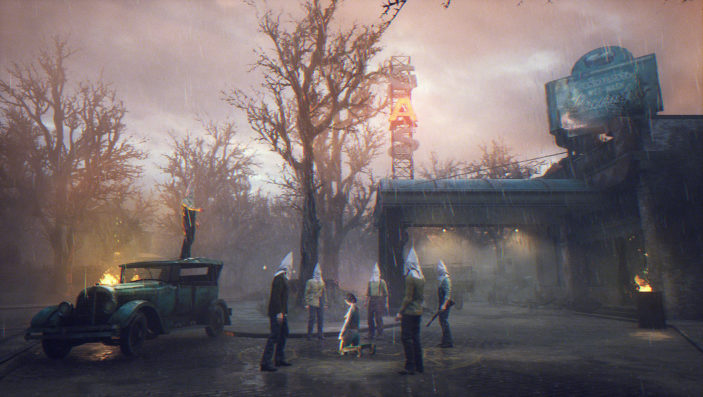 There are strong strands of David Lynch lying around (although that’s already implied with Lovecraft), which definitely keep the game feeling fresh and interesting as Reed progresses through his investigation. Elevating the narrative with creative, entertaining and sometimes even shocking developments is definitely a strong point to atone for The Sinking City’s middling controls and frustrating traversal.

As mentioned above, impatient gamers should find a lot of calm their nerves and keep them hooked, but the game does have some big asks when it comes to repetitive exploration. Getting from one place to another is tedious and the lack of fast-travel (though there is some) doesn’t help.

There’s also an overzealous commitment to scarcity of resources in the game. Ammunition is hard to come across, and hence the scattered – and rather unexciting – action sequences, in which you do actually have to fight monsters, can be challenging. It’s good because it makes the game feel much more tense and introduces plenty of strategy, but also quite annoying given the game’s laborious pacing.

Gameplay is mostly logging clues in notebooks, speaking with witnesses, piecing together fragmented memories, and vigilantly scanning these heavily detailed settings for hidden-in-plain-sight secrets. For those attracted to sleuth style gameplay, The Sinking City is an absolute joy and that’s before we even get to the gorgeously macabre and imaginative game that developers Frogwares have turned in and retooled for the PS4 and Xbox One. The game gets extra points for not holding your hand the entire way through, trusting the detective work of the actual player and leaving them to their devices as they unwrap these mysteries themselves. It’s much more rewarding that way, and progress feels genuinely earned.

The Sinking City is one hell of a trip. It’s engaging, meticulous and lovingly thrown into the pits of insanity at the best of times, which mostly overrides the persistent problems that hold the gameplay back. The various social statements that not only tackle Lovecraft’s issues but also religion and selfishness, only add to how rich and provocative this world is. But you’ll need to pay close attention to get the most out of it. Maybe this is best approached with a heavy dose of patience.