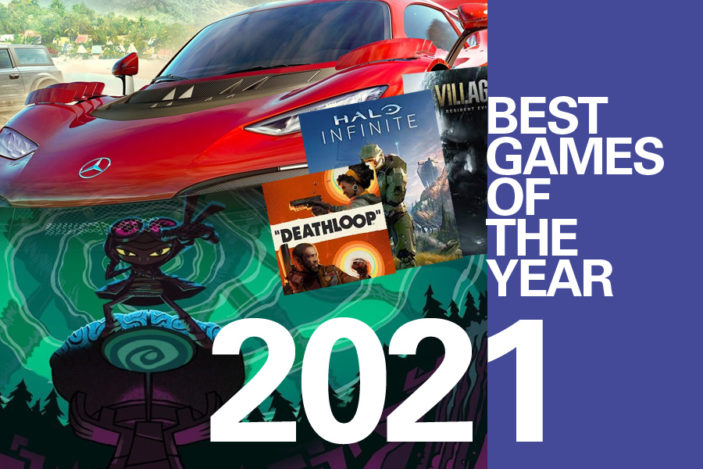 2021 has been a special year for gamers and non-gamers alike. For reasons we won’t dive deeper into, this year has forced us to stay inside. Away from those we love, places we cherish and experiences we usually take for granted. This time around, the games and technology team here at The AU Review have crafted a list of our favourite games in 2021, in no particular order; because any game that helped you get through this year, is a game of the year in our books. So join us below, as we round out our favourite gaming gems in 2021.

Story of Seasons: Friends of Mineral Town is the blast from the past that I didn’t know I needed. So much of the gameplay is familiar but better, as they’ve removed a lot of the old pain points and limitations that I remember from playing the original released in 1999. The game itself has also taken strides to be more inclusive with better character customisation and romance orientation (if at all), although I wish it went a little bit further. The graphics are adorably cute and nothing is more representative of this than the fact that you can now rear the fluffiest of alpacas as well as have pink cows that produce strawberry milk. Remakes can sometimes be disappointing but if I’ve learnt anything from tilling the fields, mining for ore and schmoozing with the magical sprites, it’s that friendship is forever. – Samantha Low

Although it officially released at the end of 2020, its 2.0 update in July 2021 changed everything. With it came the hotly anticipated region of Inazuma (likened to feudal Japan), deeper storylines and a plethora of exciting new characters that are still being revealed at the time of writing. The gameplay itself continues to be enjoyable as all of the aforementioned additions make the actual combat and strategy fresh. Separate to the kawaii character design, dazzling elemental reaction and slightly addictive “Gacha” system, I will always be grateful to Genshin Impact for its co-op mode that helped me travel to see my friends and family all from my living room. – Samantha Low

Look, I haven’t exactly loved the previous versions of this game. This felt like the first truly next-gen experience on the PS5. The Pixar level graphics, zero loading time and thumping pop dance fusion soundtrack was an absolute winner for me. Giving a game a 20 hour play time to complete the story also gave this a perfect time management in a world of 80-90 hour game norms. – Alaisdair Leith

Ratchet and Clank: Rift Apart stands as a testament to the longevity of an inventive franchise and the true potential of the PlayStation 5. This is without a doubt a blockbuster romp through gorgeously detailed worlds, beautifully paced narrative and addictive gameplay. While its shorter length allowed me to blast through its story in good time, its also hard to knock it about for its length, given everything it exudes is of such a high quality. – Matt Arcari

It’s been a while since I completed a Resident Evil title, this one is creepy, set in an abandoned village with a varied level of monsters, vampires and psychopaths. This is addictive horror gaming at its finest. – Alaisdair Leith

The Resident Evil franchise has always hooked me intermittently. While I tend to duck out for a few entries, make no mistake; I was returning for this one. Much like Resident Evil VII: Biohazard, this next step in the franchise only highlights the new approach, crafted within its first-person view and memorable antagonists that retroactively reinvented the series, all while paying homage to many of its staples. A haunted castle, filled with insane villains and a 9-foot tall vampire lady? Sign me up. – Matt Arcari

This wild and whacky action platformer surprised me. While I didn’t get to experience the original game, this sequel is accessible to everyone and will charm you with its heart-warming story of family and acceptance with some beautiful graphics. You won’t be disappointed. – Alaisdair Leith

Marvel’s Guardians of the Galaxy

After the disaster of Marvel’s The Avengers, this was a complete surprise. Not only was it an expansive story that incorporated all of the Guardians main team and some surprise Marvel guest stars, the graphics and art were bright, bold and beautiful. and licensing music from the 1980’s gave it that Guardians flavour required to truly make it an authentic experience. – Alaisdair Leith

Much like Ratchet and Clank: Rift Apart, there’s nothing wrong with a linear, well crafted narrative experience with heart. I’ll admit I was hesitant at first, given the last highly anticipated, yet lacklustre superhero package that was Marvel’s Avengers. But with some inventive combat mechanics, cinematic story and killer licensed soundtrack, it’s really hard to complain about something so solid. Sure, Marvel’s Guardians of the Galaxy plays it safe at times, but given their well-received introduction and role within the Marvel Cinematic Universe, only highlights the iconic ragtag gang. – Matt Arcari

Xbox come through and deliver the best looking game of the current-gen on the Xbox Series X. By chance my partner walked past and said “why are you watching racing” because yes, it does look THAT good. Setting this instalment in Mexico ensures a fun and varied landscape through volcanoes, ancient temple ruins and magnificent beaches. There is a plethora of races and challenges in the expansive open world. This is Playground Games highest achievement to date. – Alaisdair Leith
Okay, I said these weren’t in a particular order, but if I have to award Forza Horizon 5 with something, it’s most definitely the best looking game I’ve played this year. The series has always been know for its arcade approach to street racing, but thus time around it feels like so much more. A gorgeously rendered recreation of Mexico, more cars than ever to choose from and a local soundtrack that sets the tone from the very start. It’s not necessarily that Forza Horizon 5 pushes the series in new directions, but that developer Playground Games have truly nailed their current formula, almost to the point of perfection. – Matt Arcari

Deathloop is without a doubt not only one of the best games of the year, but one of the most inventive. It’s widely original story, organically evolving open-world and charming leads culminate in one of the most engaging gaming experiences of the year. Cole and Juliana bring with them an absurd amount of wit and charm, thanks to some quality voice acting. But its focused narrative stands out as it always makes you feel like you’re progressing, be it in small steps or giant leaps. Whether you’re waking up on the beach of Blackreef for the first or hundredth time, get ready for the ay of your life. – Matt Arcari

The franchise that keeps on giving. 20 years on, Halo is still providing blockbuster campaigns and addictive multiplayer experiences. Halo Infinite sees the Master Chief returning to the fold, capping off a number of long-lasting loose ends, all while building towards catering for a new generation of fans. The introduction of open-world environments and non-linear progression stand as a true testament to the evolving nature of the series, proving that you can indeed teach an old dog new tricks. In terms of multiplayer, fans both new and old can take part in one of the most consistently engaging and additive multiplayer experiences of the year, that I’m sure will stand the test of time. While it’s available on Game Pass, the multiplayer is completely free. If you’re a fan of the franchise, welcome back. But if you’re new, there’s arguably never been a better time to jump in. – Matt Arcari

It’s safe to say that 2021 has provided a healthy amount of variety and quality. Do you agree with these picks on our list? Did we mention one of your favourites? Either way, we feel as though there’s no better time to try these if you haven’t! From us here at The AU Review, we would also like to take this time to wish you all a very Happy Holidays, Merry Christmas and Happy New Year. See you in 2022!