Tech Review: The HyperX Alloy Core RGB is a great gaming keyboard under $100

I really like HyperX’s keyboards. I’m on record as a fan of their gear. The thing is, I’ve really only had experience with their top-of-the-line mechanical boards. The HyperX Alloy Core RGB gaming keyboard is not one of these top-of-the-line boards.

But just because it isn’t a mechanical board doesn’t mean it isn’t worth your time. The Alloy Core RGB represents the mid-tier of the HyperX keyboard range. It has the rainbow coloured LEDs against black plastic look that is so popular among PC accessory enthusiasts.

HyperX have only moved into the world of RGB-infused accessories, having skated by on their on-brand black-and-red look for quite a while. The Alloy Core RGB comes with a few colour presets (which includes the old black-and-red if that was your thing). Presets include breathe patterns and smooth colour waves running left to right. They’re managed from a row of buttons above the Function keys rather than any modifier to the Alt or Fn key as has been the case on other models. Volume controls are placed to the upper right and kept out of the way. 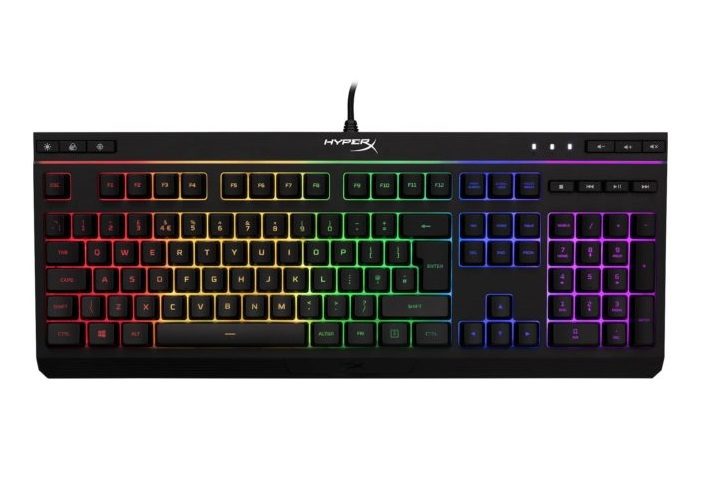 One area I would like to give this board a little extra praise is in the fact that it actually has a wrist rest. Owners of HyperX keyboards are currently gasping out loud — don’t get too excited, it’s not a terribly big one. But it is a step in the right direction considering HyperX’s long history of not including wrist rests at all. I’m happy to see it, HyperX. More please.

Key presses are very quiet but precise. It’s impossible to get the kind of response times a mechanical board can offer without mechanical switches, but the Alloy Core RGB does everything it can to allay any concerns from ultra-discerning PC Master Racers. Its anti-ghosting functionality is actually quite good, cutting the response time about as low as it can go in a non-mechanical board. Game movement still feels good and it didn’t feel like I was losing much in the step down from the HyperX Alloy FPS RGB. The obvious benefit for a user like me, someone who uses their computer for work as often as they do gaming, it makes for a much quieter office compared to my Alloy FPS. This gives the Alloy Core RGB a significant advantage as a go-between board.

I feel like I say this every time I review a HyperX board but it’s always true — this is a solid, reliably built keyboard. For those who want the feel of a mechanical board but don’t have the cash to drop on such an expensive purchase, it presents a rather good option. As boards under a hundred dollars go, this is one to strongly consider.