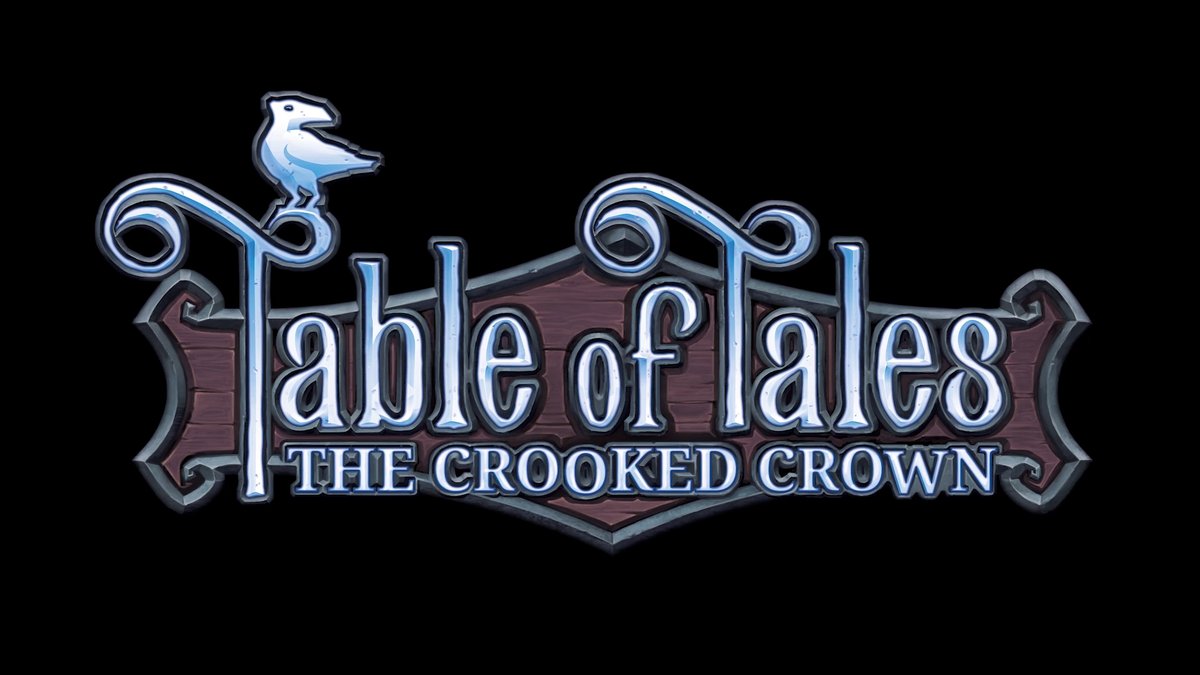 Table of Tales: The Crooked Crown is the future of tabletop storytelling. It’s also one of the few games I’ve played lately that enthralled me so much I lost time. Coming from Melbourne studio Tin Man Games, this is just one in a long line of brilliant Australian games proving the depth and ingenuity of our local games creators.

Before I begin this review, it’s important that I say this – you need to play this game. And now, onto the review.

Table of Tales begins as any typical RPG would – with a band of adventurers in strife. But unlike your normal RPG, this tale takes place in a meta-landscape. You, the player, have uncovered a mysterious, enchanted tabletop in your Aunt’s attic – and along with it, a magical bird named Arbitrix, who serves as your guide. 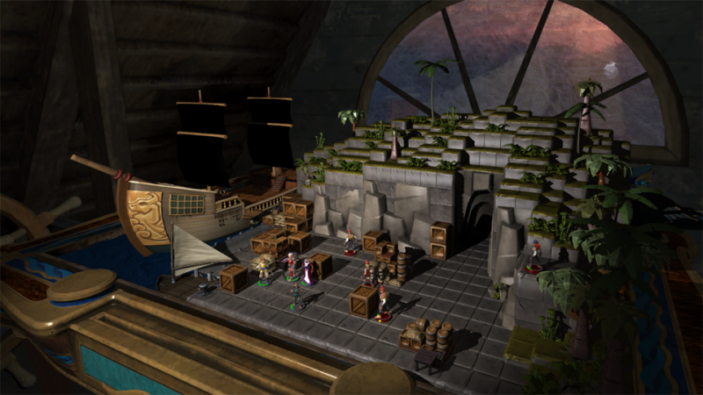 Essentially, you’re playing a game within a game, a Pathfinder-style RPG where you guide your hero tokens through battle with action cards, and watch the dramatic battles come to life via the magical tabletop.

But your band of heroes aren’t quite as they seem, and as you guide them through their quest, you begin to learn more about their fascinating pasts and the misdeeds that led them to your crew. As you travel, you’ll fight, loot and solve your way past a variety of challenges – but your victory will often rely on the roll of a dice.

This VR game can be played using the controller, or via PS Move. If you have access to Moves, I would highly recommend them, because they make the game far more involving.

If you’ve ever played a tabletop board game, you’ll be highly familiar with the mechanics that Table of Tales employs. Essentially, you control the movement of your hero tokens across the board as they lock arms with their enemies. 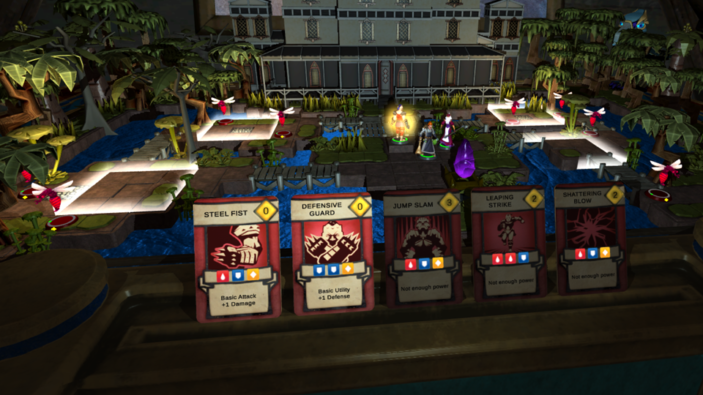 Sometimes, using the Move isn’t as accurate as it should be – and you’ll often send your heroes hurtling into the sea with an unintentional arm jerk. Enemy tokens can also be easily knocked over if you aren’t great with the controls, but tokens are quick to right themselves, making the whole experience occasionally clumsy, but always fun.

Actions are taken using ability cards, which expend action points, and occasionally, heroes will have to pass skill checks to overcome a challenge or barrier. This involves the rolling of virtual dice, which can be picked up and shaken using the Move controllers. The game does everything in its power to replicate the classic board game feeling – and it does it incredibly.

Like any true RPG, what defines Table of Tales is choice. When your merry band of scoundrels set off, they’re faced by a range of story-changing choices, with players firmly in the front seat. Choices made in the prologue will affect your entire team, with one of the first decisions you make involving the death of one of your loyal scoundrels. 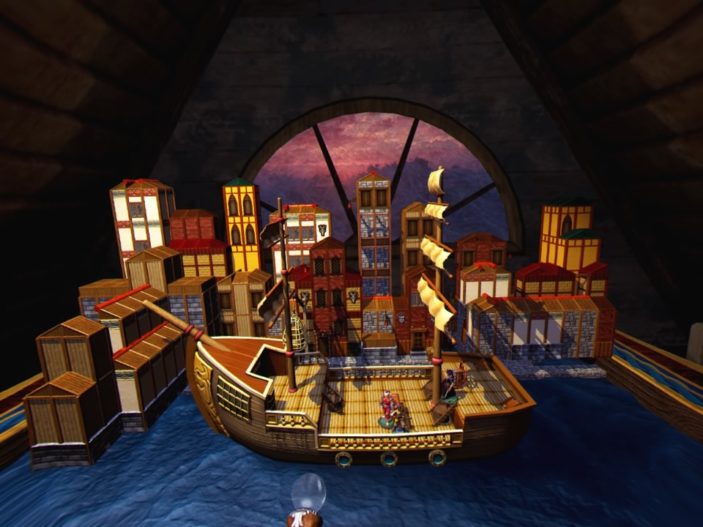 As you traverse dungeons, towns and the high seas, these choices will become essential to your success – will you destroy a mysterious, monster-spawning portal, or will you run away with your life? Will you take the high road or the low road? Each battle and choice has consequences, and it gives players a real stake in every move.

Table of Tales uses a subtle, atmospheric score to bring players into the world of the game, and when I say I lost time playing it – I mean it. Two hours passed before I realised it, simply because the music and story were so involving and fascinating. The way that the game builds itself up is great, and it perfectly suits the tale being told.

Table of Tales’ use of VR is fantastic – it’s stable, gorgeous and refined, so much so that I was able to play in 2 hour lots with no side effects (a vast improvement from my usual 20 minute, vomit-inducing stretches). 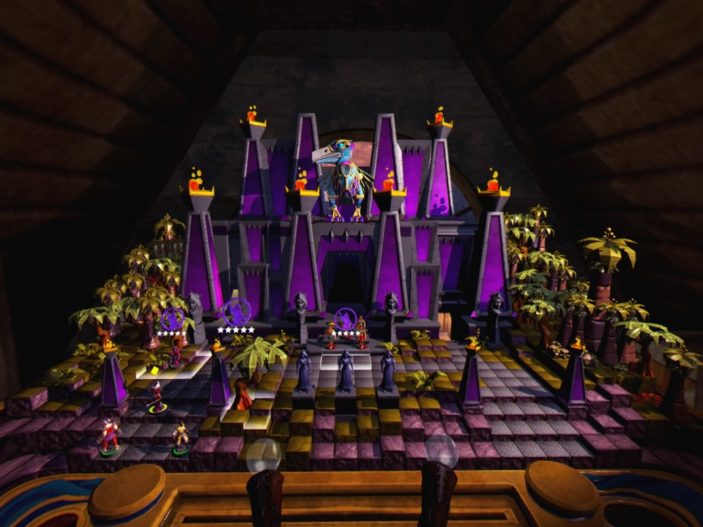 The game has a single focal point – the magical tabletop – and exists inside a relatively low-res attic. The benefit of this is minimal head movement is required, and taking on a stationary position means there’s no dizziness or headaches that come with it. This is a VR game that anyone can play – and everyone should play it.

Table of Tales does offer a local multiplayer experience, allowing you and up to three friends to traverse a dungeon together, with the VR headset-wearer becoming the villain that attempts to thwart the others. Unfortunately, I wasn’t able to test this capability in my run through, but the option is available for those with friends.

Table of Tales is a rare experience. It’s equal parts thrilling, fascinating and fantastic. I don’t think I’ve ever played a game like it, and I would love to see more. As tabletop gaming evolves, I can definitely see a future in the tabletop-as-VR genre.

Reviewed on PlayStation VR with a retail code provided by the publisher.