My first foray into farming simulation games dates back further than Harvest Moon‘s rebrand to Story of Seasons. I’m old enough to remember when it was called Harvest Moon: Back to Nature.

That game is now 22 years old. It’s hard to overstate how uncommon slice-of-life narrative games were back then. Today, there are video games to suit every taste. Runaway successes like Stardew Valley and Animal Crossing are a testament to changing tastes. There is an entire subculture of gamers whose only desire is a chill world they can hang out in.

The PS4 release of Story of Seasons: Friends of Mineral Town is a beautiful homage to the original. It allows me to proudly explain why, over two decades later, I still enjoy pulling virtual weeds, planting potato .pngs and marrying Doctor, who is best boy.

Players can choose from ‘Simple Mode’ and ‘Normal Mode’ difficulties. Simple Mode strips the experience back for more casual play. You’ll start with more initial capital and some turnips ready to harvest. Your shipment is worth more and raising the affection of the townspeople is significantly faster. Simple Mode removes some of the early grind to let players into the story. It keeps things moving when you’d ordinarily be foraging for money and waiting for new crops to grow. 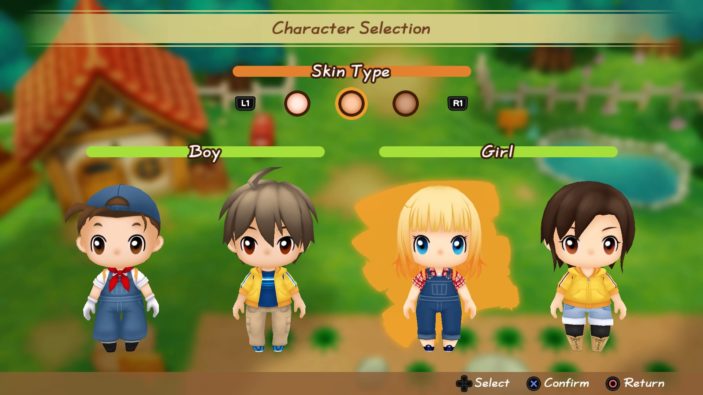 Historically, Harvest Moon games didn’t have an in-game choice of protagonist. You could play as either a male or female character depending on the version you bought. There were no options to customise appearances. In Story of Seasons, you can choose a boy or a girl, there are three skin shades to select from, and a wardrobe to access shortly after. While these are certainly steps in the right direction for diversity, it’s nowhere near the level of customisation in something like Animal Crossing.

Still, this latest version has worked harder to be more inclusive. Previous titles only allowed heterosexual relationships when it came to romances. Some later versions did include ‘workarounds’ for same-sex marriage, but there’s no need for that here. Story of Seasons marks all romanceable NPCs with a grey heart next to their name. This indicates that anyone, regardless of how they identify, is available for lovin’.

Like any remake, better graphics are probably one of the most welcomed improvements. Story of Seasons has not strayed far from the original designs, which were adorable to begin with. The cows are just as cute as I remember but the added roundness gives them an even squishier look. Certain character designs have been refined so they look more modern while still retaining that country charm. I prefer the 90’s look on my best girl Elly/Elli but Doctor, Popuri, Gray and most of the cast have all been changed for the better. 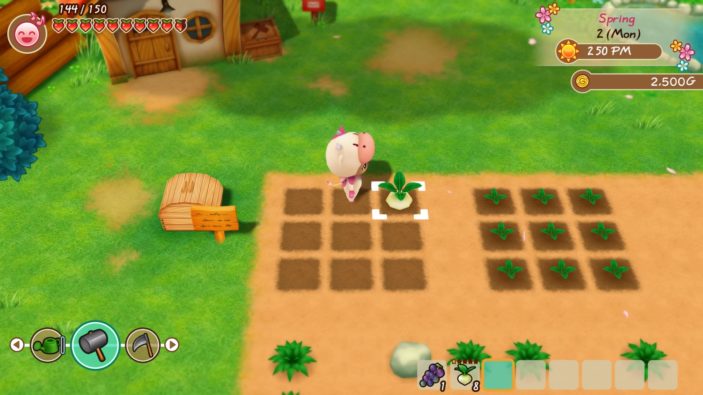 The core farming gameplay is smooth and familiar. I could feel muscle memory from years past stirring up inside of me as I began the lovingly monotonous chores of weeding, tilling and planting my crops. It’s as I remember it but with significant improvements. Picking up items now automatically puts it in your backpack, a simple but much needed mechanic. I used to drop things all the time (which means you lose them forever) by hitting the wrong button accidentally. When you’re working on the farm, a square now appears to show you the exact part of the land your action will affect before you commit to it. Depth perception in the game can be hard to ascertain so this feature is very helpful so you don’t accidentally pour seeds on untilled land.

The fatigue/stamina bar is now visible which is very helpful to know how much you can push your character without fainting. And for full idiot-proof measure, visual tutorials now automatically appear every time you enter a new area with a new activity. Most of it is fairly intuitive to begin with but it helps new players understand, because let’s face it, no one reads the tutorial books provided on the shelf in your house.

There really isn’t much to dislike in the game but if we’re being nitpicky, here are a few. The sprites who you befriend to assist you with chores now come with mini games to help you improve their skills. I wasn’t a big fan of this as it felt like bad filler content. Practicing water plants with them for example was basically a child’s memory game.

In game time passes insanely quick, this is not the game for players to stand idle while scrolling on your phone. But it’s often not proportionate to the activity. It takes me over an hour of in-game time to run into the town to give gifts to my friends. To keep pace with the farm work, I found myself working my character up until 3 am in game time, which meant would she would wake up late and the cycle would continue. I felt like I was constantly in a rush when I really wanted to take the time to talk to the townspeople and appreciate the view. 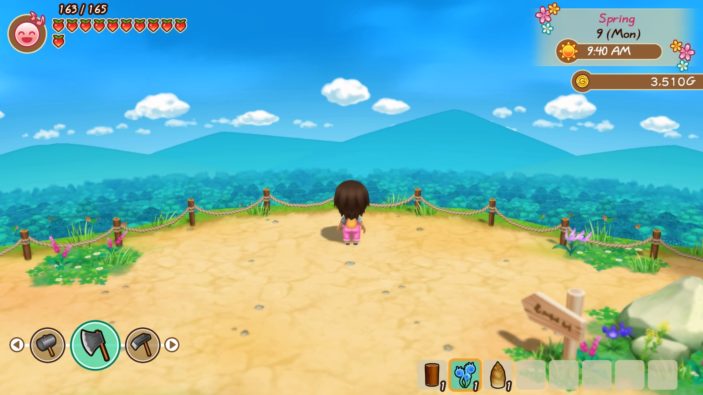 From the moment I could put my character in a pink cow suit, I knew I was going to have fun with this. Improvements with game remakes are a given but what they’ve specifically chosen to build upon in Story of Seasons: Friends of Mineral Town feels so in-step with how players game today. Fans of farming and dating simulations will not be disappointed with the latest iteration of FOMT. As a born and raised city-slicker, I might never achieve my dream of starting my own sweet potato farm out in rural Japan. But for now I think I’ll be just as content living vicariously through my little chibi farmer.

Highlights: Everything you love about the original Harvest Moon games, but better
Lowlights: Not enough hours in the day (how like life)
Developer: Marvelous Interactive
Publisher: Xseed Games
Platform: PlayStation 5, PlayStation 4
Available: 15 October 2021