You may be wondering what new grounds Nintendo could explore with Splatoon 3, especially when Splatoon 2 is already such a thoroughly enjoyable experience. I was too. Yet, what may initially come across as laziness in minimal core changes to multiplayer soon becomes an experience of wonderful re-identification of the Splatoon series. Splatoon 3 is more than just a reskin of its predecessor, it’s a new direction for the series. Keeping the core of the machine but introducing welcome gameplay and quality-of-life upgrades, Splatoon 3 takes all the elements that have made the series great across past years and combines them into a perfect synthesis of Splatoon fun.

Upon the release of Splatoon 2, many fans were excited by the new changes in both the single-player and multiplayer experience. Fans and critics alike praised the ways in which it deepened the experience, allowing more depth and nuance in the basics. Splatoon 2 had the opportunity to iron out the obvious kinks from the first-time efforts of Splatoon. The question was raised then as to how Splatoon 3 could further capitalise, especially considering how little Splatoon 2 missed in nailing the overall experience of the game. 2018’s Splatoon 2: Octo Expansion gave everyone a glimpse of a direction forwards for the then upcoming Splatoon 3. Pleasingly, I am able to confirm that all that was so loved about Octo Expansion has been carried to Splatoon 3 in all its music-driven, paint-covered freneticism.

A NEW APPROACH TO SINGLE-PLAYER

Everyone knows of Splatoon as an online multiplayer, paint blasting, non-stop action kinda game, so single-player story mode has always fallen to the wayside. Story mode has been little more than a tutorial in disguise, a way to introduce players to the mechanics of the game and get them online as soon as possible. Well, Splatoon 3 does away with this approach and very welcomely introduces a single-player mode dubbed ‘Return of the Mammalians’. Although you get off to a slightly worrying start, you eventually get to explore Alterna, a deserted research facility and a wonderful new sight for players.

The story mode overall isn’t too long. You’ll probably find yourself completing it in about 10 hours, depending on your extra content completion. You’d be able to complete it faster if you were looking to speedrun it. It’s short enough that I would say that you should definitely play it, even if you’re getting the game primarily for the multiplayer.

It’s here that you get to explore the unique, fuzz covered islands of Alterna with your new pocket-sized companion Smallfry. By charging him up with Power Eggs, which you collect from the missions, you can lob him at the fuzz to clear it. You get to carve your own way through Alterna, deciding which paths to take between successive missions, or whether to clear the whole island before entering any missions. It adds a level of personal touch well-needed in the single-player experience.

Upon entering missions, you will find a slew of new challenges and modes which, unlike Splatoon 2, don’t feel like tutorials in disguise. Instead, you get unique challenges which often you may need to do a few times before getting the hang of them. You get mazes that you have to navigate once before they turn on their side for you navigate all over. You have simple run and guns that wonderfully combine the freneticism with difficulty.

Combine this with the fact that Alterna is a vibrant, bright new location with plenty of nooks and crannies to explore. I was deceived early on by the extent of Alterna’s geography. As you navigate the map you begin to find new mini-challenges, different ways to travel and just cool looking locations to marvel at. The paint that you splat is equally vibrant, with your Inkling’s paint and Octarian goo looking extra-detailed compared to Splatoon 2. 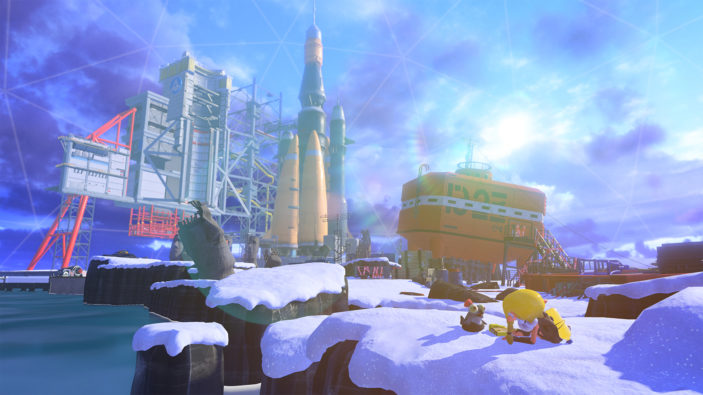 Overall, Splatoon 3’s story mode is a fantastic upgrade over its predecessor, expanding upon the fantastic style of gameplay of Splatoon 2’s Octo Expansion. You get a great mix of unique missions and semi-open world exploration. The modes are great fun and the time to beat is short enough that even those who plan to solely play online could find time to enjoy the story. All of this contained in Alterna, a great new setting for the series. It’s a great new direction forward for the series.

One of the hardest things for Splatoon 3 to improve on from its predecessor is multiplayer. With single-player, there was an obvious change to be made, a clear line forward. For multiplayer, it’s not so easy. Yet, Splatoon 3 brings to the table fresh new upgrades for its multiplayer modes. It expands upon the core game, not exploring grounds too unfamiliar to returning players. It’s a mix of quality-of-life upgrades and new content.

Among the well overdue changes is the ability to finally queue with your friends on the same team in casual matches online. Thank the Nintendo Gods that has finally been introduced. On top of this, you get an expansion of the weapons and their specials. You can fire three paint arrows at once with the Tri-Stinger or Spiderman around with the Zipcaster. There’s now ink vacs and Trizookas, Crab tanks and Big Bubblers. A few upgraded weapons from the first Splatoon game, so nothing too outrageous. 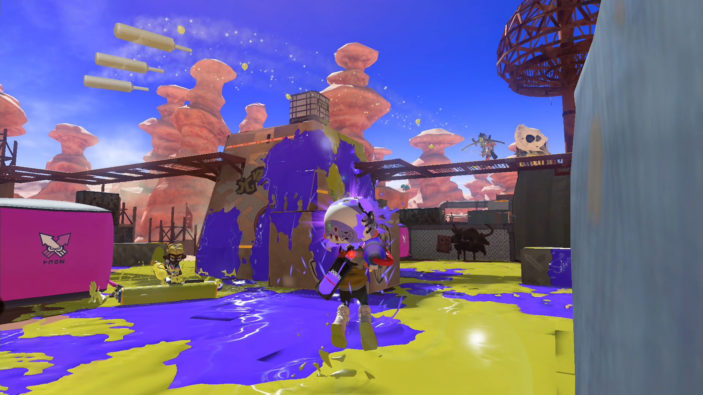 Overall you sense that amongst the new weapons there is a focus on the defensive, team-oriented side of the battles. Take the Big Bubbler, a special which provides you and your teammates with a large spherical barrier inside of which you can’t be hit with enemy ink. Or, using the Ink Vac, you can now suck up enemy ink and fire it back at them, helping clear the map in the process. It’s a welcome change that creates a more dynamic approach for players to take in online matches.

In unranked online games, you will be able to experience the fairly familiar Turf War battles. It’s the expected and most recognisable of the Splatoon series game modes. In it, both teams get three minutes to cover as much of the map as possible. It’s remained largely unchanged throughout the years, but this year you get to experience new stages throughout the battles with maps such as Mahi Mahi revealing new areas to explore and splat throughout. Add onto this the new movement changes, such as Squid Roll and Squid Surge. Squid Roll gives players the ability to switch swimming directions in ink without losing speed. Squid Surge, on the other hand, gives players a surge of speed when travelling up inked walls. Both of these add a new dimension of mechanics for players to master and add to their battle toolbox.

You’ve also got the returning favourites in Anarchy Battles, Splatoon 3’s ranked play. You’ve got Tower Control, Clam Blitz, Splat Zones and Rainmaker. All game modes from the last game, but all benefiting from the introduction of the new movement mechanics. There’s also Salmon Run: Next Wave, Splatoon’s returning horde-style game mode. Although Salmon Run may not get much attention, it still is a fairly enjoyable game mode which you can play with up to three of your friends. You can use the same new movement abilities, while also collecting the usual Golden Eggs. It’s enough fun, especially with your friends, and definitely received a facelift from Nintendo to allow new movement which helps it feel tight and quick.

Splatoon 3 assuredly expands upon and betters the series in substantial ways. It’s not just a reskin – a new paint job – it’s a new approach to the series. They managed to listen to the fans and better the single-player mode, whilst also bettering the already fantastic multiplayer modes, although not in such a substantial way. It’s full of major changes, but also random little things which will keep you busy for at least a few hours. 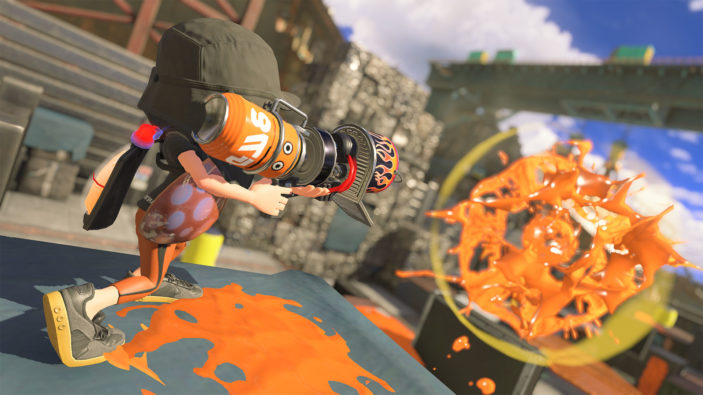 Amongst the countless little things, you’ve got the locker where you can customise your Inkling with a smattering of collectables; it seems everyone has found their own little joy in this. You’ve got the new mini game mode, Tableturf wars, a little map-conquering card game. And of course there is the new and beautifully improved Splatsville, which, seemingly inspired by Tokyo’s high-tech metropolis, provides a surprising amount of exploration. It’s tall and gorgeous and full of back alleys and paths. You also get a fantastic little pre-game lobby where you can practise your aim on the dummies and fiddle around with your weapons.

It’s a lot of this – small changes which you stumble across and sink odd hours into – and of course the major changes. It’s a joyous experience, a true Splatoon game. It will be sure to satisfy the purists of the series and those playing for their first time. Surely it will prove to be one of the best multiplayer games this year. You must give it a go when you can; it’s sure to stick around for the next few years.

Review conducted on a Nintendo Switch OLED model with a pre-release code provided by the publisher.