Saints Row the Third Remastered Review: Praise be to Volition

It’s not enough to simply write that the new remaster of Saints Row: The Third features, and is defined by, substantial “graphical enhancements”. The off-the-wall Volition title, the one where they decoupled the series from “GTA clone” criticism and carved their own successful niche, has gone through a complete overhaul. And it’s fucking gorgeous.

We’re talking an absolute and all-encompassing rethink to how the entire wacky experience comes together, running through the game with a fine-toothed comb, bristles built with all the tricks in the book like ambient occlusion and physically based rendering. It retains the comical, slapstick aesthetic balanced with urban grit, but turns in something brighter, more vibrant and visually improved in almost every conceivable way.

Even the menu pops harder, running over into smooth and improved character building which throws more customisation options at you than you could reasonably expect.

What A Remaster Should Be

All remasters of older games seek swift graphical updates to contend with modern titles. Volition haven’t just done that, they’ve completely redefined the way Saints Row The Third unfolds. Assets are more realistic and detailed, from guns and holes in the wall, the physicality of these built-from-scratch characters looks more natural, from every muscular t-shirt crease to whatever hairstyle you choose, and the city of Steelport no longer looks (as) dreary as it did all those years ago. Daytime brightness is substantial, but it doesn’t saturate everything, with perfect shadowy detail whether you’re speeding through the streets or running down an alley.

The game runs at native 1440p and 30fps on Pro consoles (1080p on regular PS4 and Xbox One) but can be pushed up by unlocking the framerate in the menu. I kept it locked at 30fps on my regular PS4 for most of the game, to be safe, but had no issues on 60fps aside from a slight dip in one particularly intensive scene filled with explosions. 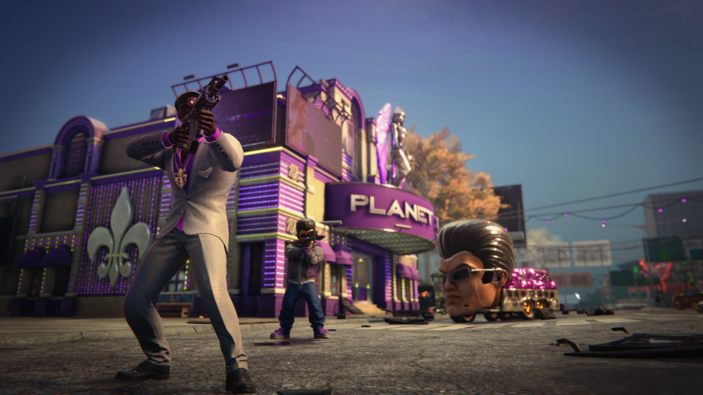 The meaningful visual upscaling means that all this bizarre action feels more intense and purposeful, having a knock-on effect that improves every aspect of the experience. And Saints Row the Third really is an experience. While the city still doesn’t feel as lived-in (more traffic and pedestrian density aside) as say Vice City in the GTA franchise, and characters can feel obnoxiously overexaggerated at times, there isn’t a moment in Saints Row The Third that feels dull or unhinged from the game’s purpose.

And that purpose really is just giving people a fun, addictive game. It held up then, and it holds up now, for better and for worse.

Nothing about the gameplay has been changed. This isn’t a remake we’re talking about. So you can still expect clunky vehicle movement, dumb AI, uneven difficulty spikes, and overplayed humour that on the ‘Borderlands 3 cringe scale’ is about a hard 7. 10 being Claptrap. Saints Row the Third shows its age when it comes to mechanics and humour.

No One Knows What It Means, But It’s Provocative

There are many jokes in the game that don’t feel relevant anymore, which really isn’t a mark against this remaster but rather a natural problem with it existing in the first place. Saints Row the Third was first released in 2011, and managed to offend quite a few people even then. It’s 2020 now, so you can imagine there are more people who would take issue with the slapstick caricatures that carelessly touch on sensitive topics like sex work and race.

Despite this, characters are well-written, have engaging arcs that hold meaning for the game, and dialogue still flows really well. It cribs heavily from African-American Vernacular English, but there’s nothing anywhere near as grotesque and perverse as the Tik Tok generation’s obsession with “speaking black” and using culture as comedy. Caked in the game is the prevailing difference between the 2011 and 2020 zeitgeist; Saints Row the Third isn’t trying to be woke and has an abundance of self-awareness.

Those new to the franchise should take note. While this is the best way to enter the Saints Row universe, the IP has a very particular identity, and it’s not for everyone.

Aside from the ridiculous amount of love and effort that has gone into beautifying the game, Saints Row the Third Remastered offers value far beyond the price tag. Every piece of DLC is included here, totalling more than 30 pieces of DLC in addition to the missions of the Genkibowl VII, Gangstas in Space, and The Trouble with Clones expansion packs. Granted, the expansion packs aren’t long enough to be considered substantial, but that’s still a comprehensive and generous offering for fans. Even better for newcomers.

There is no denying the care and attention Volition has given Saints Row the Third. It’s a love letter to the game and to the fans, with more effort put into this than any other Saints Row remaster to date.

Of course, this is probably because they want to reintroduce their definitive title before they can begin building hype for the recently announced Saints Row V. But whatever the reason, I’m glad it exists.

Highlights: Incredible effort from the Volition team; painstakingly detailed remodelling and effective lighting; Steelport brims with more personality.
Lowlights: Visuals can’t atone for some clumsy mechanics; dated jokes don’t land and feel jarring; even at 60FPS, it can dip at times; not much to do aside from story and side missions.
Developer: Volition
Publisher: Deep Silver
Platforms: PS4, Xbox One, PC
Available: Now