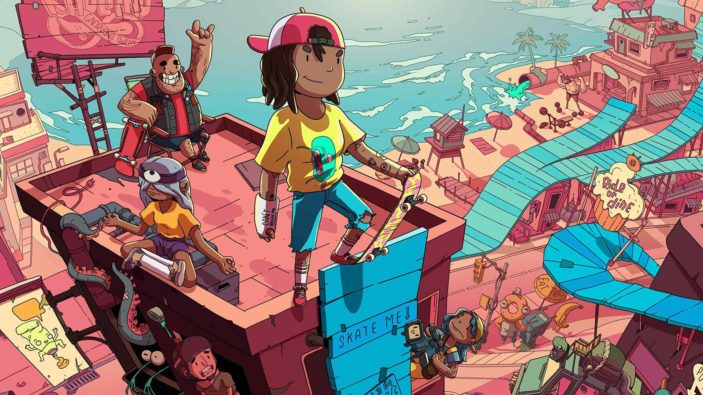 The third entry in the OlliOlli series combines the fun of learning to skate on shiny new consoles alongside an expansive world with varying locations that constantly change up the way you play. Developer Roll7 has incorporated a story mode into the series this time around with an overhaul of the graphics engine adding a 2.5D feel in the style of cartoons like Adventure Time and We Bare Bears. While previous games have been aimed at experienced players, this time around, OlliOlli World takes a more inclusive approach giving an easy introduction for newcomers while still being able to challenge seasoned players with a new control layout and graphical overhaul with a tongue-in-cheek sense of humor that makes it so accessible for both new and returning players.

I am a huge fan of the series, having played OlliOlli and OlliOlli: Welcome to Olliwood, hitting the frustratingly difficult challenges and rage quitting. Fortunately, on my playthrough of OlliOlli World, this didn’t happen at all. The control layout is different from the first two games, the most notable improvement is not needing to press X to land the perfect jump. While you can definitely land the perfect jump, it is no longer a requirement to progress with the game. Similarly jumping over obstacles, performing a kick-flip, and grinding against rails and walls is much easier in this new title. I played this on the Nintendo Switch in both handheld and docked mode and found the joy-cons a great way to play. When I switched into the docked mode, using the Pro Controller was just as responsive and the clicky thumbpads work well with this game. 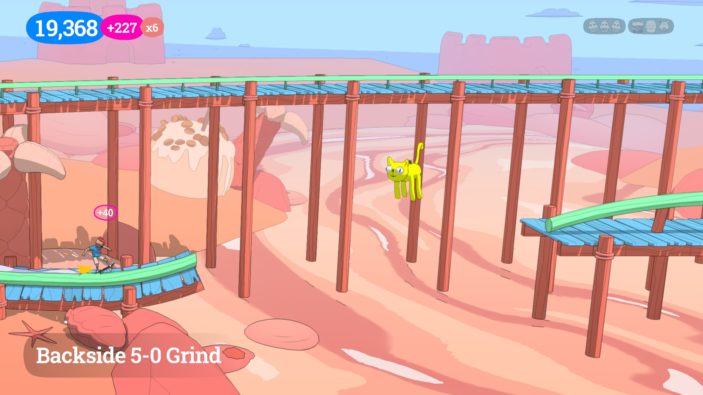 The game does present a premise, you play as a character chosen to be next in line for the skate wizard Chiffon. You need to travel around the different areas, perform moves and reach the next level of Gnarvana. It’s such a fun premise and makes the intensity of the controls even out the fun. You’ll use the left thumbstick to perform tricks and the right thumbstick to perform grab moves. You can also move your character back and forth easily and speed up with the ‘X’ button using your leg to pick up speed.

If you are worried about feeling lost, being the third game in the series, don’t be. It is really easy to jump in as this really is its own thing. While having the knowledge of the previous games is a handy benefit, it is not essential to get enjoyment out of OlliOlli World. I did enjoy that there are now checkpoints in each level which means unlike the previous games, you don’t need to go back to the start and reattempt the whole level again. The game does give you the option to go back to the beginning or re-spawn which can be handy if you are stuck in a loop and need to start fresh (it happened a few times to me!) 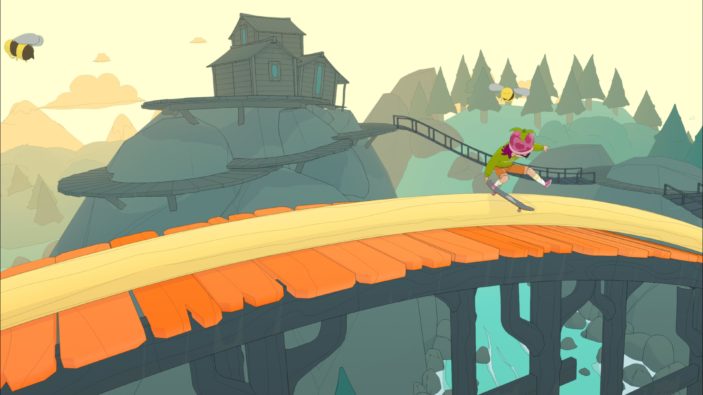 I think my favourite thing about this game, and particularly having it on the Switch, is I can sneak in a few quick games on short commutes, on quick breaks at work and it is easy to jump in and out as you need to as well as moving it into the docked mode for a longer play. This game feels completely at home on the Switch with its beautiful neon environments and colours shining out from the system. The music is supplied by a bunch of DJs which adds to the cool factor that this game is going for.

OlliOlli World feels like the team at Roll7 has finally cracked the perfect blend of skateboarding mechanics combined with a new 2.5D, vibrant art style and a great soundtrack. Moving the games to the handheld system allows for the game to be played successfully in short bursts which will put this game in heavy rotation in my Switch library. Fun gameplay and beautiful graphics are the names of the game. Make sure you don’t sleep on OlliOlli World.