Games Review: Mint Berry Crunch arrives in South Park: The Fractured But Whole DLC, but it’s the “Final Girl” who saves the day

The final DLC expansion for Ubisoft’s acclaimed South Park: The Fractured But Whole has arrived. The Bring the Crunch DLC introduces Mint Berry Crunch to the story, a character who appeared in early promo shots but didn’t make it into the base game, a brand new part of town (Lake Tardicaca) and a new class called “Final Girl”, as the game adopts a horror themed storyline.

Accessible automatically via the DLC bus if you own the Season Pass, or separately for $17.99 AUD if you didn’t, this added storyline takes us to Lake Tardicaca. A summer camp for the handicapped, Lake Tardicaca is where Mint Berry Crunch arrives in game, and a story featuring Jimmy, Butter and, in part, Timmy alongside The New Kid begins.

Though the landscape you get to explore is larger than in the From Dusk till Casa Bonita DLC, without the arcade there’s less replay value once you’re done. It is slightly a longer storyline than the last DLC, and there’s a lot more to do, with tonnes of new selfies and a variety of tasks to complete — including a couple of the most difficult puzzles I’ve seen from the game so far (I genuinely gave up on one of the treasure chests which was only accessible through a very clever use of the time fart system they hadn’t explored until now).

One of these tasks, which continues even after the credits roll on the main story, sees you collect merit badges for a powerful new artifact. This was a nice touch, and sees you doing some “helpful” things around camp. The storyline itself isn’t as fun nor as funny as the game has been in the past — they go for a darker approach here which is entertaining for its own reasons. Some of the battles bringing back elements they’ve already explored in the game to date; though the new superhero class “Final Girl” (hilariously inspired by the one girl who survives the end of horror films but then is the first to die in the sequel), does add some new life to the experience. The “final girl” ultimate is the best the game has seen so far, though you didn’t seem to be able to use it all that much outside some specific battles. 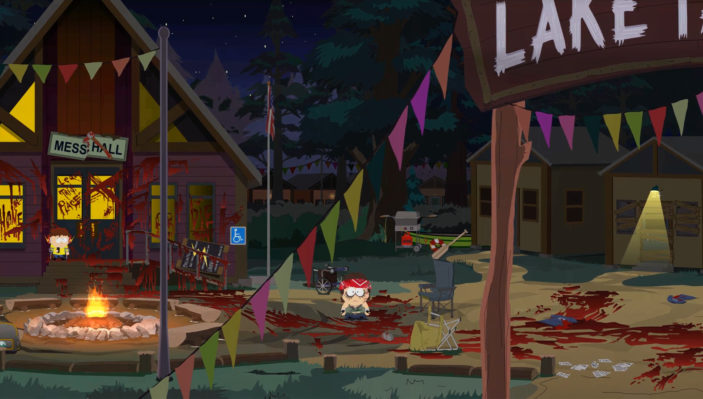 Of course they sneak in some topical references in there – where James Woods was a focus in the From Dusk till Casa Bonita DLC, look out here for a Kevin Stacey mention, the brief return of Lorde’s “ya ya ya”, and finally you’ll be able to push past 811 with 110 new additions to your artifacts thanks to the merit badges. You’ll finally see some truly entertaining use of your “kryptonite” too. I also got a kick of of the game’s use of “mint” and “berry” which of course exist in opposition, within gameplay.

Taking out the puzzles and the battles, the story felt like the length of a normal South Park episode. It even ends like an episode. It makes me wonder if they can deliver these sorts of experiences more often. I know I’d pay for it. And then there’s still more to do in the camp once you’ve ended the main story; badges to collect, crab people to fight and selfies to collect. Unlike the last DLC which, in spite of some mini games being inaccessible, was pretty much done once it was done. It’s a darker episode, but brings with it its own charm and enjoyable gameplay. There’s a couple of challenging puzzles along the way, and the battles are tough. And there’s a LOT of blood.

While Bring the Crunch is the last of the planned DLC releases that were announced when the game was launched and included in the Gold Edition of the game (along with the gradual releases of the Danger Deck, Casa Bonita DLCs and the PS4 port of The Stick of Truth), it’s not clear if this will be the last DLC we see for the game. In the meantime, it’s served as a strong way to curb our appetite for more South Park content until the 22nd season hits screens next month. I know I’m still hoping for a 2D Canada DLC, which they reference as a possibility (“I dunno guy! Maybe we’ll add a DLC or something!” when you approach the wall established by South Park’s version of Trump, now deceased.)

Jump on in and be the Final Girl you know you’ve always secretly wanted to be.

Love It: Great new superhero class, engaging storyline, difficult puzzles, excellent use of new characters both in and out of the DLC, including Mint Berry Crunch, and some pay offs for earlier decisions in the game.
Leave It: Some repetition in battles, less mini-games than last DLC, the end of the scheduled DLCs.
Platform: PlayStation 4, Xbox One, Windows PC, Nintendo Switch

Bring The Crunch is available now. Review conducted on PlayStation 4 using a Gold Edition copy of the game provided by the publisher.