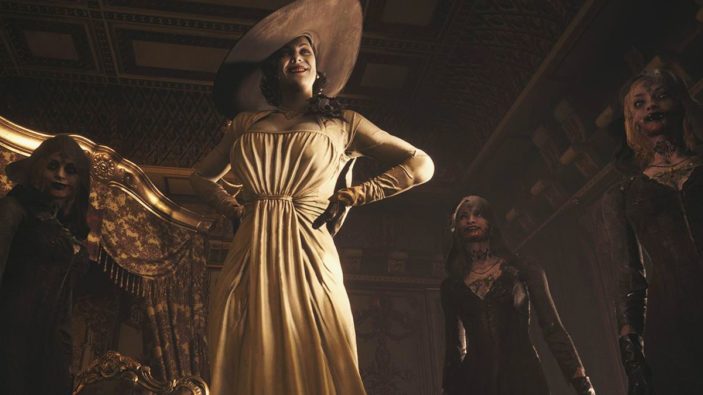 Set several years after the events of Resident Evil VII: Biohazard, Ethan Winters has moved into the sticks with his wife and newborn daughter. When their lives are upended yet again by the intrusion of Chris Redfield and his military bros, Ethan finds himself on a mission to regain custody of his missing baby girl. His quest finds him stranded on the outskirts of a densely wooded village somewhere in eastern Europe.

The small village has been overrun by a who’s who of Western supernatural horror — werewolves, vampires, witches, and more. Four area bosses guard the game’s primary biomes, small vertical slices of distinctly Resi gameplay — Lady Dimitrescu’s castle, for example, recalls the labyrinthine mansion of the original Resident Evil. In this way, Resident Evil Village becomes an ode to chapters and settings within the wider series. It works to recontextualise them, while also doing everything it can to subvert the expectations that go along with each remembrance.

Also returning is the grid-based inventory system familiar to long-time fans. Like shuffling items around in a backpack, the grid inventory tells players, if it doesn’t fit, you have to leave it. It becomes a kind of sliding puzzle, with players turning items this way and that to create the most efficient storage array possible. Not everything is stored in the inventory, however. Trinkets and jewellery stolen from the village and its surroundings can be fenced at a mysterious vendor-cum-weaponsmith who always seems to turn up right when you need him most. The gold in your pocket can be converted into supplies or weapon upgrades as you progress through the game.

These weapon upgrades are essential to your success. The initial weapon, a pistol, is woefully inadequate but improves markedly as you upgrade it. Its follow up, the shotgun, fares rather better. As in Resident Evil VII, the aiming on console leaves a lot to be desired. It actually seems to work better if you turn the aim assist off. On PlayStation 5, the adaptive triggers are used to denote the weight of the trigger on each of your weapons. Pistols have a very light trigger and fire easily. The shotgun is heavier and harder to pull. The sniper rifle stiffens the trigger to the point where I worried I might break it. Your mileage may vary on this particular feature. While I didn’t mind it in general, I know several players who were outright annoyed by it.

Capcom’s RE Engine software continues to impress, with Resident Evil Village being one of the prettiest entries in the series to date. Faces and character models are rendered in exacting detail. Maps are filled with minute flourishes and carefully positioned horror lighting. From the cluttered, destroyed village itself to the claustrophobic crawlspaces of Dimitrescu’s castle, it seems like there’s nothing it can’t handle. Every biome creates not only a sense of dread but a sense of purpose-in-design. There’s a reason for this path in the forest to be here. There’s a reason this person decorated their rustic village home the way they did. Remarkably, RE Engine is capable of the visuals it can produce while keeping the download size of entire games so low, especially compared to other AAA releases.

Games that look this good, in this day and age, often mean 80GB downloads or more. In what might be its greatest trick, Resident Evil Village conceals its many design cheats and graphical illusions to remain an exceptionally lean 30GB on PlayStation 5. In an age where Aussie players aren’t able to play on launch day due to downloads and patches, Village is a breath of fresh air.

Resident Evil Village is a strong entry in one of gaming’s most beloved franchises. It pays respects to the games that came before while trying to subvert player expectations and show them something new. It’s a technical marvel that succeeds far more than it fails and will be ranked as a fan favourite for years to come. Resident Evil remains the king of survival horror, and long may it reign.

Review conducted on PlayStation 5 using a retail code provided by the publisher.