A remake of Resident Evil 3 was only a matter of time. After Resident Evil 2′s critical and commercial success, it made sense for Capcom to continue their hot streak. And so, only a year later, it’s here. Resident Evil 3 proves the franchise is alive and thriving, creatively reimagining and modernising older titles in its library. It’s more of what you liked about RE2 — a tense campaign that looks every bit as good as it plays. While it lacks its predecessor’s replayability, my journey through the final days of Raccoon City is one I won’t soon forget.

The Final Days of Raccoon City

Resident Evil 3 follows Jill Valentine, a S.T.A.R.S officer thrown into the chaos of Raccoon City’s final hours. As the outbreak worsens, Jill joins the Umbrella Corporation to help evacuate survivors out of the city. What seems initially like a clear cut survival horror story becomes an engaging (if brief) tale full of twists and turns. The cherry on top is Nemesis, an unpredictable monster that relentlessly hunts for Jill. If you’ve played the original Resident Evil 3: Nemesis, you’ll find the campaign to be more or less the same. But thanks to gorgeous new visuals and gameplay, RE3‘s most cinematic moments are elevated to new heights. There’s a new sense of tension to the narrative that I admit I never felt in the original.

Encounters with Nemesis are terrifying. Each time he shows up, there’s only one thing you can do: run. While he bears a strong resemblance to RE2‘s Mr. X, it’s the cinematic quality of each Nemesis encounter that makes them scary. The trade off is that they are authored — he won’t show up at random like Mr. X. That Mr. X could show up at any time and follow you anywhere created a constant dread. While this feeling carries over, the game makes it very clear if and when you have evaded Nemesis’ clutches for the time being.

The campaign itself is quite short, clocking in at around 6-7 hours. You can extend that depending on how hard you plan to hunt for collectibles. The pace of Resident Evil 3 feels much faster that that of its predecessor. It leans more into action than RE2, but retains strong survival horror elements woven throughout. While I enjoyed my initial playthrough, I did miss certain aspects of RE2. The lack of multiple campaigns hampered replayability, especially given the shorter runtime.

While players do take control of Carlos, an Umbrella Corporation soldier, these segments are short-lived and infrequent. There are reasons to go back however, including unlocking a shop that allows for overpowered abilities such as infinite ammo for certain weapons, which really come in handy should you choose to replay on a higher difficulty. Aside from that however, I felt that Resident Evil 3 did less to beckon me back to its narrative, compared to the dual-narrative of Resident Evil 2. 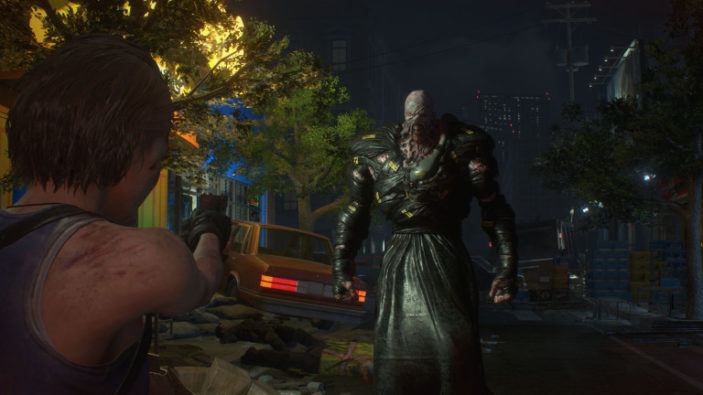 Playing Through The Long Night Ahead

Resident Evil 3 largely succeeds on its mechanics, adjusting its survival horror angle to add a focus on combat. Jill is no rookie cop and knows her way around a gun. Thus, gunplay has been slightly tweaked this time around, with quicker draw times and less sway when aiming down the sights. Don’t worry — you’ll still find yourself fumbling a perfect shot when you’re all alone in a dark hallway. Traversal and movement remain the same, while a dodge has been added to further emphasise Jill’s athleticism. Timing your dodges is of the essence, as a perfect dodge will slow time for that much-needed precision attack. 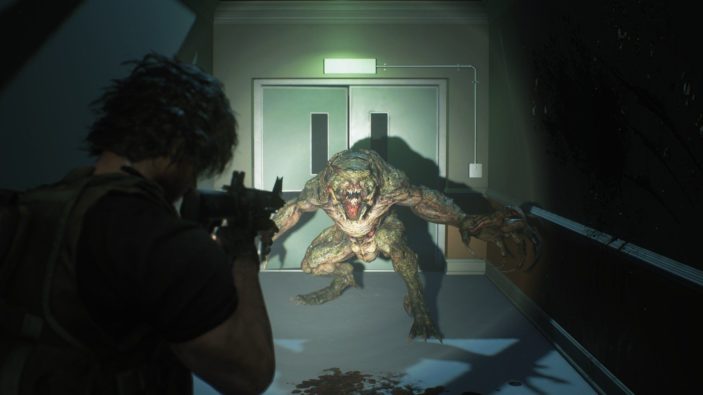 Traversing Racoon City is also a blast, with most areas recreated in painstaking detail. Resident Evil 3 features more colourful art design, using its city streets as a canvas. It’s also here that various lighting techniques contribute to the overall polish of each environment. Backtracking is required but, as Resident Evil 3 moves so quickly, its environments are less maze-like and more a distinct path. I didn’t mind this approach, as you’re less likely to get lost on the way to each new puzzle.

To compensate for the shorter campaign, a new mode called Resident Evil Resistance has been added to this package. RE Resistance is an asymmetrical multiplayer mode in which a team of humans work to defeat franchise villains. It’s disappointing that while Resistance is totally functional, it’s not all that fun and ultimately a little shallow. Players take control of either 1 of 5 survivors, or 1 of 4 masterminds, most of which are famous villains from various instalments of the franchise. Survivors must traverse the map, dispatching enemies and avoiding traps. Masterminds create these obstacles and occasionally control an iconic series villain to wreak havoc on other players.

Thankfully, gunplay is as good as it is in Resident Evil 3’s campaign, ensuring combat is tight and responsive. Beyond this, none of the survivor’s abilities meaningfully affect gameplay. The answer is always the same: gunplay prevails. In this way, players are actually better off choosing support characters with boosted healing abilities. If there’s no penalty to shooting, why wouldn’t you? Maps offer no further variety, the options being Old Dark House or Laboratory both of which feel generic.  None of these maps encourage exploration or meaningful branching paths, instead opting for large rooms for you to take on the same generic enemies. 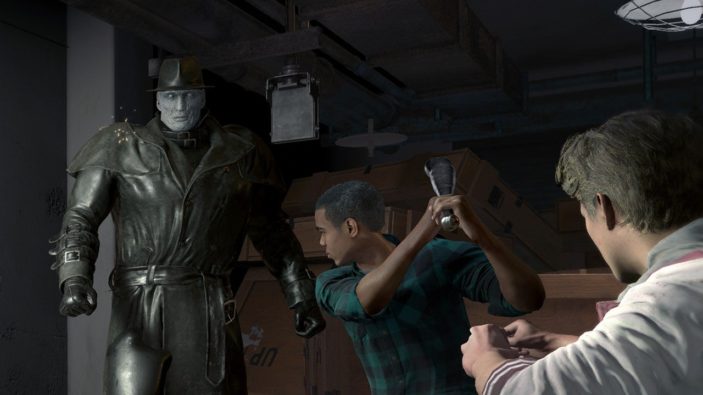 Playing as a mastermind, however, is a different story. Masterminds use security cameras around the map to place their traps. Every now and then, masterminds can control certain zombies and iconic RE villains, which is an ultra-satisfying power trip. Masterminds do affect the gameplay in different ways, each one having unique abilities. Alex Wesker, for example, can throw advanced zombies into the mix, which other masterminds cannot access. You get the idea.

Players do earn points after each match in order to purchase loot chests, but as annoying as it sounds, XP gained is exclusive to the character that you just used, making playing as multiple characters underwhelming provided your’e looking to flesh them out through customisable options. Boosters come from loot chests earned in-game or purchased with real money if you don’t want to grind. It sucks that the most interesting items come out of chests rather than though gameplay.

Throughout my time with Resident Evil Resistance, I could definitely appreciate the asymmetrical structure of each match, strong gunplay and interesting mastermind mechanics, but after spending as much time as I could with it, I couldn’t help leaving the experience with a bitter taste in my mouth, as the few strong positives soon became outweighed by the vastly bland negatives, which left the experience feeling disjointed and a little rushed.

Overall, Resident Evil 3 is an incredibly impressive package, given the disappointing Resident Evil Resistance. The stellar campaign kept things tense, engaging and polished on a consistent basis, throwing in some memorable encounters and cinematic boss fights. While it retains many of its survival horror roots, Resident Evil 3 is most definitely a departure in tone, given it’s action-oriented nature. This is in no way a negative however, as the strong gunplay and mechanics carry the weight at all times.

The lack of replay-ability may be frustrating for those that enjoyed the dual-natured campaign of Resident Evil 2, but make no mistake, my initial play through of Resident Evil 3 was immensely positive. Resident Evil Resistance may bring with it some impressive gunplay and interesting mechanics, but soon falls under the weight of its own bland and repetitive nature, proving that while some aspects of the experience work, it in no way makes up for those that falter. If you’re buying Resident Evil 3, make no mistake; its campaign is one of the most impressive experiences of the year so far, and one most definitely worth playing through. If this is the future of the franchise, I can only ask for more.