No Straight Roads is a rhythm-based, action-adventure game created by Malaysian-based studio Metronomik, created by two cool dudes who worked on Final Fantasy XV and Street Fighter V respectively. Rock your way through Vinyl City as Mayday and Duke to rid the world of the EDM empire!

I’ve been looking forward to playing this game ever since Wan Hazmer (FFXV) mentioned it during a conversation I had with him some years ago. I got even more excited when I saw the teaser trailer for the game – and now it’s here!

Are you ready to rock?

Forget about those with photosensitive epilepsy, I think everyone should be wearing shades if they want to play No Straight Roads. This is probably the brightest, most colourful game that you’ll play this year – maybe even this decade!

All the characters are larger than life. Mayday has flower petals for irises and Zuke is a mellow green man. Everyone is lanky and have large hands, some are more colourful than others.

But that thankfully doesn’t take away from how fun this game is. Quadruple that for me because of all the little Malaysian nuances that have been sprinkled throughout the game. I’ve lived in Malaysia for most of my life, so playing No Straight Roads was a rather refreshing experience.

Throughout the start of my play-through, I couldn’t stop thinking “hey, I know that voice! ahh, that voice is familiar too!” and I definitely couldn’t stop laughing when that one character was introduced. I love the Aunty that sits outside the Bunk Bed Junction’s base and I love that it looks like a mamak. It makes me feel mega-nostalgic and I love it.

But also that skyline. I’m not saying that you’ll see the Petronas Twin Towers or anything but NSR’s headquarters, the antagonist’s HQ, looks reeeeeaaaaalllyyyy familiar… I wonder why. 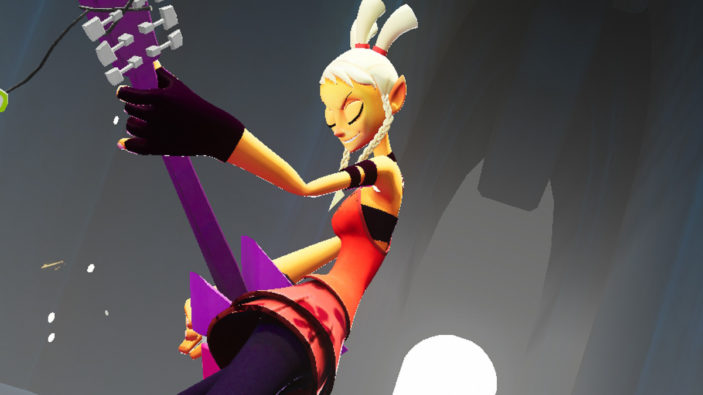 As a rhythm-based action-adventure game, most of the “rhythm” seems to come in highly specific areas of the game. And here lay a curious aspect to the game.

You don’t actually face enemies unless you’re approaching boss battles so just expect to glide-through Vinyl City, as if it’s an interactive ‘map’… While you’re going from A to B, you’ll also be able to pick up Quassa (little battery packs) which you can use to power up things around the city – which in turn can gain you Fans. You use “Fans” as currency for the Mayday, Zuke, and Bunk Bed Junction skill trees which are very helpful as you get along.

Vinyl City is really pretty, though, so I didn’t mind.

Holy crap, boss battles are tough. I don’t think I’ve gone through a single boss battle without dying at least 5 times. The worst part is that if you die 3/4 through the battle, you’re gonna have to start from scratch.

Despite everything, the game isn’t without its minor annoyances.

Your companion is an idle-NPC when not in use, so if you’re playing solo… You’re really playing solo. Whether you’re using Mayday or Zuke, the other character won’t help you fight enemies which can get really frustrating.

The controls are a tad bit buggy for my tastes. A single jump can get you places but once you’re off the air you have not much control of where you land. Once you unlock double-jumping, things can get out of control. They have gotten me into many-a-trouble during the game. Sometimes I got stuck in spots halfway through a boss-battle because I couldn’t move.

Plus, there are ladders that you can’t use even though there are items up the top of them… What’s up with thaaaaat? (You’ll have to unlock double-jump to get to them)

Vinyl City, are you ready to rock?

I have No Straight Roads for the Switch but I have no one to try out the multiplayer versions with. But I bet that would be fun times, post-COVID.

As much as I loved how bright and colourful everything was, it does give one a headache after a bit of playing. The music is great although some bits needed to have been smoothed out in order for it to seem like the game was truly rhythm-based.

I really, really wanted to love the game more than I do. It’s not very often that a Malaysian studio comes out with their own game, especially not one that’s as globally hyped as No Straight Roads.