Entering the world of Hob is a magical experience. With no dialogue, a minimalist soundtrack and a towering, robotic companion as your only companion, the world is beautiful – but empty. The wind whistles through the grass, trees sway and the earth breathes, but you appear to be the only humanoid around. It’s a world in disrepair, with nature being overridden by golden machines. It’s peaceful, in a way, but it can also be confusing.

Hob doesn’t have any active dialogue, instructions or directives. You begin the game in a wild land, and make your own way from there, discovering a range of weapon and ability upgrades and new pathways through the land.

These include a mechanical arm with a super-powered punch, a sword, shield and combos. Every ability you gain opens up your potential, and backtracking unveils new ways to reach your goal. What that goal and your purpose is exactly is mostly unclear, but in the end, it’s more about the journey towards getting there (and the friends you make along the way). 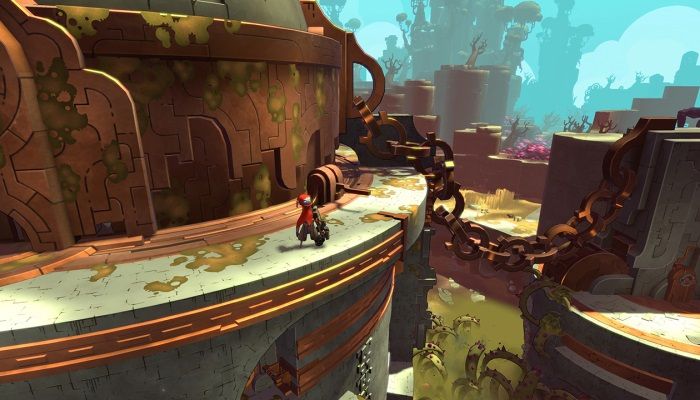 The journey, however, is not often smooth, and pathways are difficult to chart. Several times in the first few hours, I got stuck and had to look up guides to get through. Other times I had to knuckle down and try everything in my arsenal to advance. The map doesn’t help matters – it takes an incredibly minimalist approach, to the point where you can’t actually tell where you are or how to move forward.

Hob is not for the easily frustrated, and patience runs out fast when there appears to be little reward ahead. Coupled with basic dodge-and-roll combat and a range of personality-less enemies, Hob‘s gameplay can come off as uninspiring at first.

Where the game shines is in its environment-based puzzles. Traversing the land requires ingenuity and a hefty amount of lateral thinking. Puzzles aren’t always straightforward, and a simple jump can lead to instant death. But when you get them right, it really is a wonderful feeling. As the world changes around you, more puzzles reveal themselves, and with a range of concept art, new abilities and weapons to collect, there’s plenty of reasons to go exploring. 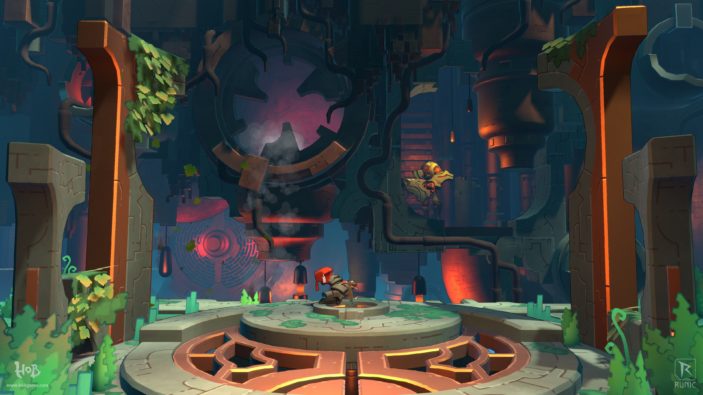 This edition of Hob comes with minor improvements from the original PC release, including rumble compatibility, better camera movement and a new, streamlined menu. Those who are experiencing Hob for the first time likely won’t notice much difference, but for returning players, it’ll be a welcome change.

First timers are likely to find the game somewhat frustrating, particularly in the opening chapters, as they become used to the story-lite, minimalist-heavy approach. But the further you travel, the more the game opens up, and a little ingenuity will go a long way.

As far as my own time with the game, it’s been a journey of trial and error, but I’m curious to see where the road will take me.

Hob was previewed on Nintendo Switch with a retail code provided by the publisher.