As we announced last week, Sony’s #PlayAtHome initiative returns this month, and kicking things off is the 2016 release Ratchet & Clank. If you remember #PlayAtHome from last year, this means the game is completely free for everyone! And it’s available right now.

You don’t need a subscription to Playstation Plus to enjoy this free game – just login to the PlayStation store on your PS4 or PS5 download the game, and get playing!

Ratchet & Clank is something that is surprisingly rare in the world of video games — neither an HD remaster nor a re-release of the 2002 classic, this is a full-blown, ground-up remake by the game’s original developer. Further, it is conclusive proof that, done right, a genre throwback can feel as fresh and innovative as it did on release nearly 15 years ago.

If this were Hollywood, the argument about Insomniac rebooting their flagship franchise only 14 years after its inception might have a bit of merit to it. In the world of video games, however, 14 years constitutes a technological epoch and Insomniac are taking full advantage of that fact, creating a retelling of the Ratchet & Clank origin that feels as modern and playable as many other AAA titles out there right now.

There are, however, a number of areas where the game has had to concede ground to the upcoming Ratchet & Clank film (trailer embedded below) so that their two narratives ties in a little more neatly. It’s not perfect by any stretch, but it’s hard not be excited to have one of the greatest gifts the PlayStation 2 ever gave us returned in otherwise pristine condition.

The game kicks off with an amusing but fairly rote tutorial section that reintroduces the core Ratchet & Clank concepts before bringing its two heroes together. Ratchet, a Lombax/cat-rat-man who can walk and talk, is a gifted mechanic stuck on an outer rim world and dreams of a life of adventure and galactic exploration like his hero Captain Quark. Clank is a robot created a factory that builds lethal warbots. He is kind and friendly and therefore fundamentally defective. Clank escapes the warbot facility and crash lands on Ratchet’s planet, the two teaming up to alert the galaxy to the growing warbot threat and the villainous characters behind it all.

Their journey will take them across twelve different planets on which they will run, jump and destroy enemies using a cache of cartoony weaponry. The weapons on offer run the gamut between ones we’ve seen in previous games and a few particularly juicy new ones.

My favourite new gun is the pixelizer, a weapon that is used like a shotgun and on impact turns your enemies into 8-bit versions of themselves which then collapse in lovely NES-era animations when killed. That doesn’t sound like much but I managed to spray and entire room of baddies with this gun and the death animations that followed were truly amazing and fun to behold.

Fun is key to Ratchet & Clank, especially when it comes to combat. If you wanted to get really nitpicky, you could lament the fact there are fewer ways to engage your enemy than in the PS2 era originals, but the truth is Ratchet & Clank does way more with the combat it’s got than than the originals ever did. Each gun in your arsenal can be upgraded a few times, which appeared in the original games further down the line, and can be upgraded even further with a currency called raritanium found scattered around each world.

What this means is that even your puniest weapon can become staggeringly overpowered if you’re willing to drop enough time and available resources into it. While my choices were more limited, I felt more compelled to make the most of the tools I had. The Pyrocitor is a perfect example of this. A perfectly average low range flamethrower, att first I wasn’t sure what to do with it, but as I began to spend raritanium on it I was able to boost its range, it’s total ammo capacity and it’s damage out went from “okay” to “woah nellie.” I ended up getting so much out of it that it eventually levelled up into a new gun called the Lavacitor that makes enemies explode and damage foes around them. AMAZING. Each gun upgrades in similar ways and it makes squeezing everything you can out of them that much more rewarding. 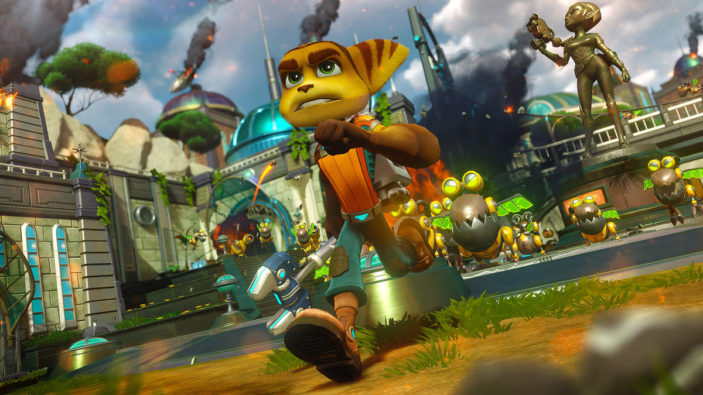 Each of the worlds in Ratchet & Clank recall the platforming silver age of the N64-to-PS2 era, with elements from previous games like hoverboard races, laser puzzles and rail grinding sections. The platforming on offer is basic at best, but it all looks and feels so lovely that you can forgive it for its shortcomings. There are a few new setpiece moments like Ratchet getting to pilot his ship in some Lylat Wars-esque flight combat are so, so great and the skill with which they’ve been implemented make them a timely break from the amusing-if-simple game loop.

Fans of the jetpack areas from Ratchet & Clank: Into the Nexus will be pleased to know that they’re back, but are sadly a bit underused for my liking. Returning fans will also note that most of the planets in the game use more or less the same layouts as they did in 2002, but the jetpack areas are entirely new and so much fun. If only there had been more of it.

That said, not every tweak of their gameplay mechanics is a success — Clank is small enough to squeeze into places Ratchet can’t fit but his levels are still a bit of a chore to get through. He can really only punch which means his combat is severely limited and he gets a couple of run-towards-the-camera chase sequences that recall the days of Crash Bandicoot on the PSX. Some of the puzzles he has to solve are reasonably clever and might take you a minute but there’s an element of backtracking involved that takes away from them as well.

I don’t know that I’d  go so far as to call Ratchet & Clank a rebirth of the action platformer era so well served by the late 90’s and early 2000’s, but in a world of endless first-person shooters,  damn it felt good to have the genre back for a moment. Its scope is smaller than its PS2-era cousins but what it lacks in scale it more than makes up for in polish. Ratchet & Clank has enough on its mind to make returning fans happy but — and perhaps more importantly — it should bring a lot of new fans into the fold as well.

Reviewed on PlayStation 4. Original score was 9.0 / 10 on our original grading system. This has been updated to 4 1/2 stars for the purposes of this article.