Upon seeing PGA Tour 2K21’s reveal, I immediately thought back to all the great memories I had playing golfing games; a sport which I admittedly don’t care that much for. Be it Microsoft Golf, Tiger Woods’ PGA Tour, or even Outlaw Golf, (I bet you forgot that existed) there was something so satisfying about measuring up a monstrous drive, and seeing it land exactly where you intended. Rinse and repeat. However, when I found out that PGA Tour 2K21 was rebranded from The Golf Club, a series that prided itself on realism and authenticity more than actual gameplay; I was admittedly worried. Thankfully, PGA Tour 2K21 reminded me of all the great golfing games of yesteryear, providing an experience that was realistic and authentic, all while feeling accessible enough for a casual fan like myself. It might not break new ground, but it’s ‘putter’ to be safe than sorry.

After creating your golfer, the first thing you’ll notice about PGA Tour 2K21 is how accessible it is in terms of its gameplay options. I chose to play on the Pro-Am difficulty setting, which one would liken to a traditional medium difficulty setting, which went easy on me in terms of swing timing and ball control; but gave me just enough freedom to make me feel like I was putting in all the work. PGA Tour 2K21 plays like many of the golfing forefathers that have come before; aim with one analogue stick, and swing with the other. The swinging motion requires the user to pull back to dictate power, and forward to dictate timing and direction. It does take a little getting used to, as your swing could hook or slice for a number of different reasons. The power bar on the bottom of the screen shows a sweet spot for a clean shot. Any softer and the ball will drop too soon and any harder, you’ll find yourself trading those slick golfing shoes for some serious hiking boots. Pair that with your forward swing, in which you must swing straight and on time. Swing the stick forward slightly to the left or right, and the shot will follow accordingly. Flicking the stick forward is also a matter of timing. Swing the stick forward too slow, and your shot will lack extra roll you needed to get yourself out of the rough. It all sounds incredibly complicated, but it’s a learning curve worth taking. And in time, you’ll realise it was all ‘fore’ the best. 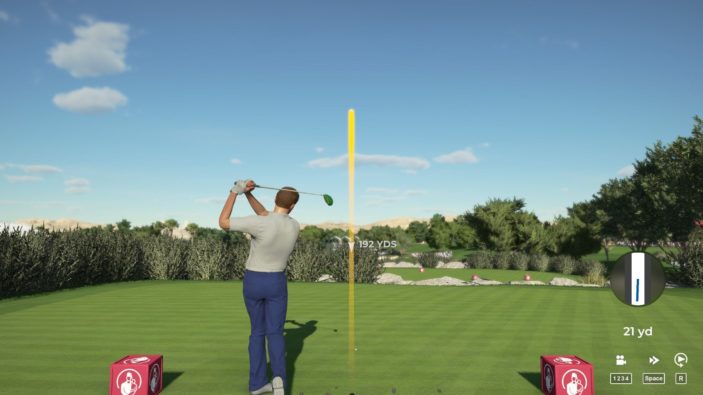 Just when you thought you’d mastered your sweet golfing skills, PGA Tour 2K21 points out that sometimes, a regular shot just isn’t enough. Enter your True Shot. This mechanic basically doubles as a ‘finesse mode’ of sorts. Every shot can be adjusted with painstaking detail, be it forward or back spin, even a draw or a fade. Holding the left shoulder button allows you to alter the path and spin of the ball with each analogue stick, with surprising results. I bring this up after the fact simply because PGA Tour 2K21 does an amazing job at letting you get by with just the basics, should you play on a lower difficulty, but plays on your confidence, with promising results. After a few holes, I found myself utilising this mechanic frequently, adjusting my path and swing for that extra advantage. But if you feel you’re not getting any results, PGA Tour 2K21 never forces this down your throat, allowing you to dominate in any way you see fit; after all, you’re ‘tee-riffic’ just the way you are!

May the Course be With You

Given the gameplay is so satisfying, you must be wondering how one can put their newly found skills to the test. You’ll find all your traditional modes here, including a quick play and career mode, both of which you’ll be spending most of your time playing. Quick play allows you and some friends to play across 15 official course across North America, including the beautiful East Lake Golf Club and Summerlin courses. Each course looks gorgeous, complete with stunning vistas and impressive draw distances that highlight the landscape and surroundings as much as they do the courses themselves. However, players will find themselves sinking most of their time into the  career mode, as you put your newly created golfer to the ultimate test, taking on 12 offical golfers including the likes of world number 2 and cover athlete Justin Thomas, amongst a sea of randomly generated players. It would have been nice to see some more golfers thrown into the mix, but I feel as though casual fans will hardly notice who’s real and who’s created purely for the sake of variety. It’s still annoying though, that these golfers are not playable in any mode. While the career mode sees you working your way through the ranks of the FedEx Cup, it’s pretty bare bones. No cinematic cutscenes, no award presentations or voice acting of any kind. It’s just golf and menus. Some might like it that way, but I would have at least appreciated the effort, given every other sports game does this nowadays. 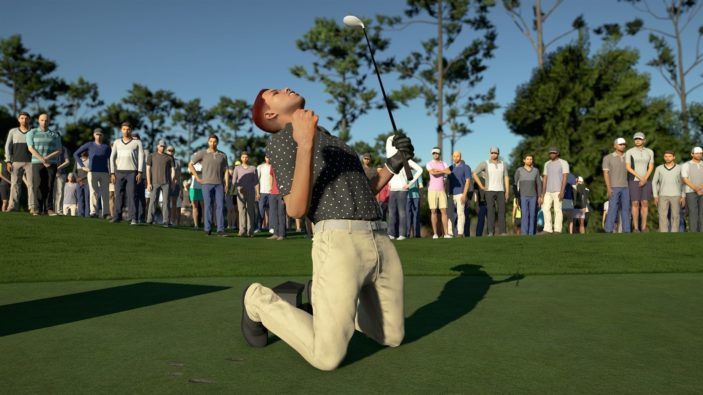 I find it baffling however, that the career mode introduces so many mechanics and systems that just don’t matter. Playing through each course rewards you with a healthy amount of currency and cosmetics, from well known brands such as Adidas and Callaway, but levelling up literally does nothing for your character. You would think that much like fellow franchise NBA 2K, progression could be reflected in player upgrades and abilities. But nope, your level in PGA Your 2k21 is simply a number. It’s nice to see that progression relies on you basically getting better at the game, but it still feels a little cheap. PGA Tour 2K21 also introduces a rival system. This sounds exciting at first but, unlike innovative rival systems seen in the Middle Earth series, you’re simply given a rival who has been performing on your level, until you can play better than them on a consistent level, until you’ve just moved onto a new rival. It’s a shame these mechanics fade into the background, as they could have given this young franchise such a distinct flavour going forward.

It’s not to say that PGA Tour 2K21 doesn’t have much going for it. Commentary by Luke Elvy and Rich Beem makes for a smooth and authentic experience, while larger additions like online societies seek to allow players to create their own leagues and tournaments online for others to play in. While I couldn’t check much of this out prior to launch, I can see friends and fans alike flocking to this mode when the career has run its course. But for the time being, I’m left wondering how a game could be so interesting and strong in some aspects, but so incredibly basic in others. Thankfully, micro transactions play a minimal role, providing solely cosmetic purchases for those who wish to drive some cash into their experience. But on the other hand, it makes me realise that there simply isn’t much that this game allows you to drive cash into in the first place. 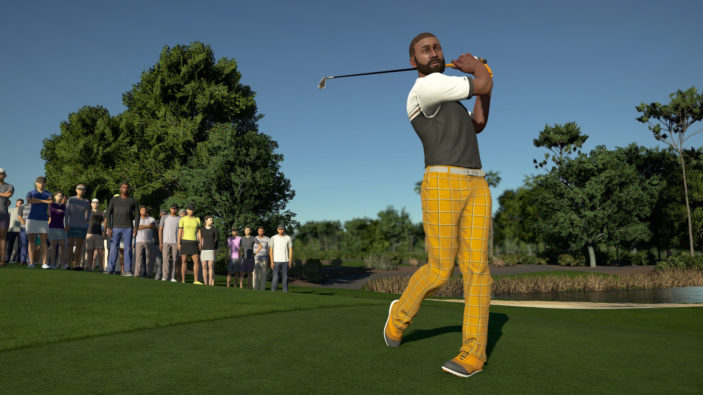 PGA Tour 2K21 is a strong golfing game, but it’s also the sum of its parts. On one hand, you have some incredibly engaging, satisfying and outright addictive gameplay mechanics and deep accessibility options while giving players little variety to utilise them in. The career mode serves its purpose, but lacks individuality, opting out when it comes to its progression and rivalry systems. There’s a good game in here; it just might not be obvious to those looking for a deeper, more nuanced experience. But for us casual fans, I say swing away; and thanks for putting up with my golf puns.