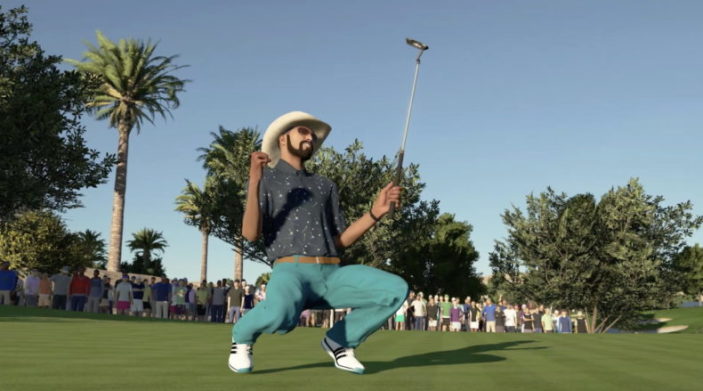 After proving their bona fides with The Golf Club series, developer HB Studios has gone all in. PGA Tour 2K21 aims to return the humble golf sim to the glory days of Tiger Woods PGA Tour 14, with real-life courses and real-life golfers in the mix. Unline any of these real-life golfers, I am not very good at golf, digital or otherwise.

That’s why I had to create a new identity. I needed a golf-sona, a term I just wrote down and now deeply regret. This new lens through which to view the green would surely help me better understand the physical contortions required to complete even the most basic of putts.

A new threat from beyond the divine gate

When Thrang’mak’har, the maelstrom, the ruiner of worlds tore free of the Astral Sea and descended upon our world, he did so with a fairly simple plan — leverage ancient murder techniques and bring about our ruin. But just as he was about to begin his dark work, he was distracted by a game of golf. It didn’t make any sense. A stick, used to strike and fling a small ball down a manicured lawn, whereupon it is tipped into a small hole, the process of which frequently results in true anguish.

Filled as he was with the knowledge of aeons, he had stumbled upon a unique mystery. What was this game? In order to understand golf, he had to play golf. That meant he needed to look the part. A brief internet search for the term “golf man” brought him to Mario Golf: Toadstool Tour for the Nintendo Gamecube. This was a game in which the tall, villainous Waluigi worked with his brother Wario to ruin the Mushroom Kingdom’s biggest golf tournament.

Here, thought Thrang, here is a creature built for crushing it at golf. Just smashing that egg down the runway or whatever. To become this lanky, mustachioed man is to become golf itself.

Thus, meet Clint Golfboy, a product of character creation so deeply ghoulish that I had to craft an elaborate eldritch backstory to explain it. 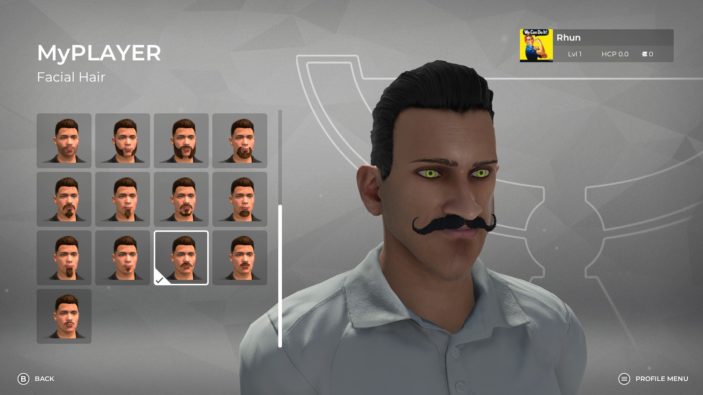 Do It Yourself Demonology

The character creator is one of my favourite things about PGA Tour 2K21 so far. While its default models provide an array of perfect nobodies, the kind of utterly Default NPC human beings that take up the game, it is happy for you to contort your Golfsona into any number of awful shapes. And so, I came up with this hook-nosed old-timey bank robber lookin’ unit. My housemate later informed me that he bears a resemblance to Rooster Teeth’s Jon Risinger. This is a regrettable coincidence. My apologies to Jon Risinger, who seems like a nice man and does not in any way resemble Waluigi.

Clint Golfboy’s career got off to a rocky start. Rather than let knowing nothing about golf stop him, Clint instead entered the PGA Tour. He began, as most hopefuls do, in the Q-School Cup. He ranked somewhere in the mid-hundreds on his first attempt. A minor setback. One year later, Clint returned and, through sheer luck more than any increase in skill, rose to 13th place.

He continued his winning streak on the Korn Ferry Tour, sinking five birdies and securing a dominant second place. Having looked at the evidence and concluding he could be nothing other than a supreme lord of the links as well as the stars, Clint immediately crashed out of the Sand Dune Classic at a brutal +5 above par. Despite the dismal result, he was awarded a cabbie hat as a consolation prize. Clint jammed it eagerly on his head, incorrectly assuming the secret to becoming a golf primarch was to wear as many golf clothes as possible.

The picture that emerged of Clint as he made his way through the tournament was of a player that swung without much thought or care. Unable to read the slope of the green, Clint gained a reputation for being the Michael Jordan missing a putt at a distance of fewer than six feet. His outbursts were often accompanied by an unintelligible howl, and the gnashing of infinite teeth.

Trying to play golf wasn’t working, Clint realised, because he didn’t understand the intricacies of the pocket dimensions upon which it was played. He would need to build a course of his own, a green entirely of his own infernal design.

This is where I started messing around with the course creator. To start with, the game helps you generate a course using individual sliders. So first things first: time to crank all the sliders to 100 and see what happens. Ok, it’s covered in water hazards and bunkers but the fairways are all very wide so we should be fine. Stage 2 is moving into a fly-around editor where you can alter most aspects of the course through floating menus.

What I was left with was a course that would infuriate even the most veteran putt-putt golfer. It was full of hills and valleys that caused the ball to strike and roll in unpredictable directions, enough that it was hard to know exactly how a given shot would land. I also put a gale-force southerly wind on deck for maximum frustration. It’s nice to know you can reach these sorts of extremes in the editor, because it means there’s room for nuance. In the hands of someone with a far gentler touch, there’s little doubt you could create world-class courses with this editor.

PGA Tour 2K21 already feels like HB Studios most confident game yet. It’s not the prettiest sports sim in the world, but it doesn’t have to be. Unlike its stablemate, NBA 2K21, it has far less to prove to its audience. It is enough for it to be “merely” a world-class simulation — it doesn’t also need to be the graphical smokeshow. It’s a surprise to see a high-caliber sports title like this being developed in Unity of all engines, but it seems the team is extremely familiar with it.

For golf fans long left out in the cold after the demise of Tiger the great and powerful, PGA 2K21 is ready to bring you home to the tee. I imagine there’s a few cantankerous dads cooped up here in Melbourne who will be frothing to get their hands on this one.