From the moment we played the Outriders demo, our impression was of a functional and addictive looter shooter. Strong shooting and interesting powers overshadowed the demo’s repetitive mission structures and unrewarding grind. These are, of course, issues that affect the best in the genre. And, as a complete package, Outriders does indeed reflect the best of the genre. Its many gambles pay off, and result in one of the most rewarding and engaging looter-shooters ever made. While Outriders stays true to the formula, it maintains a firm grip on pacing and structure. It emphasises cinematic quality and narrative weight where it can. Server issues and sub-par performance on last-gen platforms aside, Outriders has emerged out of nowhere as a serious genre competitor.

Outriders is set in the distant future. Earth has become an inhospitable wasteland. The human remnant venture into the far reaches of space in search of a new home. It’s Earth-like planet Enoch that eventually gets the nod, and the travellers make landfall. After an 83-year journey, it seems as though humans can begin to build a new world. Soon after, a massive electrical storm called The Anomaly ravages the planet, striking your character in the process. Saving you requires putting you into cryogenic sleep.

A further 30 years pass before you are re-awakened. In that time, your fellow pilgrims have become locked in a bloody, tribal war for control of Enoch. Any hope of saving humanity has been utterly shredded. Further, The Anomaly appears to have altered your genetic makeup. Your character is imbued with power beyond the scope of mortal men and must figure out what that means. So that’s fun.

The narrative itself is well-paced and intriguing enough, all while understanding its place within the overall package. Significant world-building aside, it’s the torn relationships your character must resolve that give the story some shine. People have changed, and so has the planet. It puts you on the back foot, using that strain as motivation to track down allies, and discover Enoch’s secrets. You quickly discover that you are not the only altered being on Enoch. As you battle and befriend fellow altereds, a wrinkle emerges. A greater emphasis on the impact these super-powered few have on the people of Enoch is needed. There’s a narrative weight there and Outriders isn’t quite game enough to explore it. As it is, alterds are typically helicoptered in as evenly-matched mini-bosses. Of them all, there is only one true ‘altered’ antagonist.

The narrative briskly moves players from biome to biome but, curiously, never presents a landscape you couldn’t imagine existing on Earth. Sure, the Outriders journeyed to Enoch because it is an Earth-like world, but surely there are some differences. Thankfully, enemy variety doesn’t face the same issue. Enoch is home a number of native creepy crawlies, but that could have been expanded with more adventurous world design. The decision to play it safe ultimately feels like a missed opportunity. 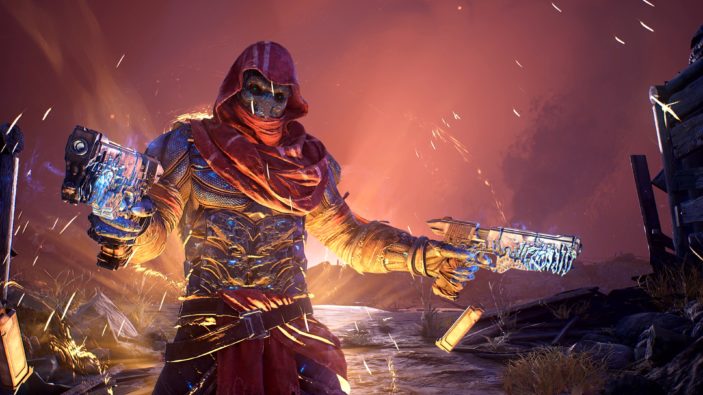 Where Outriders excels is in its ideas for combat. As third-person cover shooters go, it’s incredibly solid. Shooting feels consistently responsive and punchy, as the game’s primary verb should. Cover mechanics are solid; dashing between points of cover is direct and precise, even if switching between cover causes you to forget how to shoot. Your character can vault over nearby pieces of cover and areas of interest, but overall, traversal felt somewhat limited.

This is more of a nitpick than anything else, as the environment rarely present an opportunity to explore off the beaten path. Run here, cover there, vault now, repeat. While I think open world games deserve as many traversal mechanics as possible, this design choice doesn’t necessarily ruin things for me either. Weapon variety keeps things feeling fresh across the board, from assault rifles to snipers and shotguns, I found myself constantly picking up new weapons to test and swap around based on certain encounters.

Being a looter shooter, Outriders‘ loot system makes the combat a pleasure to grind through. At first I found it a little too generous, but the progression and weapon systems do a great job at keeping you engaged and feeling powerful, particularly during the earlier portions of the narrative, in which weapons drop consistently and freely. The motivation to swap and try new weapons does admittedly drop off towards the endgame, but at this point in time, you would have definitely developed a preference and rhythm, considering you’ve already tried weapons from each class. 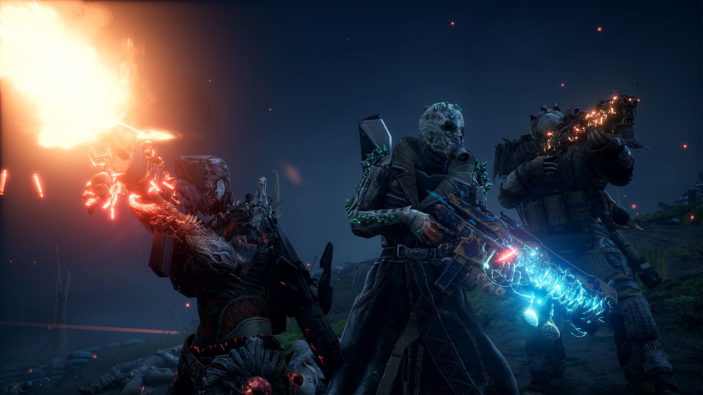 Weapons function and feel different, given the sheer amount. Most weapons fit into a particular class, but are accompanied by particular perks, be it based on your powers, or based solely on weapon statistics. Some weapons give you added damage boosts when used in conjunction with your abilities, while some weapons such as rifles increase the likelihood of a critical hit, should your shot land accurately. But it’s this fusion of abilities and gunplay that makes combat feel as satisfying as it does. Given the amount of enemies Outriders can throw at you at one time, you’ll find it incredibly difficult to deal with encounters without the help of your powers. After all, lead can only take you so far on Enoch. After being affected by The Anomaly, you’ll choose from one of four class abilities. Each ability varies wildly in terms of functionality.

The Technomancer class allows the user to create new forms of technology for use in combat, the Devastator class allows users to shift and teleport around and within the environment to gain the upper hand, while the Pyromancer and Trickster classes allow players to utilise fire abilities and deceptive magic tricks respectively. For the sake of this review, I went through and tested each class accordingly, but had the best time using both the Pyromancer and Devastator classes. The Pyromancer class ironically yielded the most devastating results, as I doused my enemies in fire, causing them to explode, damaging everyone around them in the process.

However, the Devastator class allowed me to teleport right behind my enemies, and smash them to pieces. Once you begin upgrading your skills, your path becomes a lot clearer based on what you prefer using and how you wish to use it. While you’ll unlock new abilities throughout the campaign, you can only take three at a time. While none are completely necessary for success, I found that specific abilities aided my itchy trigger finger a little more than others. 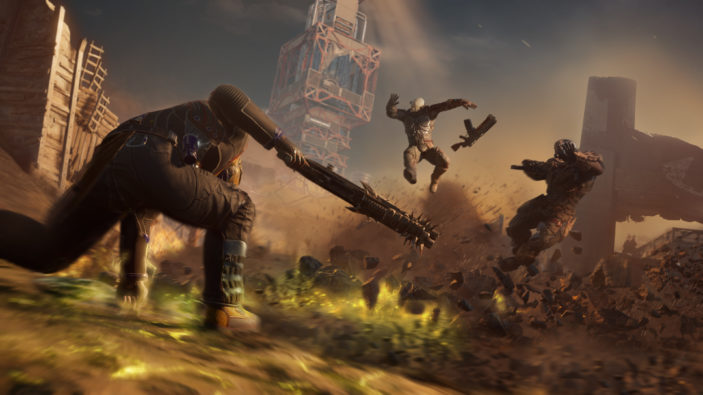 The Good, The Bad… The Servers

For all that Outriders does well, it’s unfortunately not perfect. While I got the chance to play Outriders on PS4 and PS5, next-gen users will be glad to know that both performance and graphical fidelity are solid and crisp. I rarely noticed a hitch in frame rates, and texture pop-ins were next to non-existent. The game isn’t drop-dead gorgeous, but when it runs this well, I’ll be the last to complain. Last-gen is a little more complicated. The frame rate rarely hitches, the only noticeable drops appearing in busier combat segments. Unfortunately, texture pop-ins are much more prominent here; even affecting your character model on the menu screen. It’s far from broken, but I would be lying if I said it wasn’t a significant downgrade in performance.

Server issues, however, have plagued all versions. Earlier play sessions suffered a larger amount of issues, which likely means there’s a quick fix. Server disconnections kick you out to the main menu in an instant. It’s frustrating. For some, this will be enough to keep them from coming back. Once again, it’s not necessarily at Cyberpunk 2077 levels of ‘crashing’ but it’s definitely worth mentioning.

Outriders also allows cooperative play with friends, which is a real blast, particularly when everyone is using a different class. Players can even jump into specific points in the story, as not to spoil the narrative from those who have not reached a certain level or chapter. Given Outriders allows you to create up to six characters, this is where you’ll find most of the motivation to experiment and create new Outriders and choose new classes. Of course, given current server issues, expect interruptions.

Regardless of how you want to spin it, Outriders is an incredibly competent looter-shooter. There’s little reason to draw you in based on its various existing inspirations and structure, as it mostly mimics and retreads what the genre has offered up before; but it also does little to push you away. Nothing in Outriders is particular game-changing or genre-refining, but it doesn’t need to be. I’m not suggesting tempered expectations, but if you give Outriders a chance, looking beyond various server issues and buggy last-gen performance, there’s a lot to love. The story is well-paced and cinematic. Combat is balanced and addictive. The four classes offer up hilariously satisfying methods of destruction and domination. Somewhere down the line, you may feel as though you’ve played Outriders before, and I don’t blame you. But if it ain’t broke, don’t go fixing it.

Review conducted on PlayStation 4 and Playstation 5 with a retail code provided by the publisher.