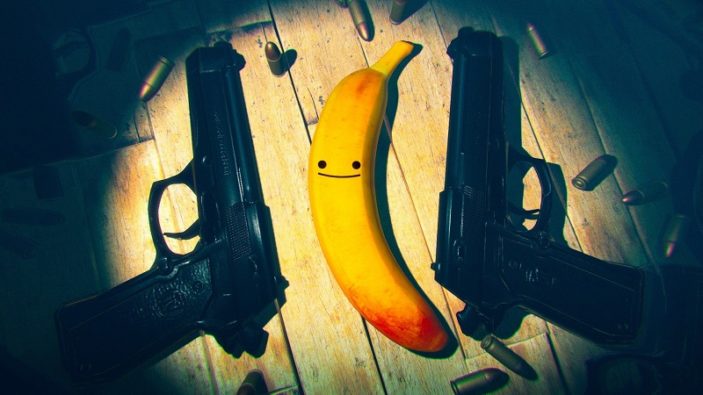 After ridiculous amounts of hype on Switch and PC, wickedly over-the-top side-scrolling shooter My Friend Pedro has parkoured its way to the PS4. With it, the title has brought all the juicy adrenaline, fist-pumping acrobats, and stylish gunfights with it. Not bad for a game where you’re killing people because a weird floating banana told you too.

You’ve kicked a saucepan into the air and shot at it, watching with glee as the bullets ricochet and kill all the bad guys in the room above. That’s you. You did that. And the sense of accomplishment and smug affirmation of cunning is real. It reminds you of that one time you pulled off the impossible in Tony Hawk’s Pro Skater and spent hours watching it on repeat, brushing your shoulders like a boss. Except replace a Slamma Jamma with John Wick-esque moves, and a skateboard with bullets that reach places you initially thought couldn’t be reached.

Though it’s a 2D platform shooter, My Friend Pedro is as much a strategy game as anything else. But you’ve got to think fast, as the gameplay moves like a bat out of hell. Although, even with the brisk pace and pressure, the overall game is disappointingly simple, and bitterly short. 7-8 hours of straight gameplay should get you to the end with time to spare, atoned for only by decent replay value.

Completionists will get a kick out of working their way to the top of leaderboards and getting the highest letter-grading for each level. But beyond that, there’s not much in the way of payoff for effort. The real strength is experiencing the rush for the first time, and once its over you’ll probably find yourself leaving it with plans to come back years later once you’ve forgotten about all the awesome tricks and gun fights that define this shooting banana’s violent warpath. 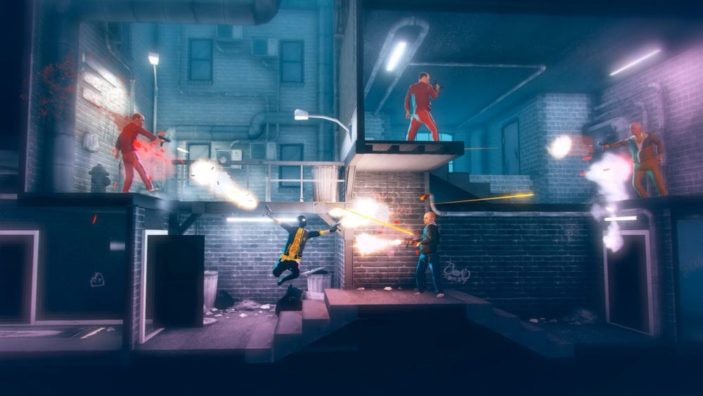 Developers Deadtoast have smartly gone with a slow-motion style not dissimilar to Max Payne, nodding to the game’s major draw by letting you watch all the best parts in this muscular, overly dramatic pace that is even stronger juxtaposed against the game’s perpetual motion. It’s hard not to feel like a kid transfixed by the first big gaming moment of their life. It’s hard to recreate that feeling for adults, which is why despite it’s brevity, My Friend Pedro deserves all your attention. Especially given the whole lockdown thing.

The only real change for the PS4 version is what’s called “Code Yellow” content. It’s largely useful for those who want to speedrun through this thing, with an in-game timer and other small mods geared towards completionists. Other than that, there’s not much to tempt people who’ve already played Pedro on Switch of PS4. But if, like me, you made the mistake of overlooking this title the first time around, this release is one of the best things you can pick up right now.

For another perspective, check out David Smith’s thoughts on the Switch version here.

Highlights: The “holy shit” moments hit, and they hit hard; mesmerising art style makes those big moments look even better in slow-motion.
Lowlights: short and easy if all you’re looking for is a playthrough; nothing storyline; no big extras for anyone unconcerned with speedruns and modifiers.
Developer: Deadtoast Entertainment
Publisher: Devolver Digital
Platforms: Playstation 4 (also available for PC, Xbox One, Nintendo Switch)
Available: Now