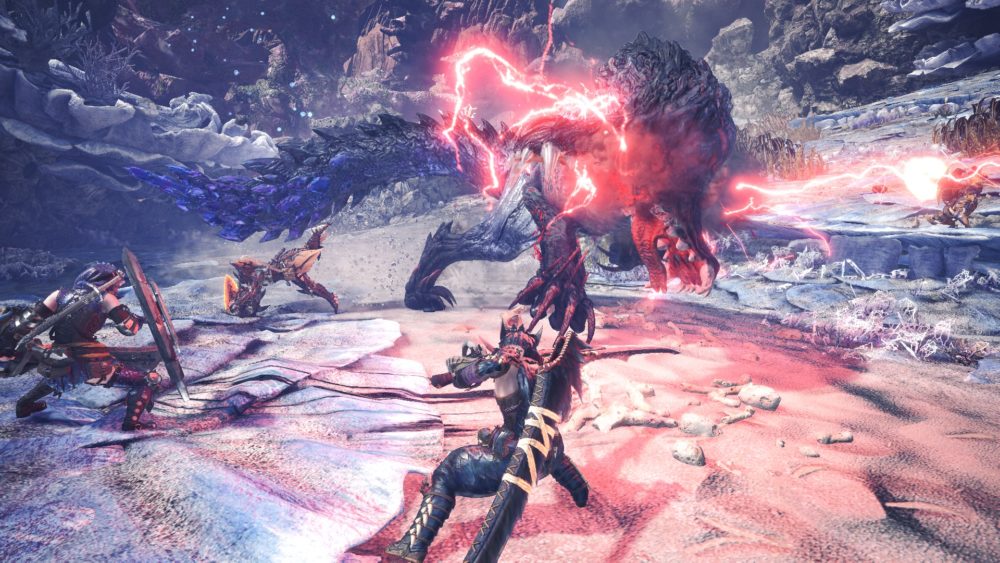 Monster Hunter World: Iceborne feels like it’s got a lot it wants to do. It has the unenviable task of expanding and refining a game that is known for its high level of technical and mechanical complexity. Fans keep coming back to the series because they love that complexity. Thus a lot of fans are wondered “How do you expand a game that revels in complexity without going too far?”

My preview with Monster Hunter World: Iceborne contained quite a bit of content from the start of the expansion, all set after the conclusion of the original game’s campaign. Flying lizard-like monsters called Lagiana are leaving The New World in droves, heading out to sea for destinations unknown. Curious about this sudden desire to migrate (or potentially flee some greater threat), an expedition is charged with following the animals and coming up with answers. After a handful of introductory quests that reiterate certain core mechanics for returning players, it’s off to the frozen wilds with you and your erstwhile Palico.

Arriving in the icy new land proves a shock to the system — your armour, collected in the more summery climes of The New World, does nothing to protect you against the cold and your stamina enters freefall. This is where Iceborne introduces its new layered armour concept. Your regular armour buffs and debuffs still apply, but layered armour goes on over the top. It’s a cosmetic addition, and grants no further stat changes, beyond keeping you warm. Being wrapped in warm clothes means your stamina bar won’t fall as fast, but you’ll still need to bolster it with hot food and drink to keep from becoming too worn out.

This is one of several layers of complexity Iceborne seeks to add to Monster Hunter World‘s already fairly complex combat systems. In a game with a dozen combat styles, each with their own timings and idiosyncrasies, adding even one more mechanic to a fight feels like adding one more plate to a stack that is already beginning to teeter. Another layer is the new Clutch Claw, a wrist-mounted grappling hook that is used to attach your hunter to larger monsters for close-range damage. The Clutch Claw can target almost any area of a larger creature — head, legs, belly, back, or tail — and, if the hook connects, will pull your hunter in, planting their feet on the animal-like they’re in Shadow of the Colossus and allowing you to deal raw damage to any potential weak spots. Your ability to stay attached to the monster is tied directly to your stamina; the moment you run out is the moment you’ll be flung off their back into the snow.

Snow is the expansion’s most significant environmental add. It covers the ground in large drifts that will slow your character down, and wading in up to your chest increases the rate at which your stamina drops from exposure. If a creature manages to disengage from a fight and flees into an adjacent area, you’ll likely have to slog through the snow to catch them, sacrificing valuable stamina and battle-readiness on the way. If you’re thrown off their back and land in it, your stamina won’t recharge as quickly and you’ll need to scull a hot drink.

Much like the base game, you’re free to return to the hub area at any time to train, level up, and crunch your inventory. It was here that players would previously choose their next mission or hunt from a list controlled by their Hunter rank. In Iceborne, not only has the Hunter Rank cap been removed entirely, it’s been replaced with new Master Ranks specifically geared around this post-game content. Players will now find all their optional quests and hunts until a pair of mission screens labelled Low Rank and High Rank. Low Rank is for anything from the base game and High Rank is for end/postgame content contained in Iceborne.

Monster Hunter World: Iceborne feels like an iterative update to a formula that already works. It adds a greater degree of complexity to a game already renowned for it, adding several extra plates to the stack, but does so in ways that don’t cause the stack to topple over. For returning fans, it feels like it’s trying hard to give you everything you’ve asked for and tighten up the core systems. See you in The New World again soon.