Spider-Man: Miles Morales Review: A Web of Style and Substance

Miles’ first appearance was in Ultimate Fallout #4 in August 2011. Created by writer Brian Michael Bendis and artist Sara Pichelli, the character struck an immediate chord with readers. His popularity was a bit of a surprise — readers have always been militantly attached to Peter Parker. It’s common to see them frustrated by Spider yarns that didn’t centre him.

2018’s Spider-Man: Into the Spider-Verse introduced Morales to a wide audience that instantly embraced him and wanted more. Later that year, he would appear in the wildly successful Marvel’s Spider-Man on PlayStation 4. Consequently, it should come as no surprise that Miles now receives his own video game. It’s not the traditional sequel fans may have hoped for. However, Spider-Man: Miles Morales still boasts the quality and authenticity that made Spider-Man an instant classic. Miles’ journey in this game cements his position as a legitimate equal to Parker’s iconic mantle.

Spider-Man: Miles Morales picks up shortly after 2018’s Spider-Man ends, as Peter takes Miles under his wing and shows him the ropes. Following an incredible introductory setpiece, Peter Parker decides to take a short trip overseas, leaving Miles to watch over New York City. Because this isn’t Parker’s game, he isn’t around all that much, but when both Spider-Men share the screen, their chemistry is genuine.

Parker’s departure coincides with technology company Roxxon unveiling a new source of clean energy that threatens the stability of the entire city. Miles must tackle the twin menaces of Roxxon CEO Simon Krieger and underground gang leader The Tinkerer alone. Both villains plan to use this new source of energy for their own nefarious ends.

The main campaign is admittedly short and clocks in at around eight hours. It stacks these eight hours with plenty of twists and turns, engaging characters, and incredible setpiece moments to keep things feeling fresh the whole way through. While the set-pieces could have been distributed more evenly through the middle of the story, I was willing to forgive a bit clutter because Miles makes it worthwhile. He carries the story so effortlessly, shouldering the bulk of its emotional and thematic payload, with help from a few unique supporting characters. Miles’ loveable right-hand man Ganke and his level-headed best friend Phin are standouts, sincere nods to some of Miles’ earlier comics. 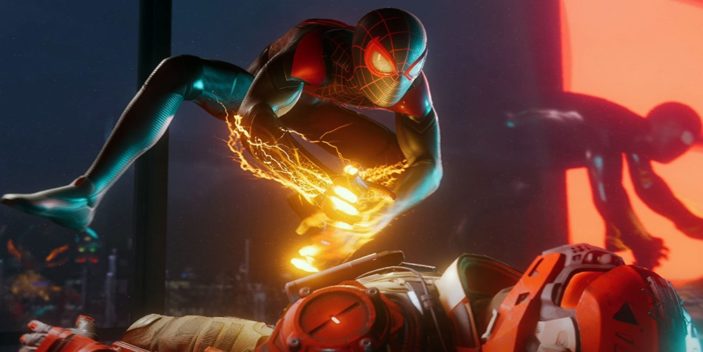 Don’t let the narrative’s shorter length fool you. It in no way detracts from the quality and depth of the overall experience. Spider-Man: Miles Morales still features the same gorgeous and dense New York as the original. The Christmas setting, with its damp streets and snow-covered rooftops, are a perfect showcase for the game’s reworked lighting and textures. Though our review was conducted on PS4, we cannot wait to see how this game runs on PS5 with all of its graphical bells and whistles turned loose.

Cutscenes were disrupted occasionally by frame rate drops, and I did notice a few clipping issues where enemies could get stuck in a nearby car or wall. Beyond these minor niggles, the experience performs as smoothly as it looks. Given the story’s reliance on spectacle, players will be glad to know that the city is as vibrant once the credits have rolled. Miles can take on various side missions, stop various crimes, track down collectibles and engage with the public through the Friendly Neighbourhood Spider-Man app. With a swipe of a touchpad, players can use the app to take on side quests and respond to requests posted by civilians. These activities aren’t necessarily mind-blowing or game-changing, but do provide a sense of real community. Miles truly is their friendly neighbourhood Spider-Man.

The biggest draw of the Spider-Man franchise is its fantastic gameplay elements, and Miles Morales is now slouch. Miles plays differently to Peter Parker, with his own set of  abilities. This changes combat and traversal in ways that feel great, while still keeping them familiar. Miles’ bio-electrical powers and camouflage add a tremendous amount of value to gameplay, and both feel gratifying in practice. Combat feels very similar in principle to 2018’s Spider-Man, but again Miles’ ‘Venom’ powers let you change up your tactics. Miles can attack until his Venom bar is full and unleash havoc, electrifying all the enemies around him. Whether it’s the Venom punch, dash or smash, it expands on combat depth in ways that feel really satisfying.

Camouflage plays a larger role in stealth, but (importantly) never feels overpowered or even necessary. There are new enemy types can identify Miles through his cloak, so it can’t be relied upon for 100% success. While I used this ability scarcely, it does play a role within the narrative and adds to some incredibly tense stealth sequences. Traversal is also as consistently satisfying as it was in 2018, but once again, Miles’ Venom abilities allow him to leap and dash through the air with an added sense of speed. It’s also incredibly charming to see Miles stumble and fumble through the air as he learns to swing. Insomniac’s animators clearly had a lot of fun in their own playground. 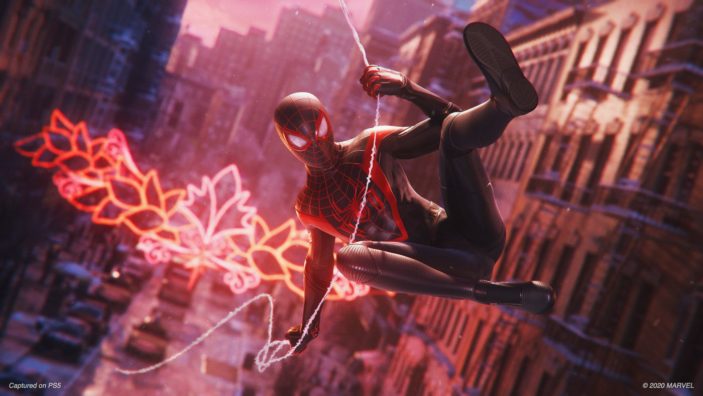 Finally, Spider-Man: Miles Morales has an incredible sense of style. Every part of Miles’ multiethnic background is used to great effect. From an upbeat hip-hop soundtrack, to the inclusion of Miles’ Hispanic roots via authentic, subtitled conversations, it all ties together and feels culturally relevant. It’s never overdone, its a gentle touch. It’s clear that developer Insomniac Games understands Miles Morales and who he is under the mask. I feel like they owe a lot to Spider-Man: Into the Spider-Verse, which brought Miles into the mainstream, but it’s honestly hard to argue with the results.

Marvel’s Spider-Man: Miles Morales isn’t perfect, but it’s nevertheless impressive. It’s not a traditional sequel, but it isn’t trying to be. Where the narrative lacks length, it makes up for it with clever writing, genuine relationships and dense set-pieces. Gameplay is deeper than 2018’s Spider-Man, utilising Miles’ Venom abilities to great effect. Some repetitive side missions and occasional are present, but in no way detract from the overall experience. At the end of the day, this is without a doubt an incredible effort and a promising sign of things to come.