I owe the Mario Party franchise a great deal of credit. It’s responsible for some of the best gaming moments I’ve had on a Nintendo console. While Mario Party 3 will always remain my favourite, it’s safe to say that the franchise faltered in recent years, prompting me to drift away from the iconic mini-games and colourful game boards. Thankfully, Mario Party Superstars packs in an incredibly charming amount of nostalgic goodness. While it’s admittedly nothing new and far from perfect, this latest iteration is a tremendous step in the right direction.

Mario Party Superstars gathers 100 mini-games and 5 boards from the first three Mario Party games. Be it the Yoshi’s Tropical Island board for a beginner’s experience, Peach’s Birthday Cake and Space Land for a straightforward and fast-paced session, or the more complex paths and mechanics of Woody Woods and Horror Land, there’s something for everyone. It’s worth tackling the boards first, simply because they highlight and promote the newer structure and intention of Mario Party Superstars. If 2018’s Mario Party Deluxe was a return to form, count this later entry as a neat and focused follow-up. It’s clear that Nintendo heard their fans and instead opted in for a Mario Party game that holds back on many of the newer mechanics introduced over the years, in favour of something from a simpler time, that older fans like myself, could easily connect with.

Gone is the party car, along with motion controls and character-specific dice and abilities. What follows is a straightforward board game experience where players must track down coins and stars, while competing in the occasional mini-game. It sounds ridiculous, but Mario Party has been anything but in recent memory. Thankfully, Mario Party Superstars feels fresh for several reasons. Given the decent visual overhaul of the entire experience, from the boards to each mini-game, and refined controls, there’s plenty to warrant a revisit. 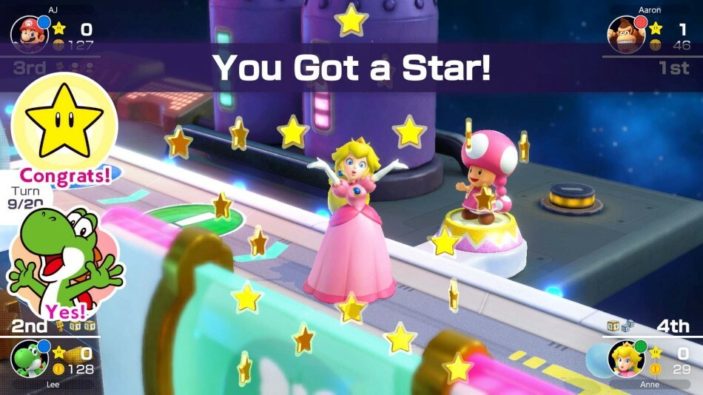 Unfortunately, after a number of games, both alone and with friends, the lack of boards becomes a little jarring. While it’s fair to make the claim that the original three Mario Party games rarely included more than a handful of boards, this still feels like a missed opportunity. Fan favourites like Western Land (Mario Party 2) and Waluigi’s Island (Mario Party 3) could have given a huge boost to the overall package in terms of board variety and as a result, longevity.

But what would a Mario Party game be without some addictive and quirky mini-games to compete in? Not Mario Party Superstars, apth 100 mini-games pulled from every entry in the franchise, it’s honestly hard to complain about a lack of variety on this front.

Everyone loves the Bumper Balls mini-game, where each player must roll around a small arena on a giant ball in a bid to knock each other off the edge. But some underrated picks shine through, such as Reverse-a-Bomb where players must send a Bob-OMB from one side of the screen to the other, while each team tries to keep them as far away from their side as possible. Simplistic controls and a straightforward objective allow any player to stand a chance, even if some of the mini-games feel like they’re either over too early or subject to luck.

I Hear There’s a Party in Town

Mario Party Superstars also prides itself on player approach. Should you wish to play alone, locally with friends or online with anyone, the party is had on your terms. Setting an overall amount of player turns for a shorter or longer game, the ability to add extra stars on a board, mini-game help and a general or specific handicap, ensures that players can compete fairly and with the most friendly experience in mind. 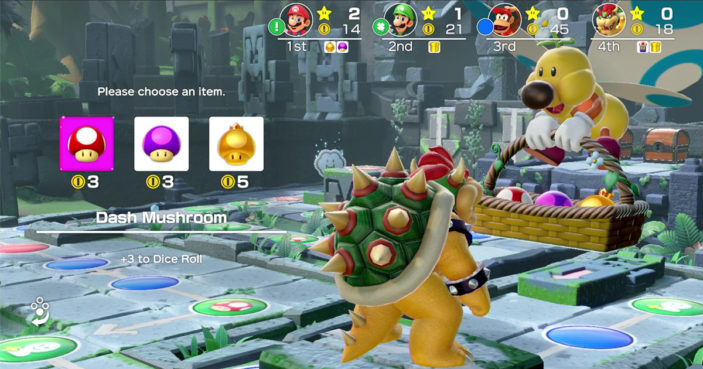 However, I would always recommend playing with friends. The charm of the Mario Party franchise has always been its socially binding structure. Sure, it’s playable entirely in single-player, but as it’s not necessarily deep in terms of gameplay mechanics and an overall sense of progression, those cracks might shine through in time.

You might think Mario Party Superstars is an old, tired recollection of days since gone. Thankfully, this package is anything but. By focusing on earlier entries, it’s clear that Mario Party as a franchise still has a bunch of fun to distribute between you and your friends. Simplistic controls, a variety of mini-games, and colourful visuals make this not only a celebration of Mario Party’s greatest hits but a solid foundation for the future of Mario Party altogether.

While the lack of game boards can wear a little thin for those dumping a considerable amount of time into this year’s entry, the sheer volume of mini-games is sure to keep even the most hardcore fans wrapped in a warm blanket of nostalgia, for as long as the fun lasts.