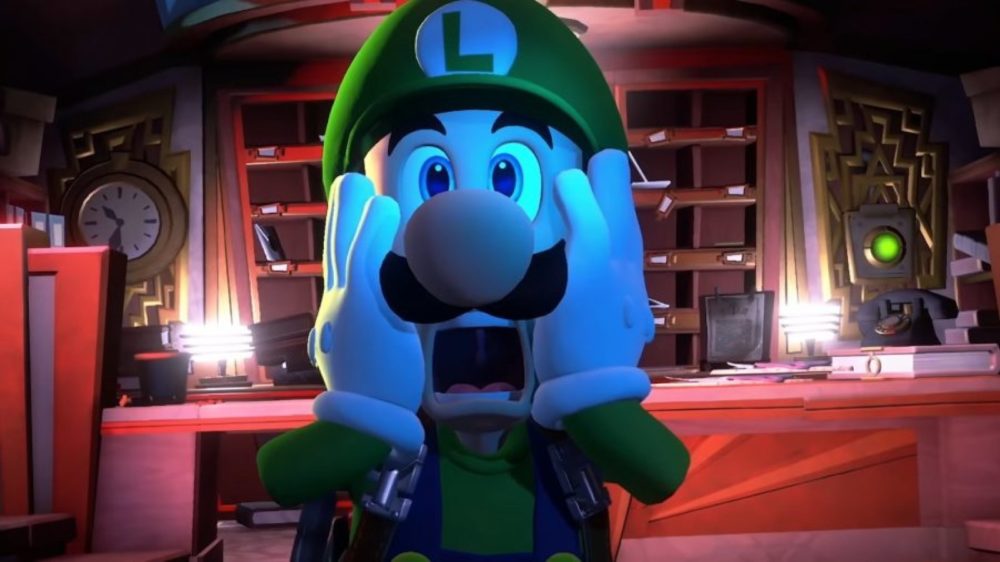 Luigi’s Mansion 3 is exactly the kind of game to get your kids if they love Halloween. Uncomplicated in design and low on overall difficulty, it smoothes over any potential wrinkles with trademark Nintendo charm. It’s spooky in the ways that kids love and is always careful to undercut its low-grade scares with good humour.

The Mario Bros are taking a well-earned break. Mario, Peach and Luigi are going on a holiday. They arrive at an extremely swanky hotel and head up to their very plush rooms for the night. Things get weird right away. Luigi awakens in the middle of the night to discover that the hotel has gotten very spooky indeed — a strange mist pervades every room, and ghosts roam the halls (every one a Focused, Non-Terminal, Repeating Phantasm, or  Class 5 Full-Roaming Vapor).

Mario and Peach are missing, vanished without a trace. Their rooms show signs of a struggle. The ghosts have vandalised the hotel elevator. All of the buttons from the control panel have been stolen, rendering every floor above the lobby inaccessible. An eccentric scientist named Professor E. Gadd becomes Luigi’s only ally. With E. Gadd’s inventions, like the Poltergust G-00 vacuum, Luigi must recover the buttons, climb to the penthouse and rescue his friends.

The hotel itself is one of Luigi’s Mansion 3‘s greatest feats. The first few levels follow a fairly straightforward hotel floor plan (the basement, the lobby, second-floor stores and amenities). As you climb the tower, they quickly morph into ghoulish parodies, rooms that defy space and physics altogether. Sprawling theatres, giant gladiatorial arenas, towering staircases consumed by jungle flora — this hotel has it all. Nintendo has let their imagination run wild on this one, and it makes entering every new floor a pleasant surprise.

Each of the hotel’s 20 floors comprises a single level, and take no longer than 30-40 minutes to clear. Every floor conceals a boss ghost, an especially powerful ghoul who holds the elevator button to the floor above. Each boss introduces new and interesting ways for Luigi to wield his set of six moves. Suck or Blow on the vacuum cleaner lets you push the ghosts around. A chargeable flashlight freezes ghosts in place. A blacklight reveals hidden items, areas and other secrets. Finally, a ground-pound/jump attack helps clear cluttered rooms.

The sixth move in Luigi’s kit is Gooigi. Gooigi is a viscous, green version of our hero and can help solve more complex puzzles. He can also get into areas that Luigi, with his regrettable human flesh body, simply can’t access. Playing solo, you can only control one character at a time, which means swapping between them as you solve each puzzle. Simply hand the second Joy-Con to a friend and they can play as Gooigi in co-operative mode.

Gooigi is impervious to piercing damage, and can squeeze through small gaps and worm is way through pipes and drains. The complication lies in that he is vulnerable to water — even touching it will make him dissolve. The game finds increasingly clever ways to hide or introduce water to its environments to keep Gooigi on his toes.

We ain’t afraid of no ghost

There are also multiplayer modes beyond the campaign with the ScareScraper and ScreamPark modes.  ScreamPark is the main multiplayer component with modes like Ghost Hunt and Cannon Barrage. Each of these modes can accommodate up to eight players. They’re certainly fun for a little while, but none of them held our attention for very long. ScareScraper is essentially a speed-running component, allowing you to re-run sections of the campaign on a steep timer. ScareScraper introduces new items not present in the regular campaign to help you move a bit faster.

Luigi’s Mansion 3 is an example of Nintendo at their best. It’s a little different to the usual Super Mario fare but much of it is still very familiar. It features gorgeous presentation, striking the perfect comedy-horror tone from the jump, and its animations are broad and expressive. For families looking for a haunted house to explore over Halloween, look no further, and don’t worry — Luigi’s got your back.