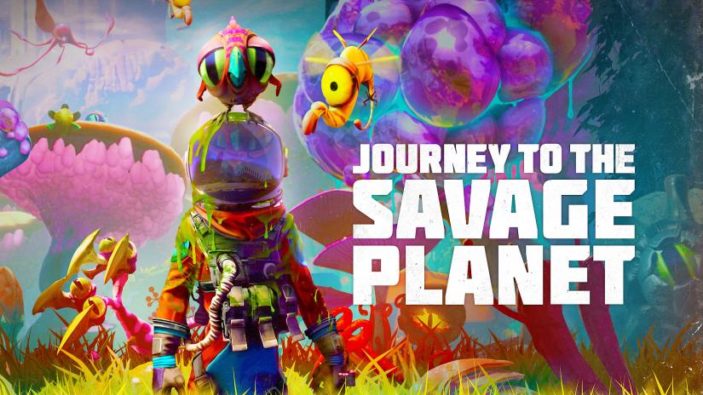 In Journey to the Savage Planet, you are an explorer employed by Kindred Aerospace, the galaxy’s the 4th best interstellar exploration company. Your task is to explore the unknown planet ARY-26 in the hope that it can sustain human life. Theoretically, the job is a milk run. In practice, not that simple.

After an abrupt landing, realisation dawns that this planet is little more than a barren wasteland. Wildlife roams the surface, and great, crumbling structures tower above the desolation. The story is simple, with most of the plot explained to you through hilarious and intentionally campy FMV sequences. Developer Typhoon Studios create a sense of mystery and underlying dread, promoting a narrative of cautious optimism. My biggest narrative gripe is that its pacing is often inconsistent. Many missions progress the story in meaningful ways, while still allowing you to explore and progress at your own pace. Not all of them do though, and the ones that didn’t were a low-grade slog. I don’t mind either section, it’s just that the up-and-down, after such a strong introduction, feels jarring. The story raises so many interesting questions but I’m not sure Typhoon pays them all off.

Visually, Journey to the Savage Planet boasts a strong, consistent art direction. As you may have seen in trailers (and even it’s cover art) ARY-26 is a riot of colour. The quirky, vibrant art bolsters the sense of exploration simply because everything is so lovely to look at. You want to see more of it. Exploration is incentivised with a parade of new experiences and environments. This keeps things fresh, lively and eye-catching. 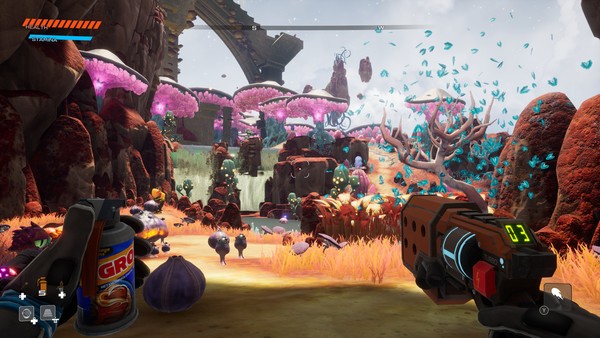 Gameplay is most definitely the meatiest chunk of the experience simply due to the variety on offer. Naturally, in a game based around discovery, traversal and exploration go hand-in-hand. Journey to the Savage Planet understands but wants you doing much more than just exploring. Combat is a large part of the experience, defending yourself against hostile life-forms. You can upgrade your trusty pistol with elements collected from downed enemies and the environment. The upgrade tree features all the usual perks, like larger ammo clips and damage boosts. Suit upgrades provide more health and armour. Traversal skills, the good ol’ double jump and a neat grappling hook are also in the mix. These upgrades add depth through small changes that improve the experience without feeling overpowered.

Research is very important. Part of your mission involves scanning flora and fauna alike, compiling an impressive encyclopedia of life on ARY-26. Reading through each new entry hooked me very early on in the experience. Each skillfully written entry informs a lot of the game’s worldbuilding. However, the more complete your catalogue, the more diminished the sense of discovery becomes. The open-ended nature of the game means you can start filling in your catalogue immediately. If you get a little carried away, as I did, you may get over it very quickly. I wish these discoveries were evenly dispersed throughout the entire experience. 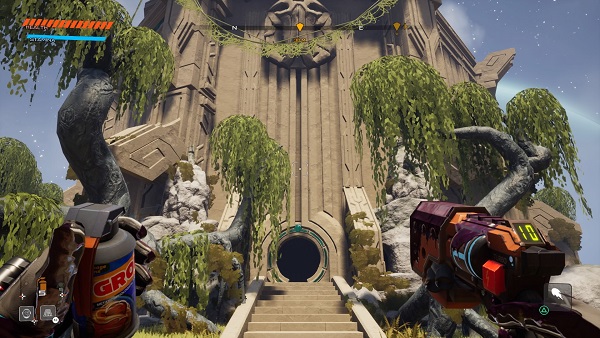 This uneven sense of discovery and repetition hampered the back half of the experience. Journey to the Savage Planet‘s campaign also features cooperative play, but repetition creeps in all the same. Though co-op leads to some hilarious scenarios, it doesn’t lend itself to co-op as well as it could have overall. There are things I wish it had done — cut itself a short to promote a tighter story, better allow players to explore freely. For a game based on freedom, it feels like its constantly pushing you to try a lot of everything.

Much like ARY-26, Journey to the Savage Planet has loads to offer at a surface level. The first few hours are strong and captivating. It has humour, mystery, varied gameplay, and gorgeous visuals to spare. But it overstays its welcome, enjoyment wearing thin after a several hours. I felt like the story had petered out and let me down, but it was the overly long experience that truly left me weary. The game simply plays its hand too early, leaving the play with little reason to return to the table. I do believe it was worth the journey; just probably not a second.

Journey to the Savage Planet is in many ways everything I wanted No Man’s Sky to be. Exploration, combat and humour all combine into a lighthearted, colourful and lively interstellar adventure of discovery and danger. The variety of its content keeps it afloat longer than it might have gotten away with otherwise, but it can’t sustain the experience. Players are ultimately with a lingering sense of repetition and frustration. But make no mistake: Typhoon Studios have most definitely crafted something worth playing, even if it’s a little rough around the edges.