A brand new gameplay trailer for Gotham Knights was shown off overnight, highlighting both Nightwing and Red Hood as they patrol the streets of Gotham. While not related to the Batman Arkham series, the trailer bears many similarities in terms of gameplay, from combat to traversal.

Game Director Geoff Ellenor opened the proceedings, before we were treated to some sweeping shots of Gotham City. We are firstly introduced to Nightwing, as he glides through the skies using a powered glider known as the Flying Trapeze, a reference to his youth as a trapeze artist. Landing on a nearby rooftop, we get our first look at combat as Nightwing engages with members of a local crime gang, known as The Regulators. It’s immediately noticeable just how agile and acrobatic his fighting style is, as he slides about the environment, bouncing from enemy to enemy with ease and fluidity.

As Red Hood enters the fray, we get a brief look at his aerial traversal, as he uses ‘soul energy’ to leap about the sky on mystical platforms. It’s admittedly a little left field, but given Jason Todd’s resurrection storyline seen in 2015’s Under the Hood arc, seems to have been gifted with spiritual abilities. Red Hood then immediately utilises his dual-wield pistols, picking apart enemies at range. It’s worth noting that Red Hood’s rounds are non-lethal and therefore not necessarily overpowered. The last of the larger enemies is then dispatched by both Nightwing and Red Hood as they unite for a combined attack. Soon after, we get our first look at Red Hood on the Batcycle, as he chases down a smuggling van filled with gang members. Upon stopping the van, we get a much better look at Red Hood’s melee abilities, which seem to serve as a buffer to create space for ranged pistol attacks. 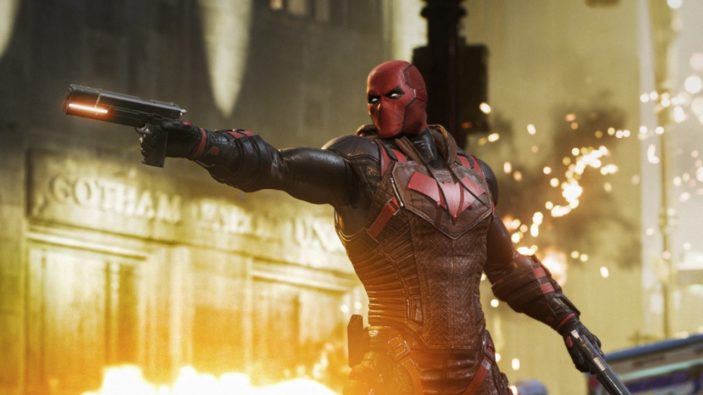 We then cut back to the Belfry, which will serve as the home base for our heroes with the Batcave now gone. Players can explore the Belfry and use the Bat Computer to survey the city and choose missions. A workbench nearby also allows players to upgrade equipment and abilities, of which crafting materials can be gained from completing missions out in the open world. It also appears as though aesthetical customisation will play a large part in the experience as you equip new costumes and don new looks. Players can also find and allocate Mod Chips to outfits, which add buffs to existing abilities and gadgets.

It’s also worth noting that within the Belfry, we get a good look at our characters outside of their costumes; I can’t help but make a comment here on the fact that Red Hood is huge. A small cutscene gives us a glimpse at the emotional turmoil of our protagonists as they deal with the loss of Batman, their father figure and mentor. It would be nice to see just how these characters now function as a unit, given their past grievances with both Batman and each other, which now seem to be on the mend.

This next story mission on display takes place earlier on in the game as the gang discover the existence of the Court of Owls. Nightwing can be seen sneaking into the old Powers Club, a suspected hangout for the villainous group as we get our first look at stealth-based gameplay. Much like the Batman Arkham series, Nightwing can perch on ledges and eavesdrop into nearby conversations, with each hero utilising exclusive takedown and finishing moves. Players now have the ability to choose between ambush and silent takedowns. Silent takedowns makes less noise, but take longer to complete, while ambush takedowns are much faster, yet louder. The difference between the two could prove important in certain situations where multiple nearby enemies could be drawn to your location. Nightwing can also use his Augmented Reality Vision to track nearby clues to help solve puzzles and add context to the environment. We the cut to open combat, as we see Nightwing show off his Elemental Shockwave ability, which can damage armoured enemies, leaving them vulnerable to your attacks. Elemental effects also damage enemies in certain ways, as Nighthawk’s Cryo attack freezes enemies so players can catch their breath. 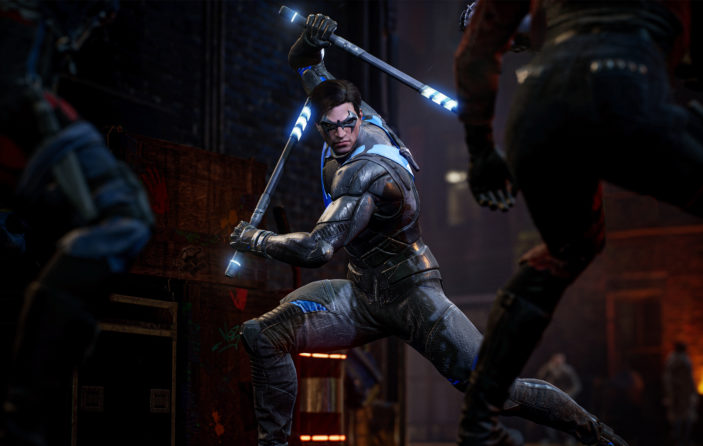 As Nightwing discovers a secret entrance to the Court of Owls hideout, Red Hood enters by taking on a Talon Gladiator, a superhuman assassins impervious to certain attacks. Players must utilise elemental abilities to damage certain enemies, allowing for an added layer of strategy, which shall hopefully alleviate button mashing while bolstering enemy variety. The trailer then ends on a cliff-hanger as Red Hood is captured by the Court of Owls.

Gotham Knights draws a hefty amount of mechanics and structure from the Batman Arkham series, as series which developer WB Games Montréal claims Gotham Knights is not related to. However, it’s clear that the game has taken some promising steps in the right direction, presenting an intriguing story wrapped up in deep, cooperative gameplay mechanics. Check it out for yourself in the trailer below: