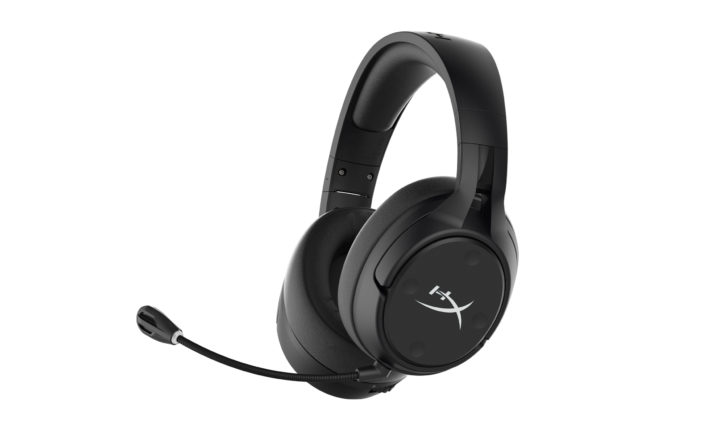 It’s been a minute since I’ve reviewed a Hyper X headset. Over the last few years, HyperX have gone from a PC hardware manufacturer famous for high performance memory and gaming drives, to a real contender in the peripheral space. With the Cloud Flight S, the latest premium tier addition to their lineup, HyperX looks to cement their ever more dominant position in the pack.

The design of the Cloud Flight S represents only a minimal leap from previous generations. It trims a little of the fat, keeping the ear cups much lower profile. Gone from the previous version are the red LED’s behind the Hx logo on the outer cups. The frame is a strong plastic that gives it a sturdy feel while keeping the whole unit lightweight in the hand and on the head.

The headband and earcups are covered in a soft black leatherette. Leatherette is becoming the go-to from many makers who want to give their cans a more luxe finish without overheating the user. True leather is nice but is terrible for heat dissipation. The bet on leatherette seems to paid off — I’ve not noticed the Cloud Flight S as running particularly warm at any time during this review. At the time of writing, we’re coming into the cooler months in Australia and so that may have something to do with it. I wonder if I’d feel the same if I were reviewing them at the other end of the year. While wrapped in the same leather, the headband is very thin. There’s maybe a layer or two of peeled foam inside, enough to soften against the skull. I found it fine, but my hair is pretty thick which acts as a buffer. Depending on how plush you like your headband to be, some users may find it less comfortable than others.

The earcups themselves feature 90-degree rotation so you can more comfortably sling them around your neck when you don’t need them on, and the microphone is both bendy and detachable, allowing a bit of extra freedom.

The overall design is very much in keeping with HyperX’s preference for simplicity over frivolity. It doesn’t have LED’s because its a headset, it doesn’t need them. It’s one of my favourite factors across all of their designs and I’m glad to see them holding it close with this model.

HyperX is rather proud that the headset features “custom tuned 7.1 surround sound” but I found this to be by far its most underwhelming feature. This is virtual 7.1, not the genuine article. As such, it becomes an option to be switched on and off in HyperX’s Ngenuity app rather than the foundation on which the headset is built. Every time I used the 7.1 mode, I found it drained much of the bass tone in favour of crisp, put-your-teeth-on-edge treble. It made games sound worse, as though I was hearing them through a Zoom call, and I quickly dumped it for the standard stereo arrangement.

The official HyperX website rather confidently states that the Cloud Flight S can pull up to 30 hours of battery life out of a single charge. I have not found that to be at all true. I’ve found that I can get around ten to twelve hours out of it before it brings up a low battery alert. This means I’m recharging it once every few days. Thankfully, the recharge time isn’t all that long and the Cloud Flight S can still be used as a wired headset while charging. Also of note, the headset has been Qi certified so you can plonk it on a wireless charger (sold separately) if you have one. I found that add a little bewildering. I mean, it’s a nice feature and it looks impressive among the dot points on the box, but I don’t know how many people are going to actually take advantage of it.

The Cloud Flight S uses a fairly standard USB dongle for wireless functionality and, while HyperX states users can expect a connection distance of up to 20 metres, I would manage your expectations a little. The house I live in has particularly thick walls. If I walk out of my room and into the hallway, the connection is lost. So bear that in mind — 20 metres, yeah, but only if your walls are made of paper. Even my old RIG 800’s, which have always had the best distance of any headset I’ve ever used, can still make it down the hall here. It would be great to see HyperX improve their game in this regard.

One feature I really do like is the inclusion of four customisable buttons on the outside of the left-hand earcup. Each one can be bound to a particular audio function, whether you want multimedia controls, an instant mute or the ability to toggle the microphone’s sidetone on or off (and I’d like to thank HyperX for including mic sidetone at all. Not enough headset makers do this anymore). It’s solid stuff. I know PC players love a macro and this kind of thing is playing to the crowd but I appreciate the extra effort.

For sound hounds concerned after my dunking on the 7.1, I have good news: the standard stereo arrangement is a great deal more preferable. It boasts one of the nicer audio balances I’ve heard in a gaming headset in some time with deep bass hums that don’t obliterate other tones, and a high range that rides the line of being just crisp enough. Spatial audio isn’t a problem either: if you have Dolby Atmos available on your PC or Xbox One, you’ll be well served by the Cloud Flight S’s soundstage. It’s fine work and ticks a lot of personal boxes. It also throws the disappointing 7.1 into greater disrepute.

Tech specs for nerds? Yeah, we got those:

What all of this translates to for the layperson is a set of headphones that sound great without you having to do a damned thing. The volume does go a little loud for my liking but beyond that, this is an extremely well-balanced set of cans. Impressive as hell.

It’s nice to review a headset that has manners. The HyperX Cloud Flight S knows that bang for buck is expected of a headset in this class and it works to give the user exactly that. While fans of other brands may baulk at the initial lack of features, I think the Cloud Flight S will win them over. It understands that there are only two things any headset has to get right — it needs to feel good and it needs to sound good. The Cloud Flight S nails both. Recommended.

Review conducted using a retail unit provided by the manufacturer.