My first experience with Hunt: Showdown sent shivers up my spine. Navigating a Louisiana bayou in search of a giant spider, the trail led me to an abandoned factory. Upon entering, it was clear; I had found my target. Cobwebs covered the walls and walkways, crunching underfoot as I scoured every inch of the place. Nothing. Water dripped somewhere in the old building, the sound hanging in the silence as thick as the dust in the air. And then, without warning, the monster came hurtling out of the dark.

Hunt: Showdown has been available on the Xbox One and Windows PC for some time, and has now finally made its way to the PlayStation 4. An online first-person shooter based around hunting supernatural creatures, it succeeds thanks to its compelling gameplay and clever mission structure. While it lacks wider variety, you’ll spend every moment locked in a nervewracking battle of wits that requires speed and courage to survive.

Hunt: Showdown casts players as monster hunters, taking on contracts in 19th Century Louisiana. A mysterious virus has infected the city, turning people into large beasts and supernatural entities. The story takes a similar tack to Destiny, burying its lore in logs contained in an in-game encyclopedia. Despite this, the set up strong enough to succeed based solely on its originality. We’ve certainly seen plots like this before, but this particular setting and approach gets the hook in early, leaving you wanting more.

The game opens with a solo tutorial mission, giving you a feel for the game’s flow and structure. Beyond this, the game consists entirely of online multiplayer. The tutorial illustrates the game’s main thrust, a mission akin to the Bounty Hunt mode. In Bounty Hunt, players must navigate a large map to find various clues, each one slowly revealing the target’s location. You have to move quickly, with each player using their dark sight ability — a supernatural secondary vision that highlights points of interest — to track down three small shrines. The shrines contain clues. Reaching the third shrine reveals the location of your target. The question of how to tackle the monster is up to the other hunters in your session — work together or take out the competition to get ahead. I found that the lead-up to each target was tense, but unfortunately nowhere near as exciting as the final showdown.

Bump in the night

Unlike the mission structure, Hunt‘s three monstrous targets are quite varied. The Assassin relies on their super-fast movements as you test your rifle skills, while The Butcher pads himself in ridiculous amounts of armour. The worst of all however, is The Spider. Being an arachnophobic myself, I can’t stress enough, that those who fear spiders will be truly tested as it lunges at you, attacking you with webs and poison. Each encounter is incredibly intense as players must banish the target while also fending off any incoming hunters now aware of your location. Once the monster is felled, one of the game’s most stressful and fun challenges begins: evade rival hunters as you make a mad dash to one of the extraction points around the map and claim your reward. 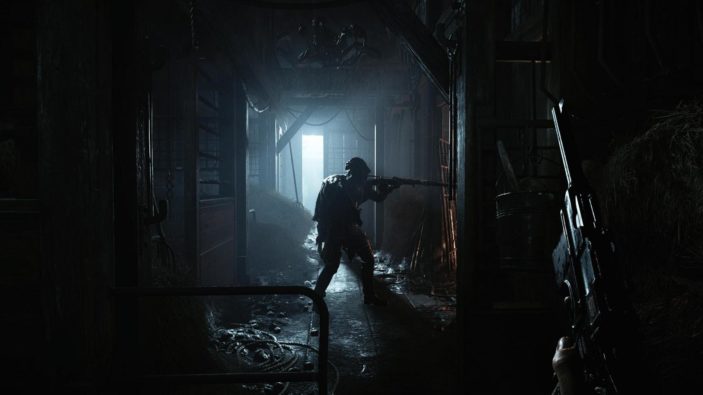 The Quick Play mode is a similar beast, but only changes the formula slightly. You’re given a random character with random gear, and it’s off to the races. It’s ideal for those who want to jump in and go. It also stands in contrast to Bounty Hunt where you create a character and build that is entirely your own. That said, characters created in Bounty Hunt are subject to permadeath if you lose.

Hunt: Showdown gives players two maps to explore, and both are quite large in size. Because player spawns are randomised at the beginning of each game, they can take quite a while to fully explore. Dirty swamps and abandoned buildings litter each map, as you take on numerous and varied undead enemies on your way to each clue. Gunplay feels weighty and satisfying, and with no automatic reloading, you’ll want to pay attention to your ammunition. The maps and weapon models also highlight the slick visuals of Hunt: Showdown. Impressive lighting effects also bring out the best of each swamp and building, adding to the eerie atmosphere. While some odd texture pop-in presents itself from time to time, it in no way detracts from the clean and impressive visual nature of the experience. Sound design is also incredible thanks to the sheer amount of work that must be undertaken to keep your location a secret. Leaves crack under your feet, groups of crows fly away as they are startled or disrupted, and enemies let out guttural, banshee wails as they spot you. Everything keeps you on edge, and it never lets up. 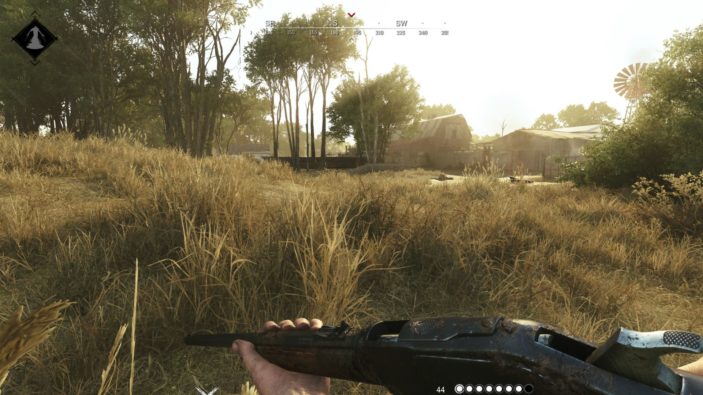 Hunt: Showdown also treats players to a beefy progression system. Taking on bounties and dispatch enemies builds your Bloodline, unlocking new weapons and abilities. There are so many weapons in Hunt: Showdown it can be overwhelming, but the rewarding gameplay makes them no chore to unlock in the short term. Hard-to-get items that require a bit of grinding may remain locked due to the lack of overall variety in content. It will depend on how much fun you’re having. That said, the Quick Play mode randomly assigns weapons, giving players an opportunity to use weapons the may not have unlocked yet so maybe give that a go.

Hunt: Showdown might not be for everybody. But if this interests you in any way, be it the unique setting, engaging gameplay structure or crisp visuals, I implore you to give it a try. While it lacks some of the variety in terms of game modes and enemy types, each play through is one filled with stress, dread and fear. The multiple stages of each mode keep you on your toes in different ways, weaving competitive PvP elements into an otherwise PvE world. Hunt: Showdown is niche; but that’s the way I like it.