High On Life Review: As Funny as it is Functional My first few hours with High On Life were something different, with the final product proving to be one of the most polarizing and subjective games I’ve played in recent memory. But it’s not for the reasons you might think. High On Life ticks many of the boxes associated with the first-person shooter genre; it’s structurally sound and functional, while being visually vibrant and engaging. But thanks to Rick and Morty and Solar Opposites creator Justin Roiland, the exorbitant amounts of humour infused into the overall experience will more than likely determine how much you truly enjoy this game.

These Guns Are Made For Talking

Players take control of an unnamed protagonist who is whisked away to another planet after an alien drug cartel invades Earth, looking to turn everyone into drugs in order to on sell them back home. Yes you read that right, drugs. It’s an admittedly hilarious concept that immediately leans into its absurdity with confidence and consistency. Along the way, you’ll meet Gatlians, an alien race of sentient weapons that you’ll wield throughout the game as they talk to you. Each with their own attacks, abilities and personalities, you can imagine this is where much of the humour finds its groove.

And you would be right. Jokes are frequent and fast paced, and while most of them admittedly land, I can also admit that I’m a kid at heart, and still like to laugh at fart jokes. If you’ve ever watched Rick and Morty or Solar Opposites, you might feel right at home here. Justin Roiland himself also voices Kenny, one of the Gatlians you’ll meet and wield very early on in the story. While the 10-12 hour story feels rather punchy and well-paced, it’s worth noting that the aforementioned humour hangs on for the entire ride. If you’re not a fan of this humour, I would still recommend High On Life simply as a functional shooter; but that’s obviously not High On Life’s intention. 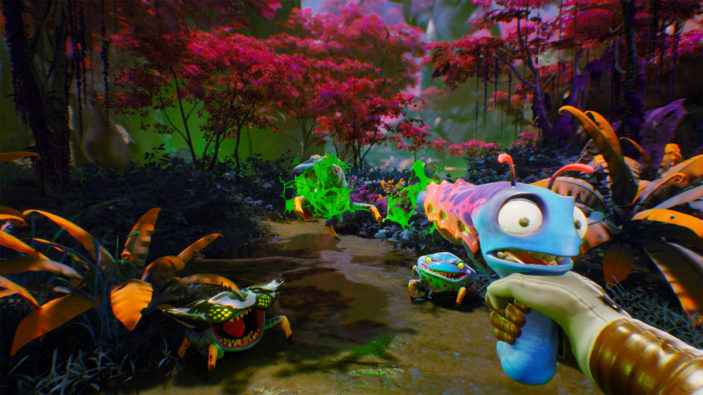 Many of the jokes landed for me personally, but I can also appreciate how the Gatlians provide much of the context for the surrounding world and its characters. Everything from the opening tutorial to various boss fights feel like like they’re paying homage to, or poking fun at various gaming tropes we’ve all come across at one point or another. There’s an organic sense of discovery and surprise that comes from these Gatlians as you simply progress through the game. They’ll point out which enemies to look out for and how to stop them, they’ll ask to be used when they sense an enemy or point of interest nearby and they’ll even tell you to stop wasting time and move on when you’re standing still for too long. Given their involvement in world building and progression, I can also understand how it can feel too much for certain players who are not necessarily a fan of this type of comedy. If that’s the case, the frequency of general banter can actually be toned down in the game’s settings. The Gatlians are both funny and useful, even if everything does feel like it’s wedged into a joke of some form.

And That’s Just What They’ll Do

Aside from the humour, High On Life plays out like a traditional first-person-shooter. It can feel a little stiffer and slower than other shooters at times, yet remains totally functional. I wish there were more weapons on offer here, but given the way they function and the sheer amount of voice acting that has to go into each, I can understand. Kenny serves as the standard pistol, while Gus serves as the trusty shotgun, Sweezy functions like the Needler from Halo, Creature launches even smaller creatures at enemies, and Knifey acts as your trusty.. well you guessed it, knife. Discovering each weapon feels more like the start of a new friendship, a connection which I never thought I would make. Each weapon also has both a primary and alternate fire, the latter of which can be used in certain situations, mainly for environmental puzzles.

They feel great to use in combat, but general encounters leave a little more to be desired. There are a few enemy types to face and while most will go down in a few shots, some of them require their armour to be taken apart before they can be damaged. Bosses also feel a little too simplistic and straightforward, although they make for some interesting and hilarious designs. But for the most part, combat boils down to taking on multiple waves of enemies in an arena, before moving on. Enemies also rarely present a challenge and I would certainly recommend cranking the difficulty up to begin with. I can appreciate High On Life’s sense of humour in pointing out such tropes, but it also doesn’t fix what already feels tedious and repetitive. Aside from general combat, you’ll spend lots of time traversing across multiple planets, each with their own unique environments. Traversal feels smooth and intuitive, and equally important to gameplay in the latter stages of the game. Most planets and environments also utilise a Metroid-Prime formula, meaning you’ll be able to explore multiple paths and areas of interest, find secrets and collectibles and occasionally backtrack to find your way forward.

Visually, High On Life is brimming with things to gawk at. From the unique and vibrant Gatlians to expansive and colourful environments, it’s consistently interesting and stimulating all at the same time. In terms of performance, things are hit and miss. The game attempts to run at 60FPS on the Xbox Series X, but never seemed to hit it consistently. However, it’s worth noting that a day-one patch seems to have improved general performance, at least on the Xbox Series X.

High On Life is a functional and downright hilarious experience, even if the humour is undoubtedly a subjective driving point. Gunplay is consistently satisfying while visuals are vibrant and diverse. The Gatlians account for the majority of dialogue and jokes, while various references poke fun at existing video game tropes and feel clever and witty. It’s 10 or so hour runtime seems a little short, but given it’s blistering pace and non-stop humour, ends before it ever wears out its welcome.