Gotham Knights Review: The Tale of the Bat Squad 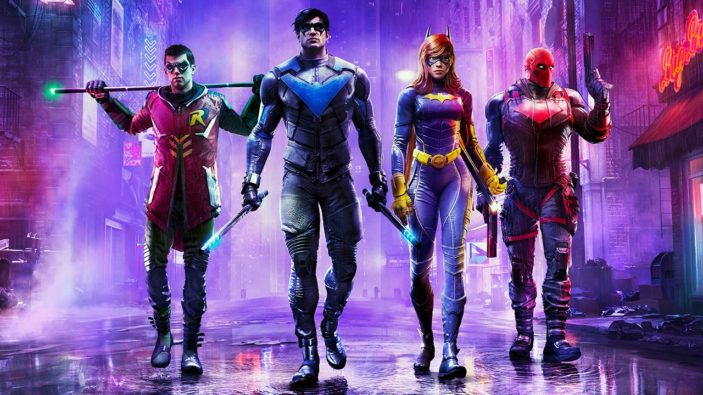 Gotham Knights shines a much needed light on the accompanying sidekicks that Batman has either trained, raised or worked with. From the likes of multiple Robins both past and present, including Nightwing and the Red Hood, there’s much to be told and explored within the confines of these characters in video game form. As a result, Gotham Knights aims to build on the previous Batman Arkham games, as unrelated as they are. But what follows is a largely mixed bag, filled with an interesting story and stunning open world, but ultimately weighed down by repetitive combat mechanics and a relatively dated mission structure. The RPG elements included here go a long way in allowing you to build, customise and develop your favourites, but do little to ease the overall grind of the experience.

Gotham Knights takes place immediately after the death of Batman. After an undoubtedly impressive opening cinematic highlighting the context of the situation our heroes must deal with, they are unfortunately left to pick up the pieces of crime-ridden Gotham. The Gotham Knights consist of four heroes; Dick Grayson, the original Robin, now known as Nightwing, the rough but loveable Red Hood, the current Robin, Tim Drake and Barbara Gordon, having left her days of the Oracle behind to don the Batgirl cowl once again. In terms of personality, each hero is distinct and rather complex in terms of their past and relation to Batman, blending their own lessons and experiences into the task that lies before them. The interactions between our heroes are standard for the most part, with the narrative lending itself to some slightly more emotional deliveries from certain characters down the track. 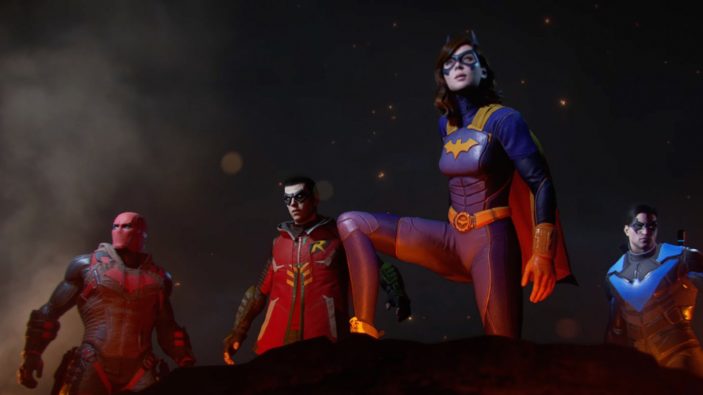 With our four heroes now labelled the undisputed caretakers of Gotham, a series of events unveils the Court of Owls, a mystical society hidden below the city for many years, who have now come to the surface with ill intentions. After what feels like an extended introduction to both the protagonists and broader world, becomes the central conflict of the narrative, driving both our heroes and their alter egos forward as a result. I quite enjoyed the mystery behind this portion of the story, thanks to some clever writing and high stakes when the narrative reaches its boiling point. That being said, the story itself simply takes too long to get going. Along the way, you’ll also run into Gotham’s prominent villains, but the opening hours of the game feel set on introducing and unintentionally cementing the grinding pace of gameplay, which we’ll touch on later.

For Justice, For Gotham

You’ll be able to choose between and take control of each of the four Gotham Knights at any point in the story form the Belfry, which serves as the central hub for our heroes. That being said, they all control the same in terms of both combat and traversal. Heroes can utilise a combination of light, heavy and ranged attacks, each with their own purpose and effectiveness during combat. The combat itself is largely repetitive however, with general attacks lacking any of the fluidity and impact felt in the Arkham series. The fact that both light and heavy attacks are confined to a single button also drums in the eventual monotony, particularly during longer patrols. Counter attacks can also be utilised, but once again lack the sleek satisfaction that Batman had once provided. Each hero brings a certain amount of variety to the table through ranged attacks, from Nightwing’s darts, to red Hood’s dual pistols and Batgirl’s signature Batarangs. Certain enemy types can be affected by certain attacks, with larger or shielded enemies needing to be weakened or stunned by heavier blows.

Stealth on the other hand, feels incredibly functional and works as well as it did in the Arkham series. Each hero will also unlock up to four special abilities, which can be used by building a special metre to unleash rather devastating results. Players will also be able to traverse the city of Gotham with either the Bat cycle or their trusty grappling gun, with each characters’ signature traversal mechanics locked behind certain gameplay-based objectives. It’s a shame that both standard methods of transportation, as functional as they are, feel a little stiff and underwhelming, lacking any sense of speed and momentum. 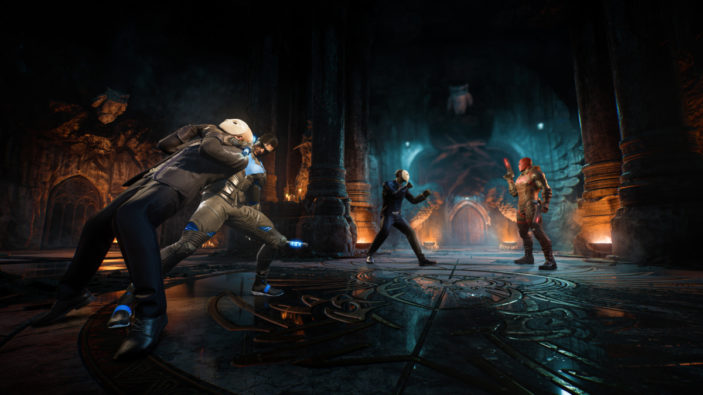 Characters can also be upgraded throughout the course of the narrative, from armour and weaponry, to more advanced skill trees and unlockable special abilities. This portion is in many ways both the saviour and downfall of Gotham Knights, highlighting the sheer variety of customisable and upgradable options, while also highlighting the true price of the gameplay grind and hours required to flesh out your preferred characters. You’ll need to head out into the city on patrols to stop both random and premeditated crimes from bring carried out in order to gain both AP points for unlocking character abilities and experience and resources for crafting new weapons and upgrading armour.

It also doesn’t help that characters level and scale individually, meaning time spent with one character, will mean another gets left in the dust. I tried my best to balance missions and time between all four characters, only to realise I needed to push even harder on patrols, going the extra mile to keep everyone on the same level; inadvertently taking up more of my time as a result. It’s here where I believe the gameplay wears so thin, simply because you’re expected to partake in the same repetitive mission structure to achieve the desired results. Random crimes amount to finding and stopping a group of thugs from robbing a bank or hijacking a van full of money, but never reaches further than realistically needing to fight and defeat a single weave of enemies. Premeditated crimes provide a little more context into solving and discovering potential crimes that will indeed occur, by investigating an initial crime scene to determine the location of the upcoming crime. These small moments of investigation rarely develop beyond surveying a crime scene to highlight all available options, with a single option pointing out the scene of the crime.

Tour of the City

It’s also worth noting the rather controversial blend of visuals and performance on display in Gotham Knights. With no performance mode to be found, Gotham Knights runs at 30fps on next-gen consoles. What can only be described as a standard frame rate for the aforementioned platforms, frequently sees dips into subpar frame rates. They’re not necessarily consistent nor game breaking, but ultimately frustrating. On the other hand, the city of Gotham looks gorgeous. A departure from the Arkham games means a new Gotham City, doused with colourful lights and atmospheric fog. The draw distance is also impressive, highlighting the true sense of scale and openness that the city offers over three distinct islands, all of which can be seen at any given time, provided you’re high enough to see them. It feels like a balanced blend of Gotham Cities seen in previous films, between Tim Burton’s anachronistic, grounded approach and Joel Schumacher’s more colourful and boisterous approach. Character models have also been given a considerable level of attention and detail, with both facial animations and general textures adding yet another layer of visual polish and consistency. 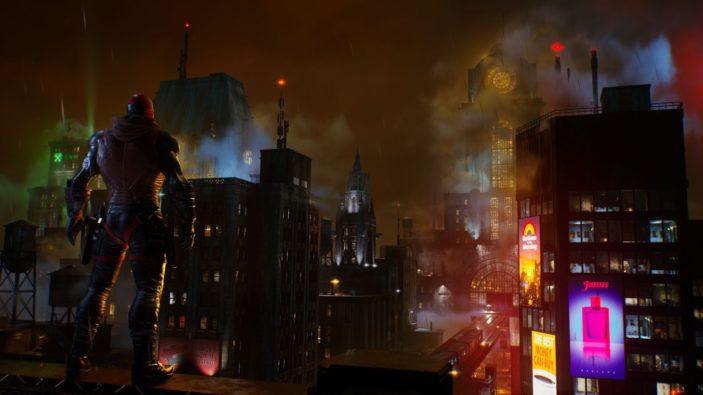 Online cooperative play is also available in Gotham Knights, allowing two players to team up and patrol the streets. It’s incredibly easy to do, but only unlocks after you’ve competed the initial missions of the narrative, which may take an hour or so. Beyond that, feel free to jump in with both random players and friends alike, thanks to drop in/drop out access. The lack of any cross play is a little disappointing, but I would definitely recommend pairing up with a friend for the most fun, particularly when partaking in standard crimes and patrols. That being said, players will rarely be limited on what they can do within the story, allowing newer players to jump on board with a more experienced player for missions they have not yet encountered. It definitely pays to experience the narrative at your own pace, but any missions played within another player’s story can be skipped within yours, if you have already completed them cooperatively.

There’s an incredibly functional and intriguing experience a the heart of Gotham Knights, thanks to the engaging central narrative, a diverse set of customisable and upgradeable heroes and sleek visuals to boot. But it ultimately feels weighed down by its repetitive mission structure and simplified combat that build towards the inevitable grind that most RPG’s are now accustomed to. The Court of Owls definitely deserve the spotlight, but Gotham Knights feels like it’s too preoccupied on encouraging progression through it’s overuse of mechanics, that overstay their welcome before any of the initial elements like customisation and general progression have been fleshed out. Batman fans will more than likely appreciate the accurate representations of their favourite sidekicks, even if the overall longevity of Gotham Knights remains in question as a result of the grind.