Games Review: Wargroove is the Advance Wars revival of your dreams

It’s been 16 years since the release of Intelligent Systems’ Advance Wars 2, widely considered one of the greatest turn-based strategy titles ever made, and 11 years since Advance Wars: Dark Conflict (titled Days of Ruin in the US). The intervening period saw the popularity of Intelligent’s Fire Emblem series explode in the West, an unexpected turn that largely consigned the Wars series to the vault.

There were abortive attempts to bring the series into real-time 3D on the Gamecube and Wii, but they never really took. They didn’t have the juice fans were looking for. They didn’t scratch the itch.

Fans of the series openly wondered if they’d have to live with that itch the rest of their lives. Short of Nintendo miraculously hauling the franchise out of cold storage, would there ever be another game that could give them the turn-based battle they craved?

Enter Starbound developer Chucklefish, who apparently felt that if Nintendo wasn’t interested in making Advance Wars titles anymore then they’d just do it themselves. The result is Wargroove, a game that not only openly uses Advance Wars as a template but improves upon its formula in smart and crucial ways.

From the overworld map to the way the screen splits in half when commanded units launch their attack, Wargroove is every inch the reincarnation of Advance Wars. Its character sprites are simple but easily distinguisable on the battlefield. The battle animations are fluid and characterful, allowing it to nail down the same cartoonish tone without damaging the often intense stakes of each battle.

The main campaign eschews Advance Wars’ modern combat approach in favour of a medieval fantasy setting more akin to Fire Emblem. It takes its time unraveling the full tech tree and suite of mechanics, which is good because the complete list is rather long. Every unit comes has its own set of abilities, each of which will need to be leveraged in the right ways at the right time to secure victory.

As in Advance Wars, each map tile conveys certain stat buffs and debuffs. Some units do quite well in heavily forested areas while some prefer open plains. Some units prefer the high ground and will be best placed on nearby mountains, while others are exclusively suited to the lowlands. Looking at the numbers and knowing what to place and where will become a key component in any winning strategy.

The campaign is set in the continent of Aurania and follows a young woman named Mercia. Mercia is descended from the Cherrystone Kingdom’s royal family. When her father the king is assassinated, Mercia finds herself crowned queen in his stead. The political situation is dire — war has been declared on the Felheim Legion, the nation claiming responsibility for the king’s murder, and Cherrystone desperately needs allies. These allies are how Wargroove opens up other commanders for the player to try out.

Each commander has a special move, or Groove, of their own; One drops a crystal that drastically buff the defense of any friendly unit within several squares of it, another is quite selfish, draining health from enemy units using it to heal only herself.

There are upsides and downsides to the ways Wargroove tackles the formula. The old pop-up menus are retooled to put the most useful options at the top rather than the bottom, which is great! No more endless scrolling for moves you make all the time! The flip side is that it also removes the ability to undo an accidental wait action which is rather painful. 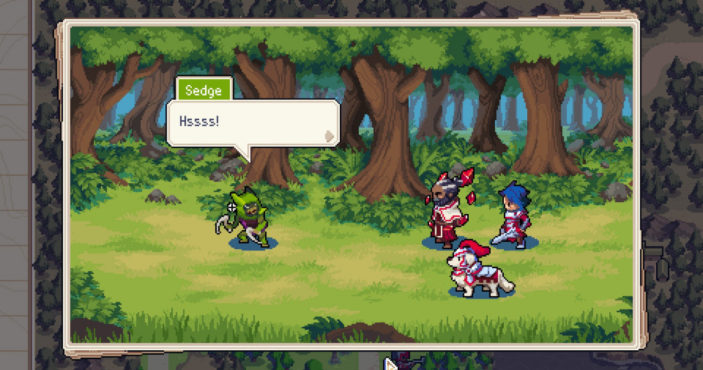 Chucklefish has remembered that one of the best aspects of the Advance Wars series was its multiplayer. Indeed, Chucklefish works hard to accommodate for as many ways to play multiplayer as they can think of. There’s a local four-player pass-around version for those with only one console or controller, there’s online multiplayer including competitive and co-operative play, and they’ve even nailed down cross-platform play so friends can face off or buddy up no matter what platform they’re on. The multiplayer component really does feel like the area where Chucklefish have tried to go the extra mile and it shows.

While no slouch on the Xbox One and the PC, with a PlayStation 4 version set to drop any minute now, it isn’t surprising that the game feels most at home on the Switch. Advance Wars was built with portability in mind and Wargroove has that same vibe. Its deep, turn-based gameplay works great on a handheld because it allows you to pick at a mission throughout the day. Pick it up and play a turn whenever you get a moment, or binge an entire scenario in Arcade mode when you get home at the end of the day.

Chucklefish have accomplished something remarkable with Wargroove. They haven’t just resurrected a game most had thought was gone for good, they’ve proven that is still as vital and compelling today as it has ever been. Truly, the most surprising thing is that it took this long for someone to pick up the torch.

Review conducted on Nintendo Switch using a retail edition purchased by the author.