Games Review: There are no Fighting Dreamers in Naruto to Boruto: Shinobi Strikers (PS4, 2018)

Naruto to Boruto: Shinobi Strikers feels like a massively missed opportunity for a fun and robust multiplayer Naruto game. Building off the success of the Ninja Storm series, Shinobi Strikers is a weak follow up that rarely capitalises on the unique appeal of the Naruto franchise.

Essentially, Shinobi Strikers is a multiplayer fighting game that contains a variety of modes and battles to explore. The action takes place in two key arenas – the VR Ninjutsu Arena, which allows players to tackle solo or group missions, and the Ninja World League, where competitive fights take place.

Missions available include a variety of mini story-based missions, some of which are based on classic Naruto history. Kakashi’s bell-stealing mission features, as does a fight with giant frog Gamabunta, as well as the Destruction of the Leaf story arc. Missions require you to complete a variety of actions including defeating waves of enemies, defending the Leaf Village’s town gates and collecting items. 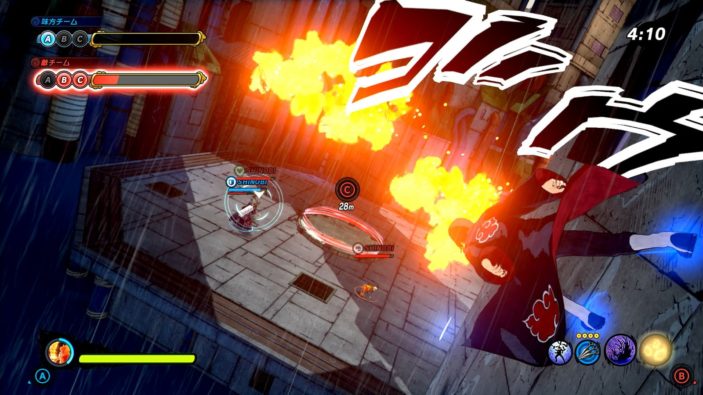 The Ninja World League is another key feature of the game, matching players up in 4 v 4 battles in a variety of modes including base battle, flag battle, combat battle and barrier battle. Base battle is the best of the lot, allowing players to face off against each other to claim and defend their team bases. Flag battle is another highlight, as it operates much like traditional capture the flag. These melees are heavily inspired by classic tournament gameplay, and can be great fun with a solid team.

Combat is vastly different from past Naruto titles, with a steep initial learning curve. It relies heavily on blocking, dodging and substitutions as players can be knocked out in battle easily. Pairing solid defence with powerful jutsus, well-timed attacks and a hefty amount of strategy will ensure the best approach, but even your best-laid plans will often be thwarted by crafty enemies and overpowered ultimate jutsus.

Shinobi Strikers relies on online player, and yet matchmaking can be extremely painful – most missions require between 4-8 players but even that becomes a difficult task requiring you to wait up to 5 minutes on some occasions. I also frequently encountered network errors within the game despite having an active and stable wireless Internet connection.

Successfully completing missions and battles will earn players a variety of rare scrolls, which can unlock cosmetic items and weaponry for player customisation. These scrolls work largely like loot boxes, although it should be made clear that they can only be earned through gameplay. Collecting more cosmetic items will allow players to create their own Naruto character, and in my case, allowed me to live out all of my early 2000s fantasies.

In addition to new cosmetic items, players can also obtain brand new jutsus and special attacks by pairing up with a VR master and levelling up their bond. This level grows in parallel with overall player levels, although differences in level appear to do very little in battle against other players. Players at level 63 will do the same amount of damage as players at level 15, and while it does make for an equal playing field it makes levelling up feel very unrewarding.

Naruto to Boruto: Shinobi Strikers isn’t without merit. The gameplay is fun and lively, and is bolstered by its balanced levelling system and healthy competition. The cel shaded graphics pop on screen, and the ability to create your own custom character is a genuine delight. While it doesn’t feel complete just yet, there’s plenty of opportunity to build on Shinobi Strikers’ intriguing foundations in future.