Games Review: Paladins: Champions of the Realm (PC, 2018): Something borrowed, something new

There is a trend in modern AAA game design of pinching the best ideas from other games and building on them to create something new. Hi-Rez Studios is a developer that has built a successful portfolio by doing exactly this. They are very good at looking at successful multiplayer games, distilling their most enjoyable components and putting their own spin on them. When Hi-Rez’s team shooter/MOBA hybrid Paladins went into early access a couple of years ago, a major source of amusement among the gaming community was in how closely, sometimes shamelessly, it resembled Blizzard’s Overwatch.

This review represents the first half of a two part review. It focuses specifically on the Windows PC version of Paladins, while the review’s second part will focus on the Nintendo Switch version.

I don’t necessarily want to spend this review harping on Paladins connections to its direct competition. I don’t, because it’s actually a lot more than the sum of any of these comparisons, but I might have to anyway.

While Paladins does hew very closely to Blizzard’s model — every part of its artwork and character design seem to have been crafted with one eye on the Overwatch style guide — it does still manage to differentiate itself from Overwatch enough that it can’t be reasonably called a rip off. It would certainly be easy to call it that, but it would be inaccurate and, I think, reductive.

With that in mind, let’s start with where there is some overlap. There are characters in the game that are a one-to-one parallel with Overwatch. You have characters like Russian grunt Viktor, who plays very similarly to Soldier: 76. You have Androxus, a character that blatantly steals Reaper’s style but is more of a mechanical blend of Reaper and McCree. You have Barik, a short, bearded man that deals in shields and turrets. The physical and mechanical similarity to Torbjorn does not feel co-incidental. These are the most obvious pulls. There are several others. 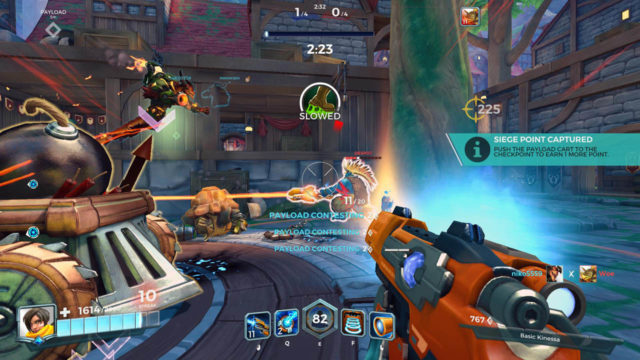 But Hi-Rez don’t stop there. They crib from other games too, some entirely unrelated to the team or hero shooter genres. There is a character named Pip who looks like someone traced a picture of Ratchet and stuck him in the game. The same goes for support hero Talus, who appears appears to be a cross between Midna from The Legend of Zelda: Twilight Princess and Ico.

In terms of how Paladins plays, if you’ve played a shooter like this you should have a good idea already. Matches play out on maps built for specific game types, like Payload or Hybrid. Hybrid seemed to be the mode that popped up most for me, with levels that felt like they were constructed much more in the lane-centric, MOBA style than the flank-heavy layouts Blizzard prefers. They seem much shorter than in other games however, with no match I played in typically lasting longer than about four or five minutes on average. Your heroes even get mounts to allow them to move around each map much faster than on foot, another MOBA trope that distances Paladins from its competition. Indeed, that seems to be Paladins big point of difference. They’re leaning much harder into, and doing more creative things with, specific MOBA genre tropes than Blizzard ever have with Overwatch.

Having played the game on PC, I can tell you that the hundreds of hours I’ve spent on Overwatch in the last couple of years prepared me for Paladins in ways I wasn’t expecting. For one thing, I needed no other character but Viktor. I can’t hit the floor with my pants when I play Soldier: 76 in Overwatch but with Viktor, who functions much the same way, I am utterly lethal. Headshot after headshot after headshot. I had never played Paladins before in my life and I was topping the scoreboard game after game. I’m not trying to sound boastful here. When I play Overwatch, I am a below average DPS player at best. I have no idea if Paladins throws you into a New Player category to begin with where everyone’s still getting their feet wet, but I created havoc on every sever I entered. My team won every game handily. It is worth nothing that despite racking up some impressive kill streaks, I rarely took home the play of the game (yeah, they pinched that too).

Staying together as a team proves crucial, as does figuring out which characters and their abilities synergise well together. Maps and hero types allow for interesting strategies and some really tense moments of back and forth when the teams are actually evenly matched. 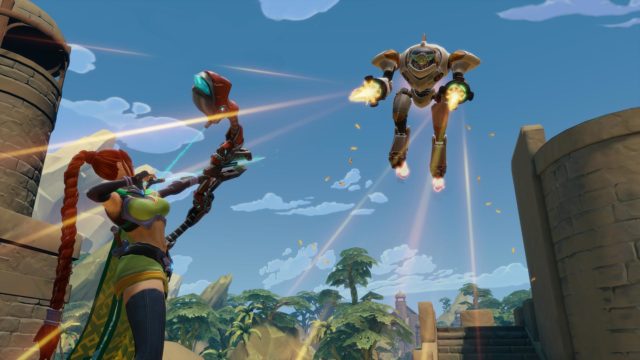 The good news for Australian players is that not only are there local servers, the game’s free-to-play business model means there’s no shortage of people waiting for a game. I was off to the races after waiting only moments to as the matchmaking did its job.

A significant difference in matchmaking between the PC and Switch versions of the game lies in cross platform play. The PC version of the game is self contained, meaning you’ll only be playing against people on the PC platform. The Nintendo Switch version of the game features cross platform multiplayer with players on Xbox One. For PS4 players, as with the recent kerfuffle surrounding Fortnite, there’s no cross platform compatibility meaning you’ll have to battle amongst yourselves. Leaving PC players out in the cold makes sense — the accuracy of a mouse in a shooter title like this would leave console players at a massive disadvantage. Grouping console players together helps bolster the console player base considerably across the board.

Paladins is an interesting genre-bending experiment. It makes no bones about where its inspiration came from, but it’s also not content to sit on its laurels as much its art style might suggest.