Luigi’s Mansion for GameCube was a masterpiece in-game design, becoming one of the best-selling titles of 2001 and leaving a legacy of greatness in its wake. With a long-awaited sequel released on 3DS in 2013 and another scheduled for Switch in 2019, it only made sense for the game to make a grand return. While the game mostly holds up, in 2018, Luigi’s Mansion is not what it once was.

For those who haven’t played the original, the game follows legendary scaredy-cat Luigi as he explores an old, haunted mansion and attempts to rescue his brother, Mario. Equipped with Professor E. Gadd’s Poltergust 3000 and a handy flashlight, Luigi must conquer areas filled to the brim with vengeful ghosts of all kinds. 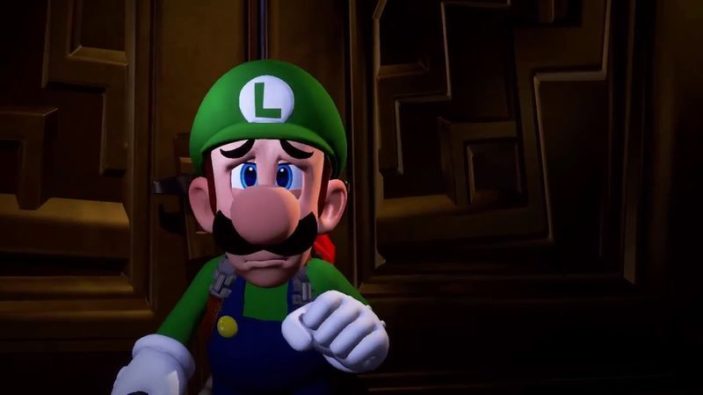 Most areas can’t be unlocked without discovering hidden keys across the mansion, with more of the map being revealed as boss ghosts are defeated. Each ghost has a unique exploit to capture it within the Poltergust, and puzzling through these weaknesses adds a new layer of challenge to the game.There’s also a brand new co-op mode that is exclusive to the Nintendo 3DS remaster. Friends can join your game under the disguise of ‘Gooigi’, a wobbly green jelly version of Luigi, and help to defeat the ghosts by your side.

The most striking thing about Luigi’s Mansion on 3DS is how gorgeous it looks – the game has been given a complete graphical overhaul. Textures are crisp and neat, and the world retains its spooky charm with added 3D flourish. While the 3D is done beautifully, it does bring out a brand new issue, that of poor depth perception.

Whether the game is in full 3D mode or just plain 2D, it’s incredible difficult to determine where ghosts are within a room. Trial and error over the process of the game’s length will give you some idea of how depth works in the game, but often, flashlight blasts won’t hit even if they seem visually accurate. This creates a major problem when multiple ghosts are present, as missing a single blast costs valuable time. 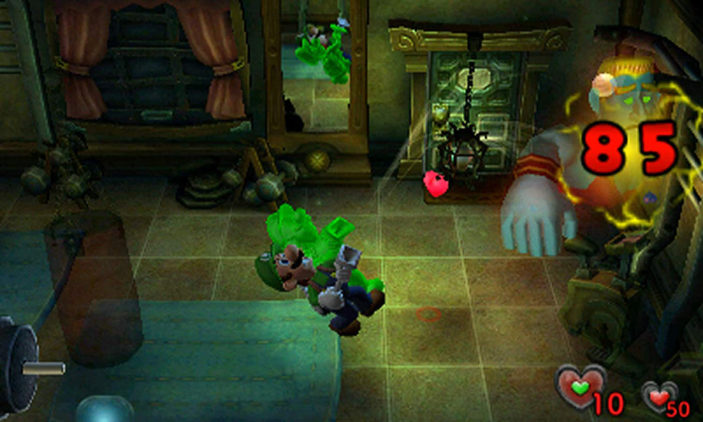 This is also indicative of another major problem that the game has: difficult and unwieldy controls, no matter which game mode you choose. Essentially, you can manoeuvre Luigi any way around the mansion, but sucking and charging a flashlight will mean he has to stop and pivot on a y-axis only. Once Luigi uses any of his tools, he’s rooted to the floor, meaning any sneaky ghosts can attack him while stationary.

The process of walking, exploring, flashlight-ing, sucking and taking photos with the in-built Game Boy Horror is a UX nightmare. Without streamlined, simple controls, even the act of defeating lesser ghosts can become near-impossible. This is clearly a layover from the unintuitive days of gaming’s past, but on the 3DS, the issues with the control scheme become a lot clearer. Mastering it takes time, and by the time you know how to play, the experience will all be over.

Surprisingly, Luigi’s Mansions is incredibly short, though well paced. The game takes place solely within the haunted mansion, and contains four key areas to explore, each with a variety of bosses. The whole game takes around six to eight hours to complete, and never overstays its welcome.

Luigi’s Mansion is an essential title in Nintendo’s line-up, a game with a legacy that’s still felt today. While it might seem dated to today’s audience, there’s no doubting how important it is to video game history. Hampered by an archaic control system, this version might not be completely satisfying to the modern gamer, but the title is still well worth playing, and presents a unique and fun tale.

Review conducted on a Nintendo 3DS using a pre-release retail code provided by the publisher.