Hand of Fate 2, the card-based role-player by Brisbane-based Defiant Development, launched on major platforms last year. Its Nintendo Switch port took a little longer to arrive, but arrive it has and, for Switch owners, it was worth the wait.
Hand of Fate 2 follows a similar gameplay loop to its predecessor, something rather akin to a game of Dungeons & Dragons — you interact with an arbiter of order and chaos who controls the game world, and they respond to the choices you make in real time. You take a seat opposite a mysterious hooded individual who arranges a series tarot cards on the before you. Each tarot card represents a situation your character must respond to, be it combat, an obstacle or a skill challenge. Read from left to right, these seemingly randomised cards will string together your character’s next adventure, from beginning to end, with each scenario played out in turn.

Some encounters are conducted entirely on paper, with a written scenario posited to the player and a series of reactions or choices they can make — these encounters are often decided with the roll of several dice, which only lends the D&D comparisons further weight. Others are more straightforward combat encounters that drop your hero into a more traditional third-person view in which you must use your character’s abilities to brawl your way to success. Hand of Fate 2‘s interlocking systems and progressive approach to telling a story progression result in something extremely cool. As in the original, Hand of Fate 2 has so many great ideas and I’m glad the original’s success meant Defiant got the chance to expand on them. 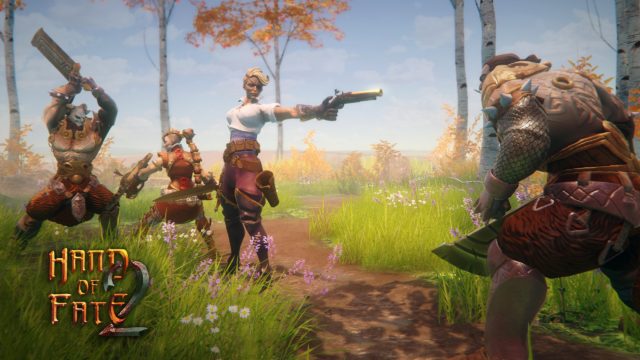 Among these expanded and updated mechanics are new companion characters, new weapons and combat styles and even new enemies bound to fresh card suits. All of these changes appear fairly small scale when I lay them out like that but they have far-reaching ramifications in-game — picking the wrong combat style might get you walloped in a fight, having the right companion with you at the right time might save you from ever getting into that fight altogether. It encourages replayability, switching things up to see what happens when you alter your loadout and your picks.

The Switch version is not without its hiccups, though this seems to be less on Defiant and more on the Switch’s hardware than anything else. Performance-wise, Hand of Fate 2 does have it where it counts. In the combat sequences where the camera is pulled out reveal landscape and other enemies, the game performs admirably with few frame drops or stutters. Its in the One-on-One sequences with the Dealer where the Switch seems to struggle. It doesn’t seem like any particular part of the scene should cause the Switch to chug. Its a fairly standard tavern environment, in close up, without much on screen at all. Therefore, I have to assume the game is sorting through an infinite universe of possible card combinations, looking for just the right one to fuck me. Its worth noting that this experience was largely contained to playing in TV Mode. Whenever I jumped the Switch over the dock and played in Handheld Mode, everything ran a great deal more smoothly. 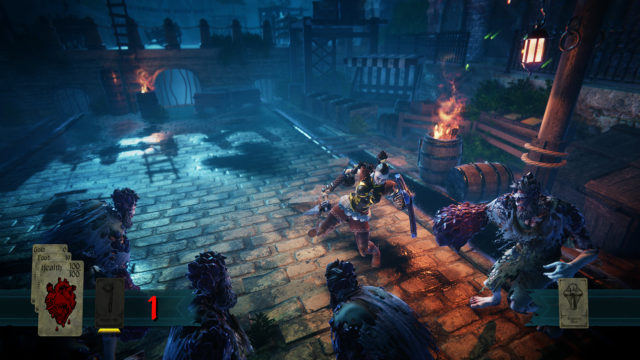 Combat itself remains a little on the clunky side, but with green and red indicators, targeting reticles and more, it is very readable. While I’m loathe the compare anything to Dark Souls ever again, the basic tenets of combat in Hand of Fate 2 are essentially the same — keep moving, don’t be afraid to wait your enemy out, look for opportunities and safely get your strikes in when you can.

Hand of Fate 2 isn’t perfect, and it has some rough edges that may snag unwary players, but I also have a hard time putting it down when I start playing it and that’s as high a compliment as I can pay it. When Hand of Fate 2 is firing on all cylinders, it is an engrossing, challenging and rewarding experience. It works hard, every time you play it. to surprise you. Being able to take it with you on the go is just the icing on the card shaped cake.