If I know one thing, it’s that the Far Cry series has always found its beauty amongst the insanity. From highlights like Far Cry 3, it’s safe to say the series had morphed from a tropical survival experience into an insane holiday of blood, hallucinations and chaos. Far Cry: New Dawn stands as a worthy entry into the series not just as a sequel to Far Cry 5, but a dense, colourful and most importantly, insane world that I found myself wanting to come back to even after the credits had rolled. Some repetitive mission structures and difficulty spikes keep the game from creating a truly fresh era of Far Cry games, but it is truly safe to say that Far Cry: New Dawn takes strides back in the right direction.

Taking place 17 years after the events of Far Cry 5, players are put in the shoes of a custom character known as ‘The Captain’ as you defend the town of Prosperity from the two wicked identical twins Lou and Mickey, who serve as the story’s antagonists. It is truly hard to describe the story of New Dawn without spoiling the end of Far Cry 5 but I’m afraid it is a necessary evil as the game makes you aware of the previous game’s shock ending regardless. As the town of Hope County has been completely ravaged by nuclear bombs, you are now left to your own devices in a world slowly finding its feet again. The story itself is sadly a little disjointed as its two halves are shockingly different. The first half of the story is admittedly a little plain, following the same footsteps as its predecessor by visiting various ‘specialists’ across the map in order to employ their services for the town of Prosperity. However, the second half is what can only be described as a return to the hallucinogenic chaos that made titles like Far Cry 3 so memorable. 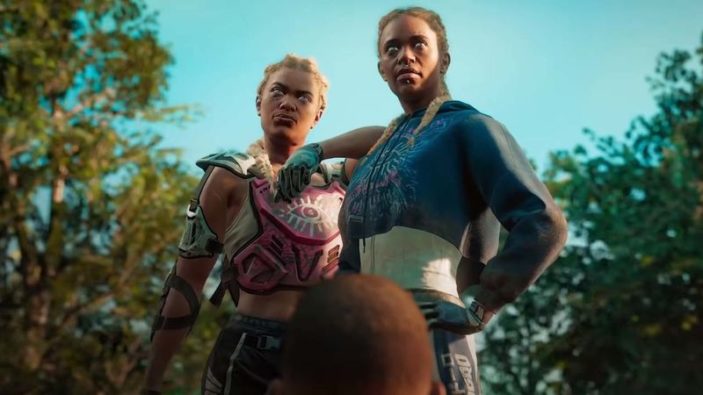 It’s not that I wasn’t a huge fan of Far Cry 5, but the town of Hope County did little to make me feel like I was playing a Far Cry game. The lack of tropical locations or dense colours in Far Cry 5 made me hesitant to jump on board with New Dawn, but boy was I proven wrong. Colour is the name of the game in New Dawn, and it is truly a feast for the eyes. Bright pink foliage litters every patch of grass, as neon yellow trees hang low creating a crazy contrast that litters the entire open world. The open world mimics that of Far Cry 5, but it is slightly scaled down, with major locations from Far Cry 5 still strewn about in all their post-apocalyptic glory. However, the dense nature of the open world is the true attraction here. Wildlife interact with each other as prey flee from predators, and react accordingly to your presence. The open road always seems to offer up an opportunity to create chaos in the form of confrontations with Lou and Mickey’s crew, ‘The Highwaymen’ as these interactions vary from random attacks to stopping passing trucks carrying prisoners of war. These interactions were a major highlight of the experience as their presence can be tackled in any way you wish and can even create some huge blockbuster moments. 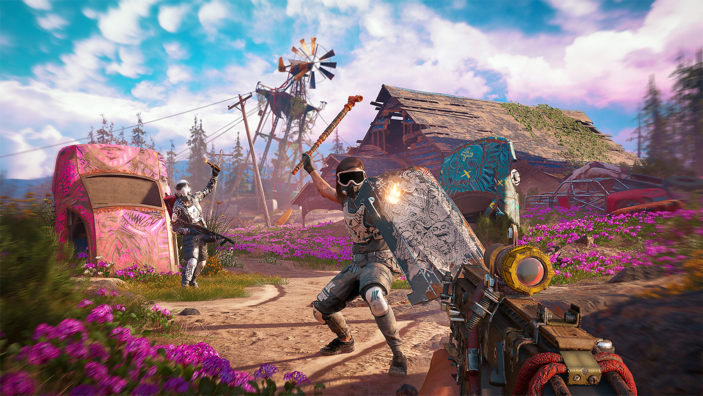 It’s not to say that the main story missions are bland; for the most part, the second half of the story is a non-stop thrill ride that brought back joyous memories of Far Cry 3, focusing more on the antagonists and less on the admittedly bland supporting cast. Completing missions for various specialists across the map range from fetch quests clearing waves of enemies, and thanks to some functional combat mechanics, I definitely had fun playing, but I didn’t feel like I was progressing in any real or meaningful way. It seems to be more of a victim of its predecessors in terms of repetitive gameplay which is a shame, as the second half of the story sets you on a particular journey that is tied together much tighter, in turn focusing on its antagonists and their true motives. While side missions are much like the main missions in terms of simplicity and structure, outposts prove to be just as entertaining as they have ever been. When outposts are captured, ethanol is earned as currency in order to upgrade various aspects of Prosperity, giving you the ability to craft more advanced versions of weapons and vehicles. Given it has an immediate effect, the ability to recapture these outposts for another batch of ethanol at the price of increased difficulty definitely gave me a reason to come back for more. 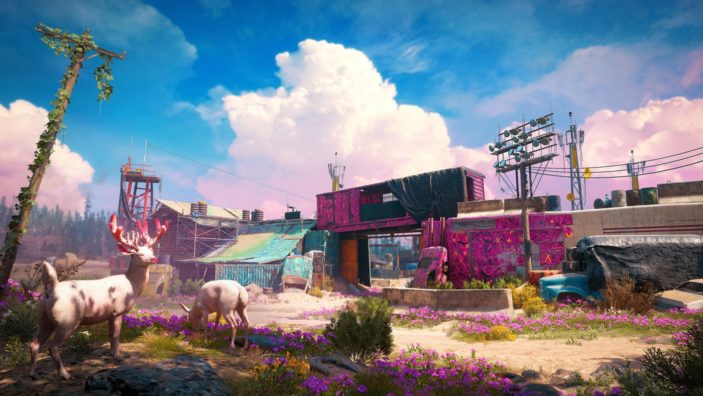 There’s some real magic in Far Cry: New Dawn in the way it has been sewn together, and the shorter length and condensed map doesn’t seem to hurt it in the way that you might think. Being the first true sequel in the Far Cry franchise, it is evident that Ubisoft was confident and comfortable in telling more of this story, thanks to some memorable returning characters in addition to the aforementioned newcomers. While Far Cry 5’s antagonist John Seed was maniacal and deceiving, his evil presence was more of an implication that an outright atrocity up until the shocking ending. Here, it’s reversed, as the both Lou and Mickey are rage-filled psychopaths looking to assert the dominance across Hope County at any cost. Seeing them in action reminds me of Vaas and his antics in Far Cry 3, which is a welcome return in terms of pace and variety. However, as seen in the trailers, John Seed does make a return and absolutely carries over the performance from Far Cry 5 while adding some much-needed depth to the character as the New Dawn takes steps in allowing you to understand John’s true intention.

Overall, Far Cry: New Dawn is a worthy standalone experience that takes strides back the Far Cry series of old that stood out as truly unique experiences. While a disjointed story stumbles in the early hours, the antagonists make your return Hope County worthwhile, paired with some solid functional gunplay and dense open world. The intense colour palette never ceases to pop and everything is aimed at creating a non-stop experience of blood and insanity. Some repetitive mission structures show their age well before the story has ended, but some random encounters turned blockbuster moments reminded me that Far Cry is an old dog can still perform some impressive new tricks.