And now, a take that may be controversial: Diablo 3 is way better on console than it is on PC.

No seriously, hear me out on this one.

While Diablo 3 has been available on the Xbox One and PlayStation 4 for some time, this is the game’s first appearance on the Nintendo Switch or, indeed, any Nintendo platform. For those unfamiliar with the way the game has been altered in the move from the PC, the console version of Diablo 3 feels much more like a co-operative action game than it does an ARPG. For comparison’s sake, it would be easy to say Diablo III: Eternal Collection has more in common with something like Baldur’s Gate: Dark Alliance than with Grim Dawn. This shouldn’t surprise many long-time fans — Diablo 3 is widely regarded as the most palatable entry in the series, a swerving away from the grimdark atmosphere established by the first two entries.

To understand why Eternal Collection works as well as it does, we have to go back for a bit. Diablo III has been around for a while now. It launched on Windows and Mac platformers back in May 2012 and quickly dismayed fans of Diablo II by realigning the series to feel less like an ARPG and more like an MMORPG. This, in hindsight, must have made sense within Blizzard Entertainment at the time. World of Warcraft had conquered the world, boasting a player count that still beggars the imagination to this day. It would have made sense for Blizzard to try to guide some of that gigantic audience over to what had been their most niche franchise. And so Diablo III was remoulded to feel a little less dark, a little more heroic and a lot more like an MMO.

An Auction House was introduced, an in-game location where accrued currency and real money could be used to purchase high tier gear, a move that negated much of the grind of Diablo II. The Auction House was a source of huge irritation among the Diablo community, who felt it undermined the very essence of the ARPG as a genre. Why bother playing the game at all if you can just buy great gear? This was something Blizzard later moved to rectify with the Diablo III 2.0 update, an unprecedented and wholesale rebuild of the game that attempted to remove much of that MMO-infused connective tissue and replace it with something that felt more authentically Diablo. 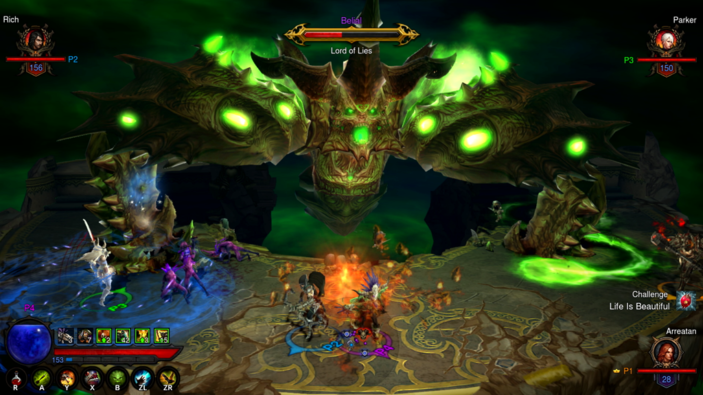 There are, of course, plenty of things that the 2.0 update couldn’t fix. From a narrative perspective, Diablo III still feels like a relic of the MMO era. The story is bad, and it can’t seem to settle on the tone it wants to strike. It makes a number of truly bizarre decisions like killing franchise favourite Deckard Cain to give his adopted niece a Leah (a character the audience have never met before and know nothing about) a kind of half-baked Luke Skywalker arc, Tyrael cops a dire amnesia subplot that feels like its straight out of a soap opera and no-one seems especially perturbed by the fact that almost all the Primevals appear to be stirring. In Diablo II, players rarely met anyone outside of heavily fortified camps because to go beyond those walls was incredibly dangerous. Demons wandered the landscape, tearing to shreds anyone foolish enough to venture forth.

In Diablo III, you run into people in the wilderness all the time, people who are surrounded by demons all day long and are a) somehow alive and b) bafflingly chill about the situation. People are cracking jokes. At one point, the guy who played the dad in Kung Fu Panda shows up to get some goofy jokes in. Decisions like these rob the game of any stakes it might have had. It doesn’t feel like anyone’s terribly worried about the Lord of Terror’s machinations, someone will get around to dealing with it. None of the dialogue properly communicates a world in peril or a crisis in progress. If the characters in the game aren’t taking the Primevals seriously, why should the player? The dialogue runs the gamut from serviceable to “beaten over the head with the exposition hammer” and almost every voiced line is delivered in the winking, noblebright spirit of World of Warcraft. A lot of it feels like placeholder material that somehow made it into the final game.

Okay. So what have we learned? We’ve learned that Diablo III was a product of its era and hard proof that, from time to time, even Blizzard can get it wrong.

With all of that asserted, here’s why console version is great.

Rather than trying to translate the PC version of the game to another ecosystem, Diablo III: Eternal Collection strips the game back to what I would consider to be “just the fun stuff.” You hit the couch with a few friends, pick a character class (this package also includes the Necromancer DLC) and kick the shit out of some goddamned monsters together. You stomp and you loot and cut down mob after mob of unsuspecting demons. It’s so much fun and it feels so good. You can find gems for crafting and upgrading and you jam them into your gear sockets. You drop in and drop out of sessions at will. You can skip through the interminable story if you wish or just go straight to Adventure Mode which (blessedly) removes all the story sequences for you automatically. Level ups and gear management is a one-at-a-time process. Each player must select their equipment changes and do their levelling up in full view of everyone else. This serves an important purpose — everyone gets to weigh in on each upgrade, which is great for couch co-op. It forces the players to slow down a little bit and makes building a party synergy that much easier.

One thing that hasn’t changed is the way the game broadly handles gear and stat increases — in Diablo III there’s really only one stat you need to be pumping, and its always your primary stat. Playing a Crusader? Only take gear that pumps your strength stat and see incredible results. Playing a Necro? Pump intelligence and be amazed at how powerful they become in short order. This makes more sense on console than it does on PC. PC adherents want that crunch, they want to pore over the numbers and craft the most highly optimised character and build possible. It’s why genre competitors like Grim Dawn and Path of Exile have made such a splash in the ARPG space in recent years. On the console, all I want is for my character to be better at killing monsters and so Diablo III‘s simplified gear system works a treat. 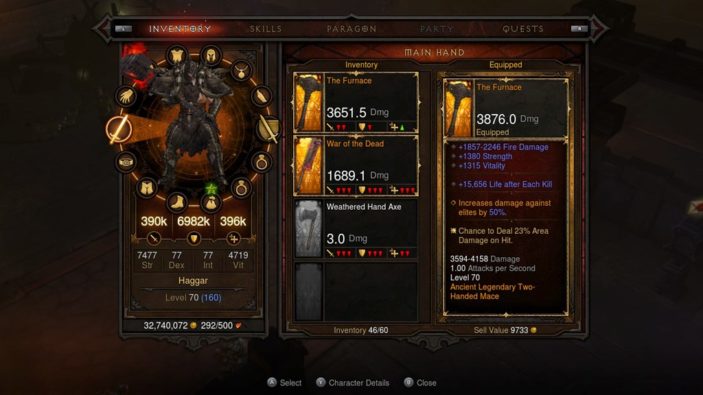 The tilt toward out-and-out action in Eternal Collection feels more in line with the game’s dopey narrative and the MMO-infused spirit of the thing. You’ll frequently end up ignoring the character prattle in order to mop up more monsters. The controller seems to suit the game better than the mouse and keyboard.The menus are reasonably easy to navigate, making gear selection and levelling up a painless process. Drop-in, drop-out multiplayer is painless on the Switch and even the online play seems to work without a hassle. The game also runs remarkably well on the Switch hardware, with no noticeable frame rate drops even with four players carving up huge mobs.

An issue with the audio in prerendered cutscenes — the game tries to force surround sound during cutscenes even when the Switch is set to stereo — meant that most of the spoken dialogue was inaudible but, as indicated, this was more of a blessing for me than anything else.

Diablo III: Eternal Collection is something pretty special. It takes a game coming up on seven years old and takes it somewhere new. It takes a game that has spent its life caught between two audiences, neither of whom wanted much to do with it, and gives it a home. As Diablo III enters its end-of-life legacy period, its hard to think of a nicer send off than that.