Games Review: Borderlands 2 VR (PSVR, 2018) is a fun and well-made romp through Pandora and beyond 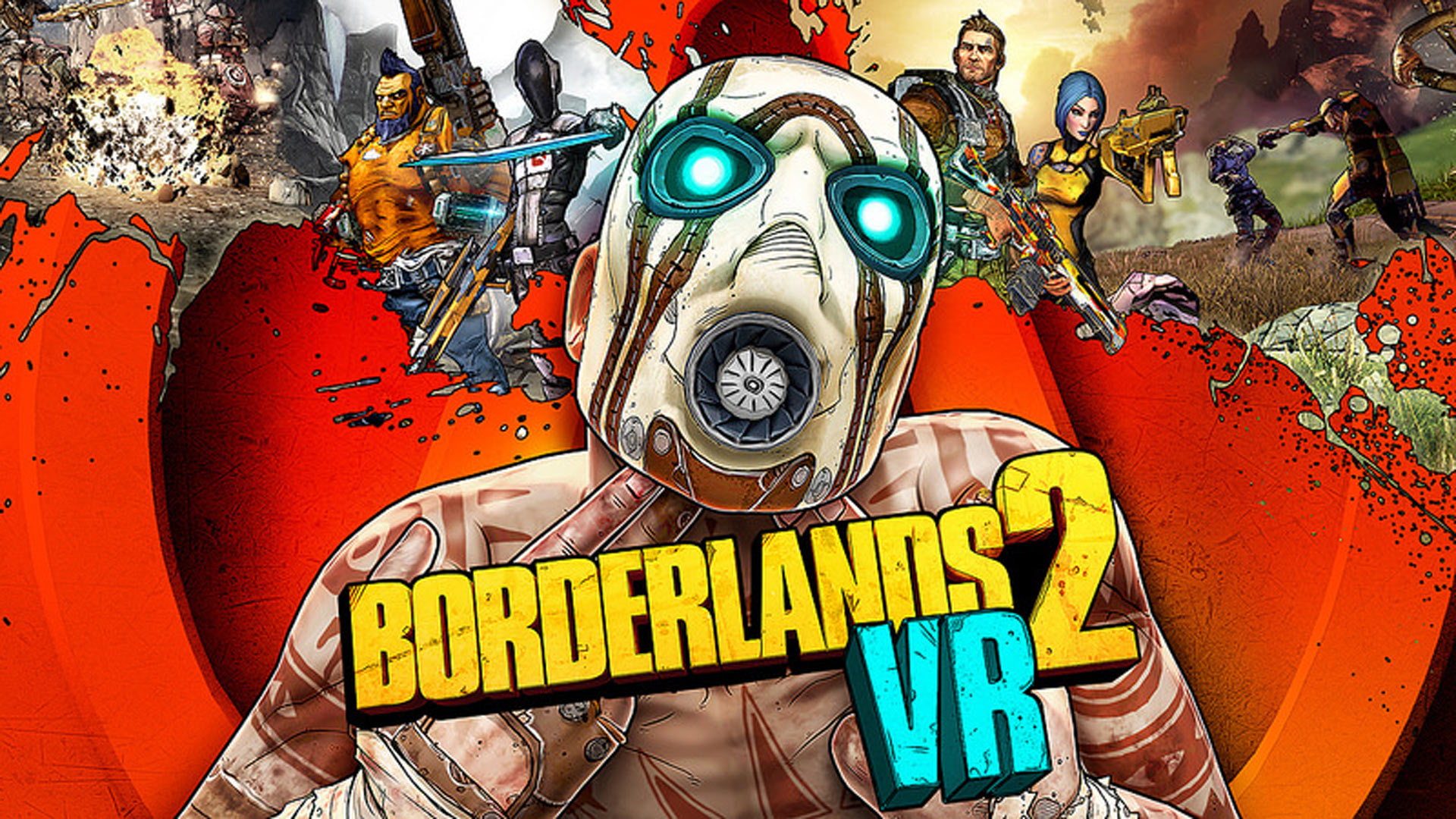 I’ve had a rocky relationship with PSVR, to put it as kindly as possible. From mild headaches and blurry vision to a nauseating journey through Skyrim, I feel like I’ve been through the wars with the device. Honestly, it’s not had that much use at all, and I was ready to give up before Borderlands 2 VR came around.

This was – by my count – my seventh playthrough of the game. I’ve played on PlayStation 3, PC, PlayStation 4 a NVIDIA Shield and even *gasp* on a PlayStation Vita. With or without friends, Borderlands 2 is just great. It’s fun, it’s colourful, the soundtrack bangs and it’s got a cast of fantastic characters to tell its globe-trotting story.

At this point, there’s scarcely a person alive who hasn’t played Borderlands 2, but as a simple recap, the facts are these. Players take on the role of their chosen vault hunter (Maya, in my case) as they traverse the locales of Pandora, shoot a lot of things, get sent in circles by confusing maps and ultimately find the legendary Vault and all its treasure.

While I could wax on about all the delights to be found in the game, this isn’t a review of Borderlands 2. For the purposes of the review, I undertook a 6-hour journey into the opening chapters of the game to test its VR capabilities and the ways that the world has been adapted. 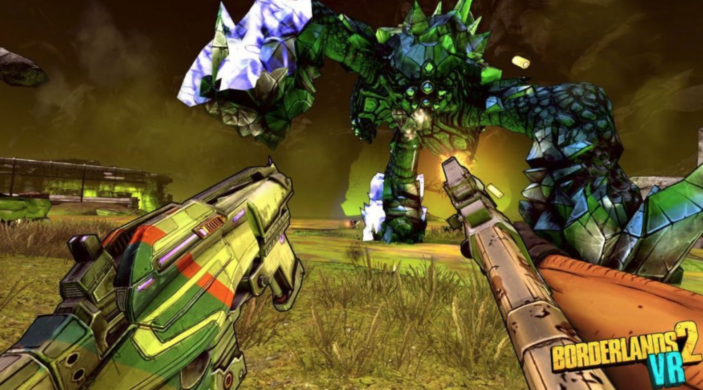 Like any VR adaptation, the world can be a little bit awkward at first. Because Borderlands 2 has always been locked into a first person perspective, the controls and look of the world remain largely the same. A wider field of view lets you see further into the distance than before, but also makes your character’s strange, floating mecha hands seem that much more weird.

This is an issue not unique to Borderlands 2 VR, but it is a prevalent one. Sometimes, my hands would roll and tumble around me with no regard for my body, although this was partially to do with a lack of calibration between the Move controllers and the PlayStation Camera.

Outside of the initial awkwardness and learning how to walk again like a baby finding its feet – Borderlands 2 VR reveals one of the smoothest VR game adaptations to date. Walking is easy and can be replaced by teleportation depending on comfort, shooting is pinpoint accurate and incredibly fun, and head tracking works well to set you on the right path. 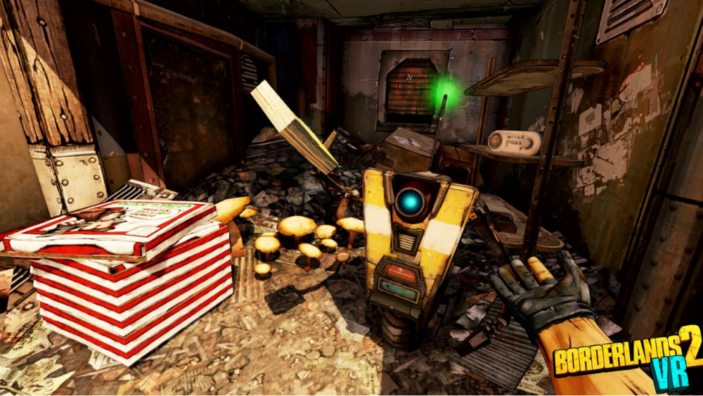 Unfortunately, you can only walk forward and getting trapped by a pack of bullymongs on a cliff can be a frantic and frustrating experience. The introduction of a new bullet time ability, BAMF, helps with this somewhat, but doesn’t make up for the clunkiness of moving backwards.

Mostly, I found this play style suited me because I tend towards using longer ranged guns and staying out of the action. When the action came to me, the new melee settings, which allow you to physically hit outwards with the Move controls, served me well.

The landscapes of Borderlands 2 are well presented in this iteration, even limited by the middling output of the PSVR headset. The cel shaded graphics work well, and because the game doesn’t even attempt realism, travelling through the world doesn’t feel jarring. Instead, it’s a satisfying and well-made romp through one of the coolest worlds in gaming. 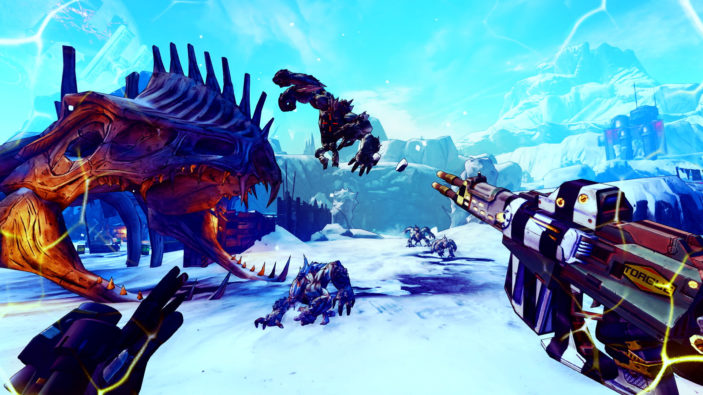 One feature that helped dramatically with my enjoyment was the inclusion of varied comfort settings. Everything about the gameplay is customisable, from the buttons you use to shoot to your height level in the game, how you walk and most important – how much of the world you can see.

For those of you who’ve had issues in the past with VR, Borderlands 2 VR allows you to adjust or remove blinders to limit the scope of your view. Unlike Skyrim, the blinders don’t constantly adjust, and can be removed entirely for your viewing pleasure. This was the feature I appreciated most because it was one I felt Skyrim needed to fix the most.

All of these features combine to create what is a perfectly enjoyable and well-adapted rendition of Borderlands 2. While one could argue that the game wasn’t entirely necessary, I rather feel like I’m enjoying the game too much to care.

Reviewed on PSVR powered by a PlayStation 4 Pro with a retail code provided by the publisher.