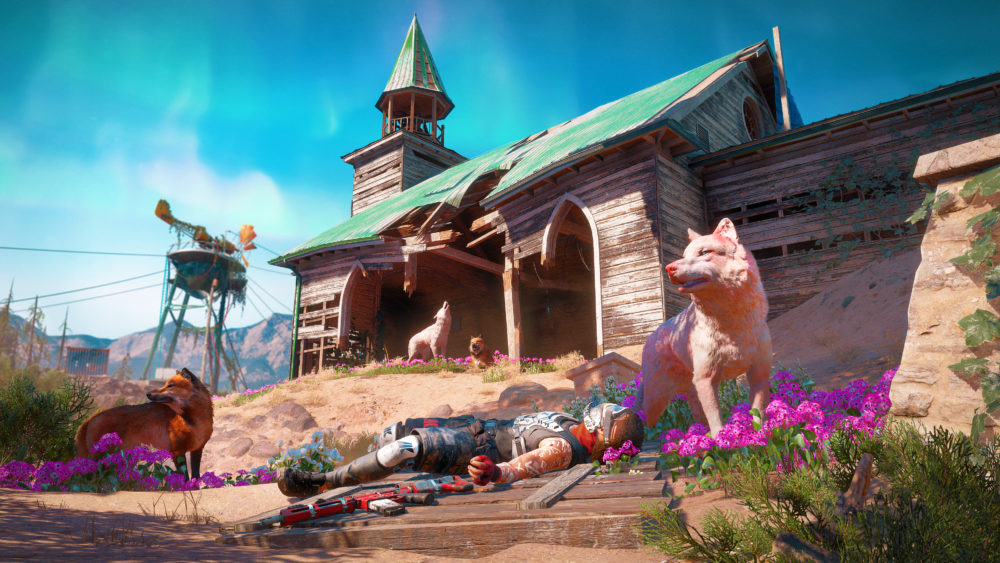 I’d been playing Far Cry New Dawn for about an hour when a dusty neuron in the back of my brain began to fire, two thoughts connecting in real time. New Dawn is a spin-off title in the Far Cry series, but is a direct sequel to 2018’s Far Cry 5. The cynical view of its production and release is as easy as it is ultimately reductive — Ubisoft found a way to recycle last year’s assets and package it as a brand new game. As AAA production budgets go, the bean counters must be delighted. By Grabthar’s hammer, what a savings.

The memory causing that dusty neuron to fire in the first place was this: in 2016, Ubi were roundly criticised for re-using the world map from Far Cry 4 as the basis for that year’s spin-off title, Far Cry Primal. Perhaps working under the assumption they could get away with it, Ubi never mentioned the recycled map nor gave any indication that their (otherwise extremely good) caveman simulator had a connection to Far Cry 4 (because, to them, it didn’t). In Far Cry New Dawn, Ubi are embracing their thriftiness and putting it on front street for all to see — not only are they re-using assets from last year’s game, they’re remixing those assets, sending players to familiar locations altered in surprising ways. 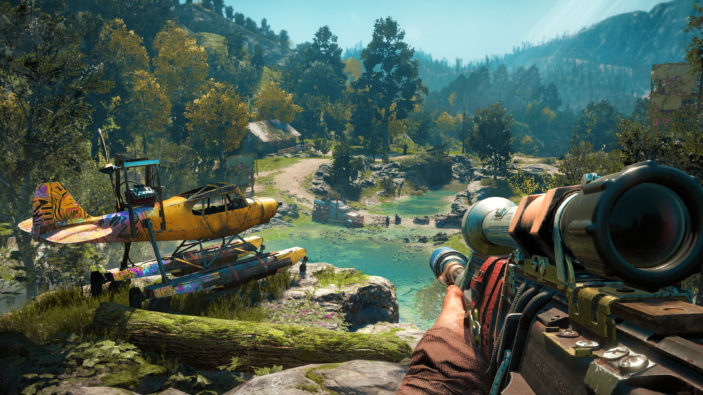 The game also represents a bit of a narrative power move. Far Cry 5‘s conclusion was a divisive one and left many players feeling as though they’d had the rug pulled out from under them. As the villainous Joseph Seed smirked directly into the camera, a nuclear warhead rising into the air behind him, it was hard not to wonder why you’d worked so hard to save Hope County if it was always going to be rendered meaningless at the last second.

New Dawn takes that bitter pill and turns it into an opportunity, grounding the series in an entirely new setting.

It’s been 17 years since Joseph Seed went nuclear. The Hope County players got to know so well in Far Cry 5 has been radically altered by the destruction. It has endured a nuclear winter and emerged on the other side in a state of renewal. In the midst of a real-world phenomena called a Superbloom, the former Hope County is now home to a settlement called Prosperity, a place where survivors and newcomers alike have built as a bulwark against roving Highwaymen gangs led by despotic twin sisters Mickey and Lou. I saw a few familiar faces returning from Far Cry 5, but the bulk of the cast is made up of people who have never known a world any different from the one New Dawn presents. This allows Ubisoft to have some fun with the setting, painting buildings in garish colours and crafting ad-hoc weapon accessories from empty cans, elastic bands and  grim determination. 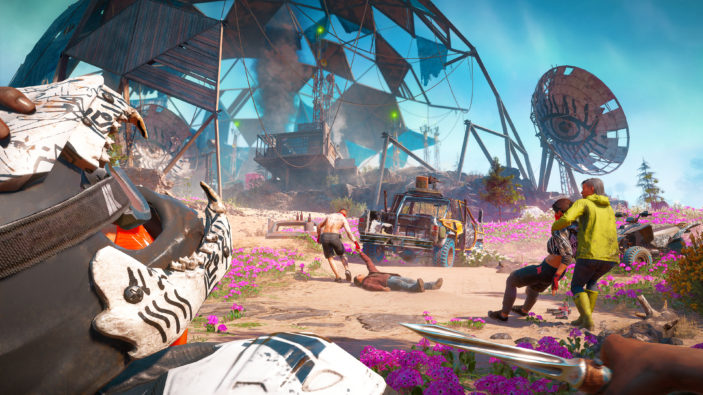 Our New Dawn preview included only a few alterations to the established formula. The most notable for me was Escalations, the ability to relinquish your hold on captured outposts, returning them to enemy. Doing so raises the outpost’s three-tiered star rating, ratching the difficulty and allowing you to tackle them again, resulting in greater resource hauls for success. I’ve long grumbled about the enemies in Far Cry being bafflingly chill about you clearing out their bases and it’s great to see Ubi addressing this little incongruence at last.

Escalations are a part of the game’s new “light RPG” approach to progression. On the surface, this resembles lovely big damage numbers erupting out of enemies as you shoot them like its Destiny or Borderlands. As you start to pick at it, you’ll find that a great number of things have been made upgradeable. Weapons, vehicles, even Prosperity itself can be upgraded with the materials you scavenge from the wasteland in exchange for new gear, perks, missions and more. 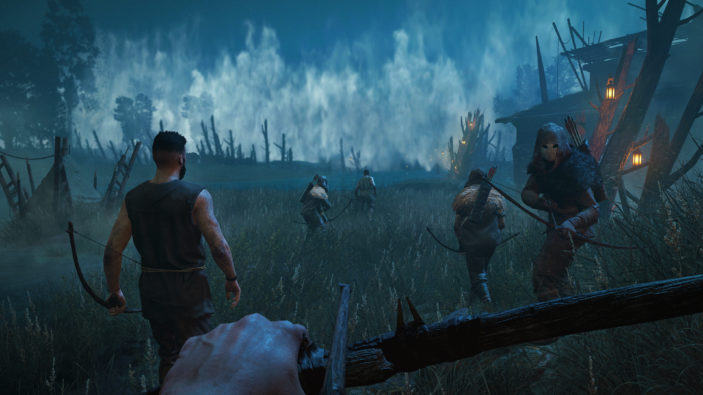 The other new feature is Expeditions. These are missions that take place away from Hope-County-that-was and are actually dotted all around the ruined, post-apocalyptic USA. They are functionally infiltration missions — get into some heavily guarded structure, compound or zone and extract a precious supply cache. Get the supply cache to a safe distance and meet your helicopter pilot friend for extraction. These missions can be attempted solo, but have certainly been built with co-operative play in mind. It was definitely fun taking apart a beached aircraft carrier with a friend, but the reward was quite a bit sweeter when I pulled the heist off on my own.

Beyond this, the game very much felt like Far Cry as we know it. My three hour session saw me thrashing welded-together cars off-road, scouting outposts with my binoculars and figuring out exactly what I’d need to quickly unlock the bow. The series has always been at its best when it gets out of your way and lets you indulge your most ridiculous desires. In New Dawn‘s post apocalyptic setting, this kind of maniacal behaviour not only makes sense, it is wholly expected. The new saw launcher weapon should be evidence enough of that all by itself.

Far Cry New Dawn doesn’t feel like it’s looking to reinvent the wheel any more than Far Cry 5 was, but that doesn’t mean it isn’t willing to try a few new things. As a title outside the mainline franchise, it’s ideally suited to minor experimentation, and it feels like that’s exactly what Ubi’s doing here. For long-time fans, it promises more of what you know and love.

The author was flown to Sydney courtesy Ubisoft Australia for this preview. Far Cry New Dawn launches February 15, 2019 on PlayStation 4, Xbox One and Windows PC.