Games Preview: Assassin’s Creed Odyssey feels like the series is ready to perform its own leap of faith

If Assassin’s Creed Origins was to be the new franchise blueprint, Assassin’s Creed Odyssey feels like series with its mission statement clarified. It stands on the edge of a big leap, the way one of its protagonists might. So what’s it waiting for? Its release date, probably.

The build of Assassin’s Creed Odyssey I played at Ubisoft’s Sydney offices last week was a trimmed version of the early game, allowing us to choose between main characters Alexios and Kassandra and begin their story. The good news for those who suffer from video game FOMO is that, as far as I could tell, the story didn’t change a jot based on the character I chose. Even their dialogue stayed the same. So, it seems you can relax — you’re not going to miss out on anything by picking one over the other.

The game’s map, much which we couldn’t visit in our preview build, was expansive. The game appears to be taking the term “odyssey” very seriously, dropping you into the middle of the Greek islands and letting you sail between them. Our adventure began on Kephallonia, a rural fishing island, where my character (I chose Kassandra) lives in apparently relative squalor and is quite happy with this arrangement, until a debt collector’s goons come to call. 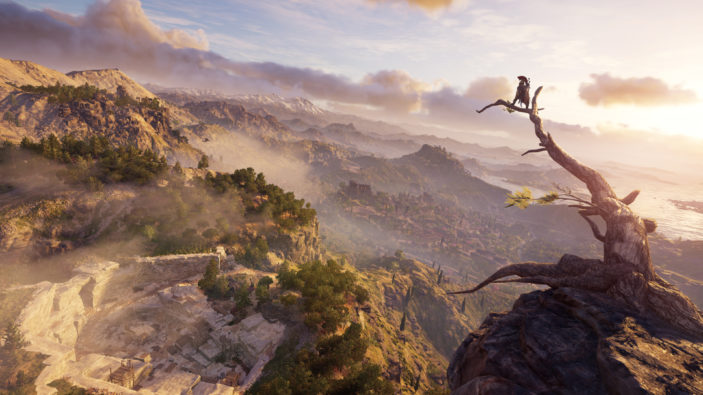 This is about as far as I’m going to go into spoiler territory, partly because I don’t want to ruin it for you, and partly because there is a lot about the many early story beats I saw that I’m not allowed to talk about.

The six hours I had with the game took me all over Kephallonia. We were encouraged to play the game in what Ubi are calling Exploration Mode, which removes a lot of the UI clutter and alerts found in Guided Mode. Guided Mode is what would be considered the more ‘traditional’ way to play, with objectives clearly marked on the HUD. Switching to Exploration Mode made some of the early quests feel a bit more like a monster hunt in The Witcher 3. You have to gather as much information as you can from the quest giver, including the quest’s location, and then use your map to figure out where it will be. If somewhere is said to be “West of the Cursed Cliffs,” your best bet is the simply head over and have a look. It’s a good way to get players off the beaten path and exploring the world. A loosening of the reigns, not quite Breath of the Wild a step in the right direction. Don’t worry about getting lost — using your eagle, Ikaros, to scout large tracts of land at a glance will mark your destination in no time.

I actually quite liked this method of play. It gave me a reason to dive into the game’s newly implemented dialogue system for further information on my next target, and not having a heading that was 100% clear made a refreshing change. What was even more interesting to me was that the Ubisoft reps present made it clear that Exploration Mode is the method of play Odyssey has been built around. 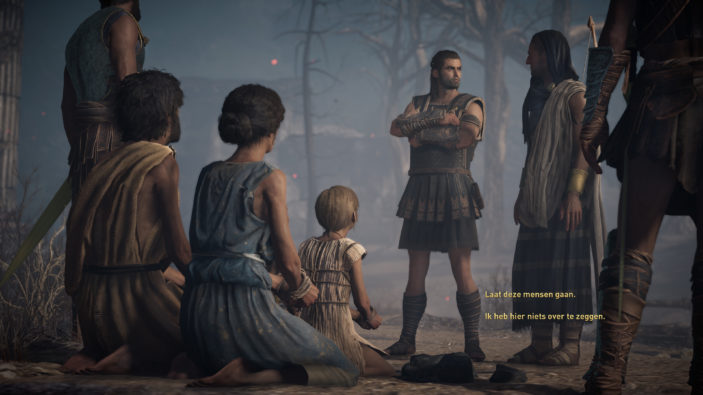 Fans who preferred Origins‘ more Dark Souls-y take on combat will be pleased to know that nothing has changed this regard. Every battle was a poke war, whittling down enemy health bars with careful footwork and equally measured attacks. My character’s movelist had changed somewhat since Origins, no longer the sprawling skill tree and more an inverted flow chart in the style of Horizon: Zero Dawn. One of the first moves I unlocked was called Spartan Kick, and it didn’t disappoint. There was likely a very particular movement conjured in your mind by the phrase “Spartan Kick” and I want you to know that, yes, it’s this one. The kick itself was good for a stun, though it can be powered up with successive skill points. I found it most useful when used in the same manner as the movie, kiting enemies onto the high ground before delivering a mule kick to their breast bone, sending them hurtling twelve stories to their deaths.

Another change was to the burn meter. In Origins, Bayek would simply fill his burn meter and pop it for a mad flurry of powerful attacks, kind of like the Supercharged abilities from Destiny. Odyssey still has a burn meter to fill, but treats it more like a fighting game would. The moves you unlock in the skill tree can be bound to L1 + Face Button or R1 + Face Button. Using one of them sacrifices a chunk of your burn meter. I feel like this is a much better way to deploy that mechanic, allowing the player to choose when to use it and when to bank it, rather than forcing them pop it and use it all at once. 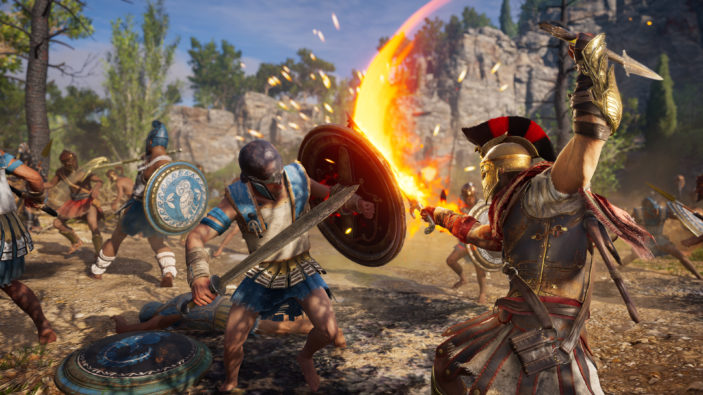 Naval combat made a return, in pretty similar form to what we saw last in Assassin’s Creed Rogue. The ships are still very nimble and have the turning circle of a Hyundai Getz, but the ship-to-ship combat is still so much fun that I’m willing to overlook how (pun intended) floaty they sometimes felt. Combat in our demo was performed through ramming, and allowing your rowers to either fire arrows or hurl javelins at the enemy. What seemed like rudimentary weaponry proved extremely deadly, sinking enemy ships in record time. We also copped a fair bit of damage in return which kept things lively.

Assassin’s Creed Odyssey is shaping up to be both an evolutionary sequel, but an important one. I look forward to spending more time with the game when we review it in full early next month. Right now, after the first six hours, I like everything I’m seeing.

Assassin’s Creed Odyssey launches October 2, 2018 on PlayStation 4, Xbox One and Windows PC. The author was flown to Sydney to take part in this preview as a guest of Ubisoft.