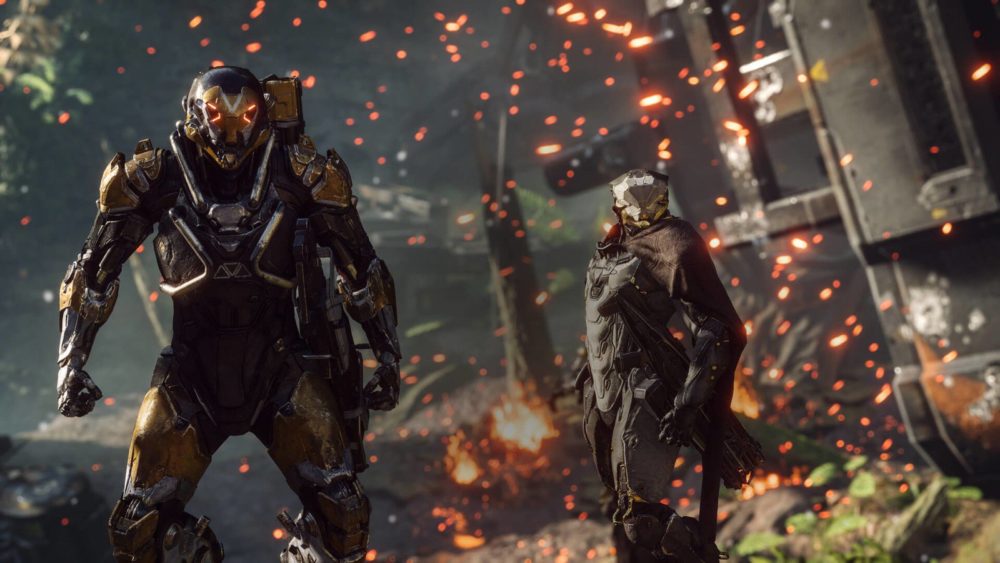 I’ve had questions about Anthem ever since it was announced. It’s been about a year and a half since Anthem was first announced and my questions are finally getting some answers.

While EA’s desire for an ongoing MMO shooter in the Destiny mould was understandable, it was the tapping of legendary RPG studio Bioware to create it that raised eyebrows throughout the industry. With Anthem‘s first true public beta now in full swing, it seems obvious why Bioware were given the job. Destiny‘s biggest creative stumbling block has always been its approach to story and character. Little about Destiny‘s lore makes sense, it’s core cast are dull and forgettable, and the dialogue is bland at best. Bioware has made a career out of being very good at all three.

The little slice of Anthem‘s world revealed in the demo is interesting and visually arresting from the off. Combining a privateer sci-fi setting, and kicking off with players living in a dusty city-commune suffused with Middle Eastern aesthetic, it works hard to create a believable, harmonious multicultural society. Bioware get to work right away, giving every speaking NPC you meet a sense of inner life. They’re adorned with headdresses and cultural markings, they have little mannerisms unique to their background and even the motion capture and facial animation are a step above Bioware’s typically lofty standard. Anyone still unhappy with Mass Effect Andromeda‘s unpolished facial tics will be thrilled to see Bioware back on their game in a big way.

What Destiny has always been great at is combat. You expect the developer behind Halo to know how to make shooting feel good, so it’s no surprise when it does. Bioware’s experience in that arena is more limited, but you wouldn’t really know it. Ever since Mass Effect 2 pivoted the franchise towards third-person action, Bioware have been quietly learning how to make shooting that feels good, as though the weapons you’re using have a certain weight and punch to them. A point generally agreed upon was that Andromeda‘s combat was its most accomplished aspect, and Bioware have parlayed this accrued knowledge into Anthem.

Combat, especially as a four-player squad, has a fizziness to it, and a big part of it comes from the four different Javelin suits that players can equip themselves with. Javelins are the Iron Man-esque suits you may have seen in the trailers, robotic exoskeletons that protect their pilot from taking too much damage and provide a suite of special powers. The four archetypes are the Ranger, straightforward Soldier type, The Colossus, a slower-paced but high damage Tank model, The Storm, a ranged Spell Caster suit and the Interceptor, a Speedy Flanker suit built for burst damage and dash-in, dash-out harassment. Gunplay still forms the backbone of your output, but is helped along by abilities specific to each Javelin. The Storm can fire off fire, ice and lightning spells for AOE or direct damage, while the Colossus deals raw damage at any range with mounted artillery and heavy cannons. Figuring out which is your specific cup of tea will be a significant component in Anthem‘s long game, and having a four-stack composed of the right models will make just about any mission feel that much more dynamic.

The big draw of the Javelins is that they allow for a full range of movement. Each suit comes with a set of boosters that allow the wearer to hover, high jump and actually fly to quickly reach locations that are either far away or simply well out of reach. The little slice of the world included in the demo shows that Bioware have very much constructed every biome around the idea that you’ll be flying everywhere because, I mean, why wouldn’t you? I conducted this hands-on on the PC and while I found that flying was a bit awkward with the keyboard and mouse, I found it to be a beautifully articulated experience the moment I plugged a controller in. It isn’t impossible to get the flying down with the keys and mouse, but its clear Bioware built the input set up with controllers in mind. Just something to file away if you plan on grabbing the PC version later.

Visually, the game is a feast, especially when running on a high-end PC. The jungle world the demo provides feels lush and truly overgrown, filled with giant chasms, lakes and hollow rock formations that are perfect for flying through at high speed. There’s a trick the game does with particle effects and lighting that is pure magic. It’ll be a 4K HDR showpiece for certain.

While Anthem defaulted to High settings across the board based on my system specs, I found that everything would slow down quite a bit whenever a fresh batch of assets would get crammed into VRAM. My PC was happy to run the game at around 90 frames until these load moments would occur, at which point the game would slow to 10 frames for around 10-15 seconds before coming good again. Not helping this along were visual effects like motion blur and chromatic aberration which, while certainly adding to the overall aesthetic, were causing to my GPU to sputter and wheeze (a surprise, given that it’s a GTX 1070 Ti). I turned these off and dropped the overall quality to Medium. The slowdown issue never reared its head again.

In terms of its overall game loop and mission structure, Anthem very much runs the Destiny playbook. The vast majority of quests were of the Go To The HUD Marker, Shoot Guys Until We Say Stop variety. This left me feeling a bit disappointed. It’s not that I mind doing these missions, it’s that I’ve done so many of them in other games. Destiny 2, The Division and Warframe all feature identical mission structures. It might be that in looter shooters like these, a simple mission structure is the best you can hope for. Instead, I hoped for more. I hoped that Bioware might be able to design their way out of that particular trope, if only to give themselves another point of difference. If they have, it wasn’t really featured in the demo. It’s not a deal breaker by any stretch but a bit of variety in the overall shape of the quest designs would have been nice.

Like I said, I had a lot of questions about Anthem. This demo, while not answering all of them, went to great pains to tick off as many as it could. Having sunk around 10 hours into this beta, it’s easy to see that Bioware have taken the challenges a game like this poses quite seriously. It’s beautiful to look at, it doesn’t sacrifice the Bioware dedication to character and world-building and it’s legitimately fun to play. The beta did the trick: in the course of two days, my level of interest in Anthem has gone from polite bewilderment to excited for more.

Don’t worry you couldn’t get a code for the VIP Demo. Anthem’s open beta will run from February 2-4 in Australia.

Anthem launches February 22, 2019 for PlayStation 4, Xbox One and Windows PC.