It’s been 15 years since the release of Pokémon Diamond and Pearl—arguably the most important entry in the Pokémon gaming franchise, as it revitalised its popularity through changes to the battle system, along with Wi-Fi connectivity and the ability to connect players to the wider Pokémon community. It was the spark for the Gen IV trailblazing that would unfold through successors Pokémon Platinum and Pokémon HeartGold and SoulSilver. For many children, these were among the first games they’d ever played, and I was no exception. So, as I booted up my Switch to the play the 2021 remake Pokémon Brilliant Diamond and Professor Rowan materialised on the screen to welcome me back to the Sinnoh Region, I couldn’t help but reminisce on times 15 years ago. 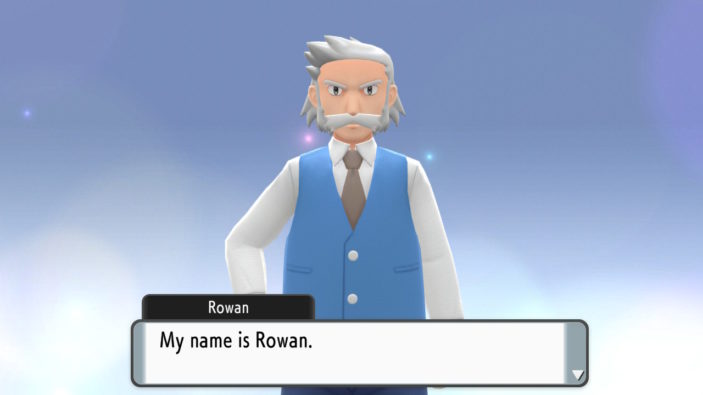 Once Upon a Diamond…

Back in 2007, when I was 10, I had a friend named Colleen, who, on every holiday and break, would stay at my family’s home. She was my only friend that played video games and on the night of Pokemon Diamond and Pearl’s release, we readied ourselves for a long night. She came over, we seized the back room, pushed the couches together and balanced cushions on top of each other to create a makeshift fortress that my parents couldn’t breach. We stocked up on sweets and Smiths chips, believing we could last days on that alone, and fed our chargers through holes in our fortress to connect to our Nintendo DS’s—all in preparation for bunkering down and playing Pokémon Diamond.

Clicking open our DS’s, we started in the small Twinleaf Town of the Sinnoh region. We were excited to jump into our Pokémon catching adventure, however, the town set up a polar opposite pace that slowly introduced you to the story, world and battle system. We met our annoying best friend who would challenge us after every gym battle and our more important starter Pokémon that would follow us on our journey. Our choice consisted of a fire-, water- or grass-type Pokémon, but my decision was easy because my Pokémon team would only consist of the cutest and that was clearly Turtwig. 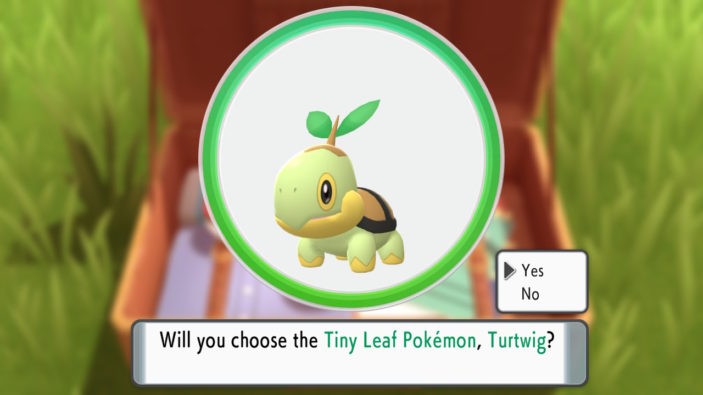 The Sinnoh Pokédex has 151 Pokémon to see and catch, but with cuteness as my top priority I quickly ignored any fighting-, ground- and rock-type Pokémon (to my future detriment). My cute-only rule was rewarded in Heatherhome City with the Super Contests and Amity Square, where you can take your Pokémon for walks outside of their Poké Balls. Better yet, in the remake, your Pokémon can follow you around the map, albeit they can never keep up with you and instead get stuck behind trees, walls and rocks. Unsurprisingly, my team as an adult mirrored the cute-only sentiment by catching a Shinx, Psyduck and Buneary early on. Unfortunately, the Sinnoh Pokédex is severely imbalanced. There are only two fire-type Pokémon to catch and one of them is the starter Pokémon. In Pokémon Brilliant Diamond this imbalance isn’t addressed either and instead, there are too many Bidoofs, Geodudes and Zubats clogging your wild Pokémon battles. 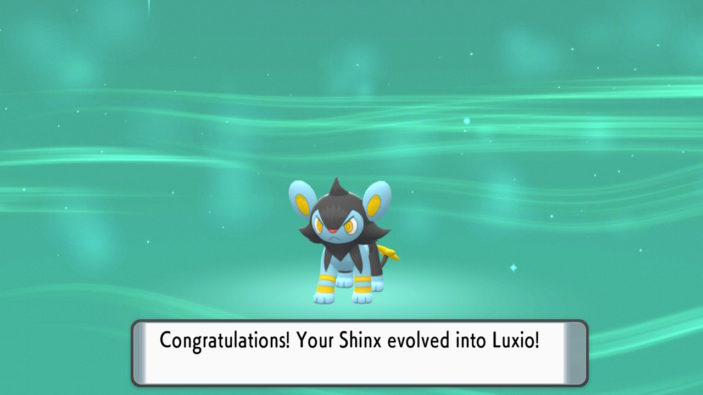 Like with all kids, playing Pokémon Diamond was made into a competition. A race to the Elite Four. However, unbeknownst to us at that the time, Pokémon Diamond is a long game, and its remake is no different. Unlike newer Pokémon entries that incorporate open-world exploration, Pokémon Brilliant Diamond takes you back to linear gameplay. Your budding Pokémon trainer travels from town to town with a pre-scripted path to fight Gym Leaders and the supposedly menacing (albeit laughable) antagonists: Team Galactic. This linear structure ultimately means there are limited ways to progress throughout the game, which is enforced by softly guided exploration.

While rushing through to complete the game as a kid, the soft blocking proved a difficult challenge by me skipping dialogue and forgetting to check my map. More times than once Colleen and I were lost in Mt. Coronet trying to find the summit or we missed an integral hidden move because we sped past the Great Marsh or a Team Galactic Warehouse. Even worse were the formidable Psyducks blocking our path for hours while we wrangled our heads over how to get past them. Or the Team Galactic Grunt idly standing in Pastoria City that we didn’t know to speak to. As an adult, the soft blocking proved easier by me listening to directions and I actually found myself liking the linear guidance because it clearly directed both the overall story and my personal progression in the game. 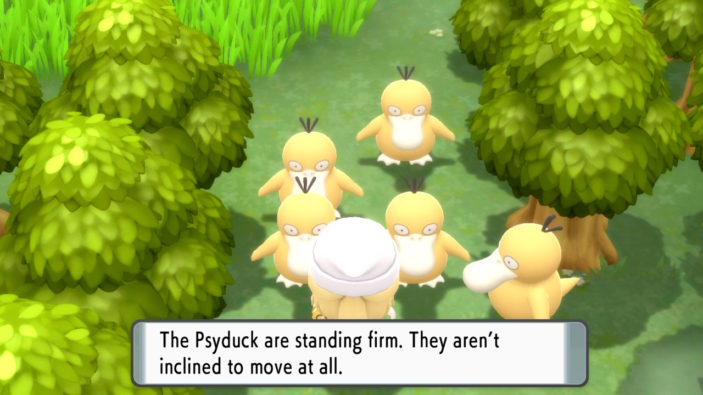 The End of the Line

Inevitably, there came a point in our Pokémon adventure where we realised that we couldn’t finish the game in one night. Due to random difficulty spikes and sluggish pacing, our race became a two-week endeavour that, to kids, felt like a lifetime. Notably, the third gym is nightmare fuel in the form of a level 30 Lucario with Drain Punch. Considering the rest of the battles in the gym, and the next gym to follow, are a walk in the park, getting your team wiped by a one-shot kill Drain Punch was frustrating and out of place. Pokémon Brilliant Diamond is plagued with difficulty spikes that are counter-intuitive to your progression in the game. For example, you’ll be forced to grind for a particular battle or gym leader, only to find yourself over-powered for the next couple of hours. 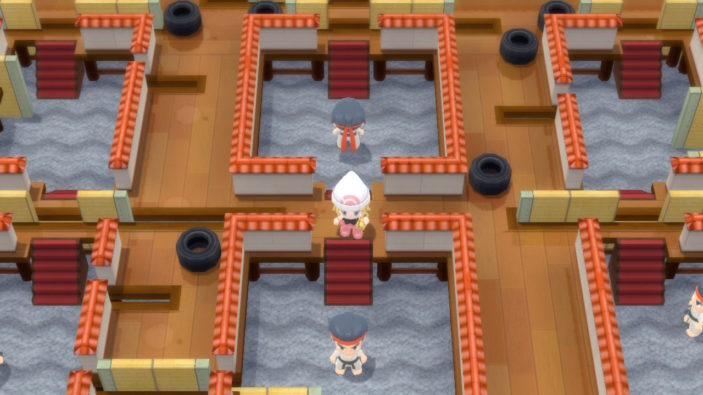 The most frustrating perhaps was the grind to the Elite Four. After over a week of hiding in our fortress, my Dad broke through our defences and confiscated our DS’s so we could get some much-needed sunlight. It was during that siege we were attempting to level our low level 50’s Pokémon to high 60’s in Victory Road because taking on the Elite Four under-leveled was a doomed endeavour. After simmering in the sun with fresh minds, we continued our two-day grind to preparedness. Unfortunately, late-game Pokémon Brilliant Diamond struggles to make levelling interesting. By that point, you’d have battled most Pokémon trainers once or twice and there is no Pokémon Gyms to re-test your mettle before defeating the Elite Four, which leaves you to fight wild Pokémon again and again.

The further problematic feature of the remake (and original game) is the pacing of the underlying plot with Team Galactic. The lore of the Sinnoh Region is brimming with interesting mythology, but the process of unravelling it is locked behind many, many Team Galactic battles. You’ll take on three Team Galactic Commanders three times, with too many Galactic Grunts to count in between them. Admittedly, I didn’t notice the pacing issues as a kid, but I found I wanted it to be overplaying the remake. It didn’t help that the Team Galactic battles showcased the same Pokémon repeatedly, which meant I could mind-numbingly choose their counters without any issue. 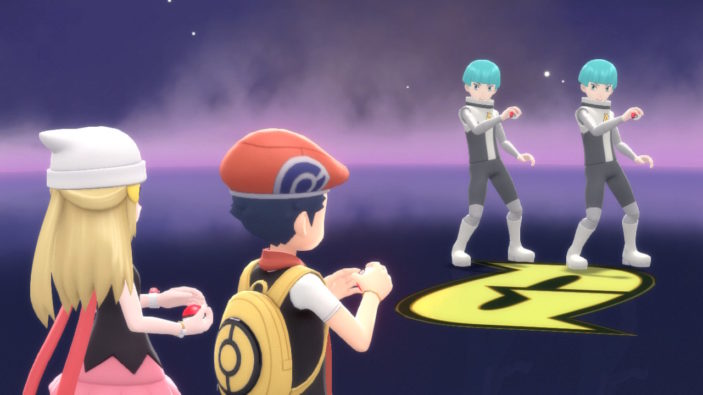 Finally, the main divergence from the original game stems from its graphical upgrades. Taking on a smoothed out 2.5D environment, Pokémon Brilliant Diamond finds itself buddying up close to the original 32-bit character design and incorporating the lusher and more realistic environmental design of the newer Pokémon games. Whereas a kid, the serious late-game moments were complimented by the pixel design and ominous chiptune soundtrack, I found myself laughing as an adult at the hilarious huge-headed characters with pasted on facial expressions. The intensity and seriousness of the narrative are lost in translation as a result of the child-friendly art style. 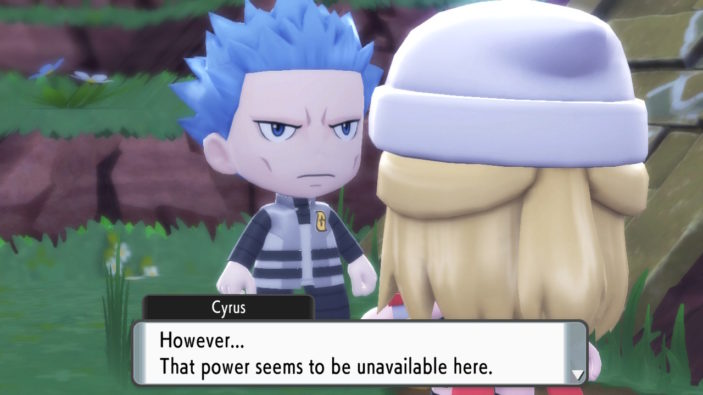 Pokémon Brilliant Diamond allowed me to remember fond moments lost to my memory that, at the time, seemed insignificant. After Colleen and I beat the Elite Four and caught the Pokémon we missed, our childish attention moved us on to the next shiny interest, but the remake captured that enthusiasm once again. Despite the obvious pacing issues and lacklustre graphics, Pokémon Brilliant Diamond is a great homage to earlier linear generations of Pokémon games.

Chantelle McColl is a writer based in Melbourne, Narrm, who specialises in video games and analysing how they convey memorable narratives and experiences. Dabbling in indie genres like Platformers, Metroidvanias and all games story-rich, Chantelle is always on the lookout for the next experimental game. You can find her work on ScreenHub Australia, Byteside, Checkpoint Gaming, Explosion Network and on Twitter.