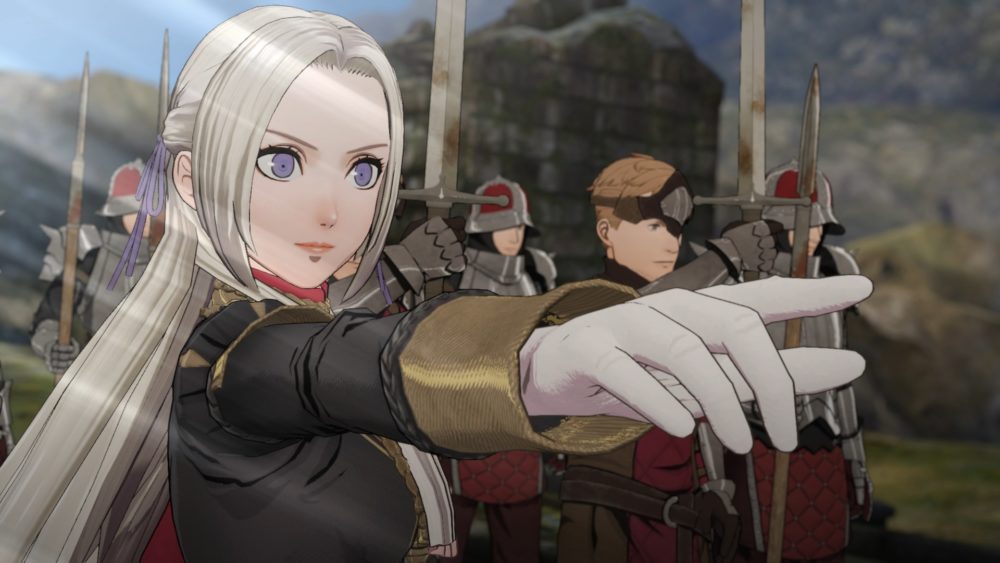 Fire Emblem: Three Houses is made up of so many narrative and mechanical moving parts that it feels like it should be collapsing under its own weight. Instead, like one of its steely tactical field commanders, it never wavers in its vision or its confidence in itself.

A far cry from the Fire Emblem games of old, purely tactical titles with a story that threaded each mission together, Three Houses is the endpoint of a decade-long franchise evolution. It dives deeper into the RPG space than any previous series entry, works harder to present the player with chractesr that feel compete and human, and it pushes the series’ turn-based strategy heart in challenging new directions, with each system folding neatly into the others.

The story is a years-long military drama set on the continent of Fódlan. It begins in a school for strategically minded nobles (itself divided into the three houses from which the game takes its name) and descends into all-out warfare between three factions, former allies driven apart. It features some of the strongest narrative work I’ve ever seen in a strategy title, making for a perfect dramatic set up.

To explain why, I’ll invoke another popular turn-based strategy title, XCOM. In XCOM, the player becomes attached to their individual units over the course of many battles together. It’s the shared experience of surviving tough scrapes that bonds you with each unit, and you feel the pain of regret when they die in battle. You feel it despite there being no greater story to them beyond their name and their role. They’re procedurally generated by the computer. There wasn’t any material written for them but what you’ve come up with in your head.

In Three Houses, your character Byleth is made the head of one of the Garegg Mach monastery’s three school houses, The Black Eagles, Blue Lions or Golden Deer. Each house is representative of Fódlan’s three nation-states — the Adrestian Empire controls the south west, the Holy Kingdom of Faerghus leads the north, and the Leicester Alliance rules in the east — and are comprised exclusively of students from each respective nation. Your job as their leader and professor, is to get to know each of your students and discover their hidden talents, foster their interests and turn them into perfect, multi-faceted military combatants. As you get to know students from other houses, it’s possible they will become interested in joining yours, allowing you to slowly poach and grow a crack squad of the academic elite. The whole time you are doing this, Three Houses is slowly positioning a dagger above your heart.

Unlike XCOM, individual units in Fire Emblem‘s turn-based battles are not randoms generated by the computer. They are your students. When you make a bad call in the heat of battle and it gets them killed, you feel a piece of your soul break off. Because that wasn’t just a unit of mages, that was Dorothea. She came from a commoner family and while she was good at fire magic, she’d also shown an aptitude as a pikewoman. She was friendly, well-liked and a dedicated student. She liked dumb jokes and she hated spicy food. She worried that her heritage as a commoner would hold her back if her classmates found out, but was the first one to stand up for any of them in a fight.

But now she’s dead, and that’s on you.

Each of your students are fully fledged characters, people you’ve gotten to know over many hours of play. They have relationships of their own, ideas and aspirations, likes and dislikes. They have real interiority and it makes losing of any of them heartwrenching. Having the lives of people you know and care about in your hands raises the stakes of every battle dramatically. It makes you work that much harder on your tactics because failure is disastrous.

If all this is sounding a bit too stressful for you, don’t worry, there are a couple of ways to allieviate it. The first is that you can play on the Casual difficulty setting which will, during combat, simply send any defeated troops back back to the monastary rather than killing them permanently, which is how Classic difficulty operates. The second is a rewind mechanic baked into the overall story. Byleth is repeatedly beset by a mysterious, green-haired girl who seems to live within a pocket dimension all her own. This girl holds the Divine Pulse ability, the power to rewind time up to three times per battle and undo costly mistakes. Depending on the battle, Divine Pulse could be the thing that seals your victory, but I daresay that it may be too powerful. Let’s say you misclick and move a unit to an undesirable or unintended location, leaving them vulnerable. Invoke the rewind and take yourself back a single turn. I see absolutely no problem with this. It’s cool, wind it back, no harm no foul. It’s when the mechanic allows you to wind the battle back to Turn Two that things get a little squishy in my opinion. Taking it back that far is great if you realise too late that you’ve run with a totally unfeasible strategy and would prefer to start over but, unless you’ve really cooked things, its basically a Get Out Of Jail Free card. Used sparingly, I think Divine Pulse is fine, but I wouldn’t want to become too reliant on it. It’s sad to see Three Houses do so much to leverage the character drama only to potentially undercut it with a mechanic like this.

Battles play out in the traditional isometric layout, allowing the player to get a view of the surrounding battlefield. Cover or advantageous ground can be found in various environmental objects like shrubs or hills, making positioning a key component in any winning strategy. Every edge you can get is worthwhile because the AI, particularly on Classic difficulty, is no slouch. Should any one of your troops be left vulnerable at the end of your turn, they will be instantly pounced upon by the computer. Luckily, one of the game’s new readability adds is a red line indicating any character that will come under fire should you move them into particular positions. This is useful for two reasons — it helps you keep squishier units out of harm’s way and it lets you see just how many enemy units you can bait with a single tank, all before you commit to anything.

When you aren’t in a battle, the game switches to a short third person adventure mode. The early game has you exploring the monastary piece by piece, getting to know your students, working out where they like to spend their time and completing timed side quests in exchange for experience and useful items. It’s in these moments that it’s easy to see the extent to which modern Fire Emblem has been influenced by JRPG’s like Persona 5. Both games delight in the downtime, the slice-of-life mundanity of the daily schedule. Three Houses even runs on the same monthly calendar as Persona 5. You’ll be reminded of students birthdays and special events, and you’ll run classes during the week. Pitched battles loom, a blot on the calendar, beginning at weeks away but creeping ever closer. Your weekends are filled with side quests and getting-to-know-you activities.

The rewards for this are substantial. You can guide your students academic path by enforcing certain lesson plans or responding to their questions in specific ways. This connects back to combat in the sense that the classic rock-paper-scissors school of unit design has been radically altered. While certain truisms still hold — swordsmen are weak against spearmen, who are weak against archers, who are weak against swordsmen — you are better able to leverage them for an advantage by giving your students a back up discipline, be it a weapon speciality, gearing them for a specific role like healing or tanking, or simply giving them the ability to change weapons when the situation the battlefield changes abruptly.

This review has  barely scratched the surface of what Fire Emblem: Three Houses has to offer new and returning players both on and off the battlefield. We haven’t covered teacher levels, battalions, gambits, crafting … there’s so much content here. I am at least forty hours into the  campaign and if anything, the stakes only seem to rise. It’s a mark of just how robust the series really is that it can experiment as it has and still find such rousing success. It updates its core mechanics in ways that improve the entire experience, and it goes all in on a sweeping story of friendship, betrayal and the value of restraint in a time of war. For me, it’s in my top five for Game of the Year without a doubt. For anyone with a love of strategy or JRPG’s in general, Fire Emblem: Three Houses is an essential purchase.

Highlights: Sweeping story; Chin-scratching tactics; Gorgeous art; Smart innovations on a strong formula
Lowlights: I am unable to play it 8 hours a day because I’m an adult with so many other things to do
Developer: Intelligent Systems
Publisher: Nintendo
Platforms: Nintendo Switch
Available: Now

Review conducted on Nintendo Switch using a pre-release code provided by the publisher.