With this current generation of consoles coming to a close, you would be hard-pressed to find a platform with as many consistent, quality exclusive titles. But the Playstation 4 proves unready to buck this trend, with developer Pixelopus releasing one of the most visually gorgeous and prolific experiences of its kind. Concrete Genie does a bunch of things right. Whether it’s the gorgeous and varied colour palette, or the charming art style, everything seems to mould together to create a largely engaging single-player journey that’s as therapeutic as it is captivating. Although it runs a little short, Concrete Genie is nothing short of memorable.

The first thing you’ll latch onto in Concrete Genie is it’s art style. It felt unique yet oh so familiar, as if every exclusive platformer of the past decade had melded its existence. Parts Sly Racoon in its open world traversal and parts Ratchet and Clank in its collect-a-thon style of play, Concrete Genie felt inspired yet original in delivering a proven formula in a new, and gorgeous, paint job. Concrete Genie puts players in the shoes of Ash, a young artist growing up in Denska, a small coastal town ravaged by the effects of an off-shore oil spill, now on the brink of collapse. With art Ash’s only escape from Denska, bullies prove to make his hobby no easy task, as his trusty journal is destroyed, the pages scattered all throughout the town. Ash sets out to retrieve these pages, as he soon stumbles across a magical paint brush, which helps him bring his creations to life, covering Denska with enough colour for Google Earth to pick it up from space. Concrete Genie’s story is simple enough for players to follow, but paced well enough In turn to keep the player moving and motivated until the very end. Ash isn’t a mind-blowing character by any means, but you can sympathise enough with him to aid him on his quest, as short as it may be, clocking in at around 6 hours. 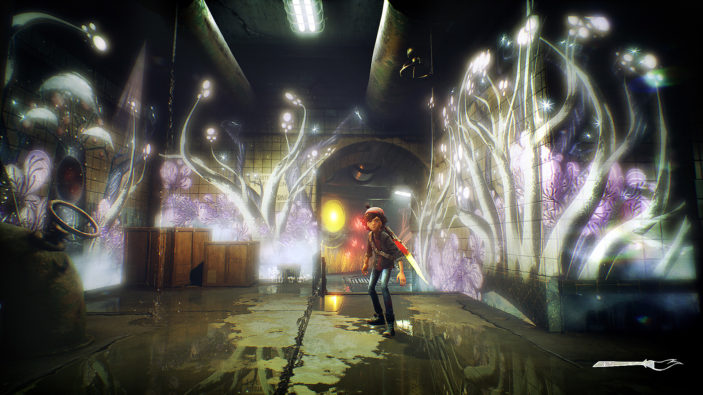 Gameplay only follows in the colourful and charming footsteps created by its story. But here is where things get interesting. I won’t lie when I say my eyes rolled when I saw that Concrete Genie utilises SIXAXIS technology. In order to paint the town with your oversized paintbrush, players must lock onto a wall, slightly tilting the controller while holding the R2 button to begin painting. Coming to grips with the subtle gestures required to successfully paint are wall is felt strange at first, but I soon fell in love with this mechanic as something that felt natural enough without feeling forced or overused by the end. Your variety of creations can also be extended with consistent findings of journal pages, unlocking new designs for environments and genies. Genies act as companions of sorts all throughout Denska, as you create their likeness on the walls with certain abilities in mind, helping out in solving environmental puzzles. One of the earliest genies you’ll acquire comes in the form of the red genie, who can help you set fire to certain items blocking your path. The two remaining genie types come in the form of a yellow genie who can help power up electrical items, while blue genies can blow certain objects across environments for your to access. Each genie adds a subtle yet engaging level of versatility to the experience as you can create them in any way you see fit; moulding their bodies and attaching various limbs and features before bringing them to life with the touch of a button, which never ceases to charm. They also grant you with Super Paint, a special paint that comes in limited supply, helping you clear out sections of the darkness, a purple infectious paint that stains the walls, preventing your genie from progressing. Puzzle solving blends beautifully with the the freedom to create various murals on each wall. While you can really scatter anything across each environment in order to meet the objective requirements, I found that as each creation stuck around until the very end, your effort is only rewarded, as Denska looks amazing with a little bit of elbow grease. It was truly a joy to cover this town.

Concrete Genie’s gameplay mechanics don’t end here however; while traversal can be defined to the jump button, stealth and combat play a major role in navigating Denska. Ash must sneak around to avoid the numerous bullies that lurk throughout the town, distracting them by yelling and forcing them away from your route. Combat however plays a slightly larger role, as your paintbrush soon becomes a weapon that can be used to ward off foes. It does change the tone of the game later into the experience, as you tune your genie’s powers to do damage to an enemy instead of their usual purpose. It’s not bad in small bursts, but I found enemies had such large health bars, making encounters drag on a little longer than they should. Rounding out the experience however, is a cool little mechanic that allows you to use your paintbrush as a skateboard. It’s really as simple as that; it’s super smooth and therefore super satisfying, as running can prove to be a little sluggish after a while, as you explore some of the game’s larger areas. 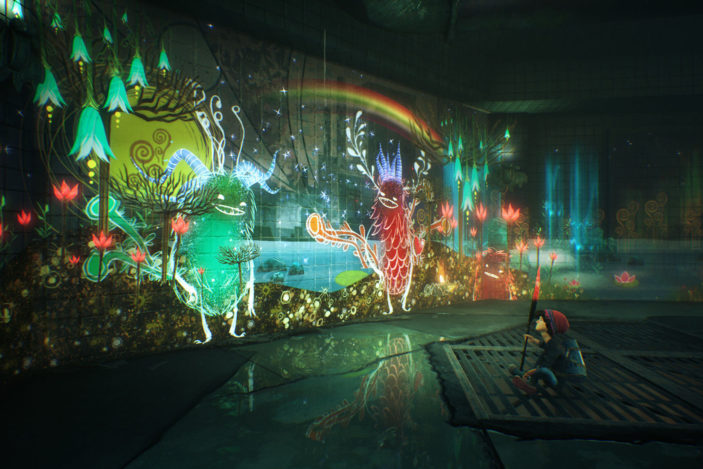 Concrete Genie also adds a VR mode in a bid to extend the life of the experience, and while I only got a short look at it, I feel as though it holds it’s own weight, but wears even thinner than its campaign. Players are given the first person treatment as they litter environments with creations that seem to be more reactive than those in the campaign. Trees grow with more detail, the sky can be manipulated in any way you see fit, as there’s simply much more of the environment you can control with your designs. However, the experience wears thin simply because it’s not tied into the story , and therefore dependant on how motivated you are to create and explore these choices. However, players can always return to Denska in a bid to collect all designs and light up the town to its fullest potential.

Concrete Genie isn’t perfect, but a game of this size and scope doesn’t need to be. It’s short, but given its simplicity, it doesn’t overstay it’s welcome, encouraging creativity only if you choose to do so. Throughout its 6 hour runtime, Concrete Genie oozes charm and confidence through its gorgeous art style and accessible mechanics. The story won’t break any new ground, but paves the way for a healthy sense of ambition, as your creations propel the story forward in meaningful ways. The VR mode might wear a tad thin, but it does little to impact the magic the Concrete Genie delivers on the whole.