You spawn on an open battlefield, side by side with your teammates. As you are given a rousing speech, the match begins. You burst out, sprinting with all your might, letting out an outrageously wonky and exaggerated battlecry, as you hurdle towards the opposing faction. Sword and shield in hand, you crash into a wall of bodies and a flurry of attacks. Beheadings, dismemberments and screams ensue, as you pick out your first foe. You lock eyes, and square up; This is Chivalry 2.

In many ways, Chivalry 2 boils down to these singular moments. Throughout each of its modes, mechanics and classes, is a nuanced and balanced combat system that introduces players to some of the most hilariously fun medieval combat out there. While it can be a little rough around the edges and shallow in terms of its multiplayer-centric modes, a lot can be forgiven when the moment to moment gameplay is this satisfying.

No Guts, No Glory

After a brief single player tutorial outlining basic controls and combat mechanics, you are thrust into large 64 or 40 player battles, spanning multiple maps and modes. Set during a time of war between two powerful factions, the Mason Order and the Agatha Knights, you’ll pick a side and run face first into large groups of screaming men. Yeah, I get how that sounds, but given the lack of a single player narrative and overarching lore, it’s incredibly engaging. That being said, the fact that Chivalry 2 relies so heavily on its online component, forces you into a harsh world and community that is determined by the skill of opposing players.

It’s nothing new, but the inclusion of a narrative or single player portion would have done such a great job at introducing you to both the world and opposing factions, given the small amount of lore that is presented to you, which seems like a missed opportunity in highlighting some of the incredibly tense and admittedly cinematic moments that lie within multiplayer matches. It’s not necessarily a bad thing, as both 64 and 40 player segments contain a wide selection of modes and matches. It’s just disappointing that it does little to ease you into its world aside from an engaging yet simplistic tutorial. 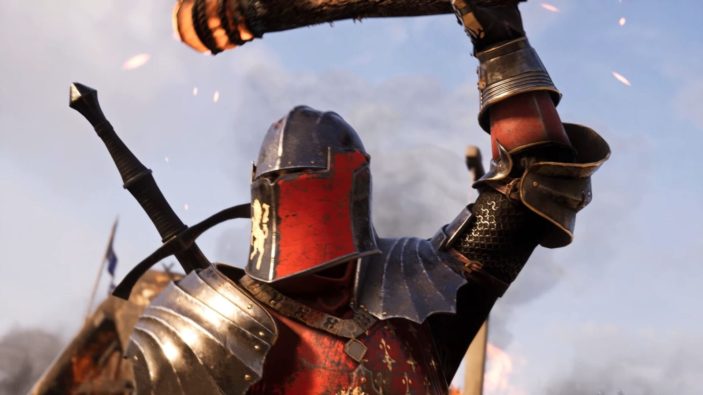 Combat is the crux of the gameplay, and it’s honestly a mixed bag. There’s so much to manage, and in that sense it’s incredibly deep. Horizontal and overhead slashes, stabs and the ability to adjust your swinging angle and turn your hips with each swing for added power. Defensively, you can dodge, block and counter with well timed responses. Chivalry 2 gives you more than enough to dominate the battlefield, but comes off as a little lopsided, and for a bunch of little reasons; you’ll die frequently. Poor ping renders you useless, and getting ganged up on is an impossible feat to overcome. The dismemberment animations are hilarious, but too often I found my efforts were thwarted by a cheeky archer or backstabbing teammate. Yes, team damage is a thing and you’ll go down to these blindsided attacks more than you’d think. When combat works, it’s incredibly satisfying. One on one duels are a true test of reflexes and skill, but given the chaos, I never get the chance to play them out in full.

Certain modes allow you to attack and defend strong holds, while other larger modes like Sieges litter smaller, segmented objectives throughout longer play sessions and larger maps. From storming the castle walls, to burning tents and buildings within, all the way to overthrowing the throne room, it’s varied enough to keep players engaged, filled with unique strategies and plans of attack. However, traditional team death match stands as my favourite. Large open fields, two teams of screaming men barrelling towards each other, it’s true Braveheart stuff; and I loved it. Many of my favourite encounters occurred during these modes and in these environments, usually allowing the combat to shine.

Chivalry 2 also gives players the opportunity to play in either first or third-person modes. While I switched between both from time to time, it comes down to choosing between the lesser of two evils. While first person combat is incredibly engaging, allowing for a greater level of accuracy, you’ll no doubt catch an arrow to the butt. Third-person combat counters this annoyance, but brings with it an experience that feels ultimately less tactile. Given the Chivalry franchise has always leaned into user-friendly combat mechanics, it’s still incredibly accessible in either perspective.  Although there aren’t many maps to choose from, I found they were complimented with multiple objectives; although some maps feel incredibly (and possibly intentionally) bottlenecked, giving the defending players a huge advantage when it comes to setting up their defences. 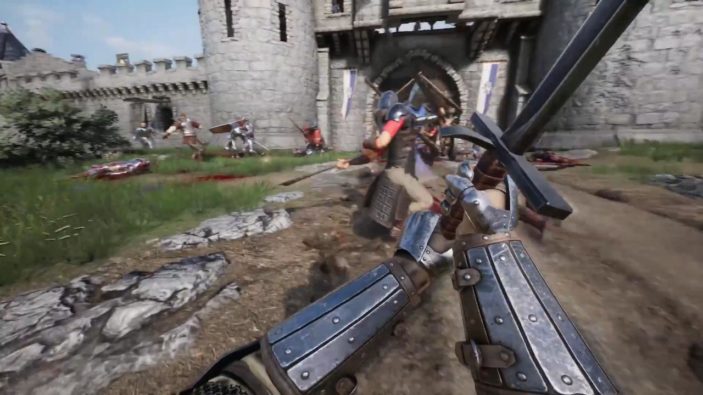 We Are The Knights Who Say, Ni!

With a wide selection of weapons and four classes to choose from, Chivalry 2 provides players with unique and intuitive ways to dominate the battlefield. The Archer, Vanguard, Footman and Knight classes available all have a role to play, with exclusive weapons to suit multiple play styles. Should you wish to infiltrate the boundaries and flank your enemies as the Archer, or storm the gate as a Knight, each map allows a certain role to shine in some way. These classes will most definitely dictate your play style, but Chivalry 2 does a great job at balancing each class with unique perks that never feel overpowered or cheap.

I spent most of my time with Chivalry 2 bouncing between all four classes, levelling up to unlock new weapon slots and contributing to the battle in unique ways. Three subclasses within each broader class can also be utilised to take advantage of certain weapons in conjunction with your favourite perks. For example, when choosing the Vanguard class, the Devastator subclass allows the player to use two of the heaviest weapons in the game without sacrificing speed and manoeuvrability, at the cost of less health. A multitude of customisation options keep things fresh, with numerous weapons to unlock. I can appreciate the variety, but after a certain point, there’s little to no reason to pursue certain weapons unless you have a personal liking for them. As none of the weapons are based on statistical advantages, there’s little reason to grind once you have found your favourites within each class. In game cash helps to unlock these items, while premium currency can fast track your success. Thankfully, as these options are purely cosmetic, gameplay is kept balanced.

Beyond customisation and gameplay, I admired Chivalry 2’s tongue in cheek approach more than I’d like to admit. From the hilarious battlecries to the sly prompts that pop up on screen, it all left me with a cheeky grin on my face. Being a huge fan of Monty Python and The Holy Grail, I couldn’t contain my laughter when I had my arm lopped off, as my HUD exclaimed, ‘It’s just a flesh wound!’. It’s great stuff. But paired with Chivalry 2’s relaxed, arcade-like approach to combat, this tone feels incredibly natural. Top it all of with some sleek animations, textures and hilarious voice acting in general, it’s hard to complain about the overall presentation. 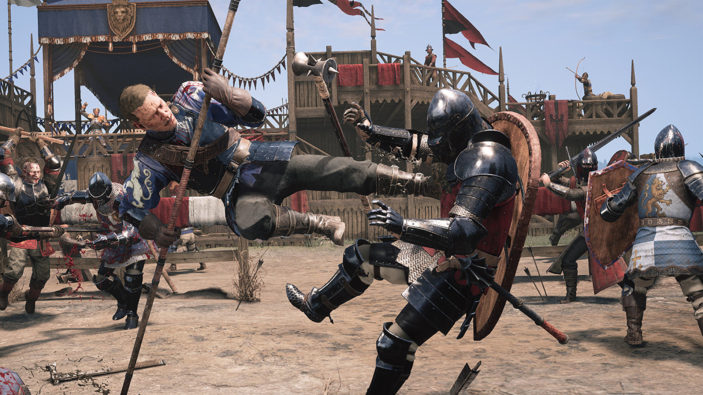 Chivalry 2 might not be for everyone, but it’s definitely trying its hardest to get you invested. From satisfying combat to a hilarious tongue in cheek approach to its overall tone, it’s easy to see why. With a multiplayer focused experience at the forefront of your time spent with it, Chivalry 2 admittedly does show its hand incredibly early. I found myself switching between classes, weapons and strategies, which made for both hilarious and tense moments, but I also found myself losing interest when it came to grinding in order to unlock a slightly darker garment than the one I was wearing underneath my armour.

While there are plenty of engaging maps and modes to experiment with, your individual ‘hero moments’ will directly influence the amount of fun you’ll have from match to match, and thankfully I had a few. It’s definitely rough around the edges, but at its heart, it’s fun, dense and engaging, which is all it really needs to be. So buckle up your armour, and hold onto your shield tight; I’ll see you out there on the battlefield.

Review conducted on Playstation 5 with a retail code provided by the publisher.