12 years after its original release, Call of Duty 4: Modern Warfare is still considered by many to be the best entry in the series. Developer Infinity Ward has grappled with its legacy ever since, trying to recapture the aspects of the game that made it a hit.

In 2019, the roundabout of Call of Duty developers has IW at-bat once again. Rather than chase the dragon any longer, IW has instead opted for a soft reboot, simply titled Modern Warfare. After a closed beta period that promised more tactical, hard-nosed gameplay, it was exciting to see the franchise getting back to those roots at last.

The question, of course, remains: Can you teach an old service dog new tricks? The answer is yes, and no. Modern Warfare is a clear return to form — without a doubt one of the better entries within the franchise, but it ultimately fails to break new ground on a consistent basis. Modern Warfare is really, really good, but it also feels a little too familiar. That said, and given that this is a reboot, perhaps this is entirely IW’s intention.

Lead characters in Call of Duty campaigns are often little more than a pair eyes through which to witness explosions and spectacle. Here, IW runs with the theory that a little depth goes a long way. They’ve created believable, intriguing characters that react very differently to the hurdles of their separate journeys.

Alex is positioned as the reckless veteran with a heart of gold, while Kyle is a dutiful, by-the-book soldier, increasingly affected by what he witnesses as the story unfolds. It’s not revolutionary writing by any means, but it does represent a step forward for the franchise. The real star, however, is Captain Price. A fan-favourite character and time-traveling mainstay of the Call of Duty series, Price (played by Barry Sloane) is given everything he needs to steal the show. Most of your time is spent at Price’s side, learning little about his past and a lot about how he handles the present.

He is a dark and brooding man, but every word is suffused with a dry humour that allows the player to connect and empathise. The 7-8 hour story sees Alex, Garrison and Price take on an international terrorist organisation determined to plunge the world into biochemical warfare. Together, they’ll aid rebels through seriously impressive action set pieces, as (fictional) Urzikstan fights for its independence against the threat of Russian-backed destruction. 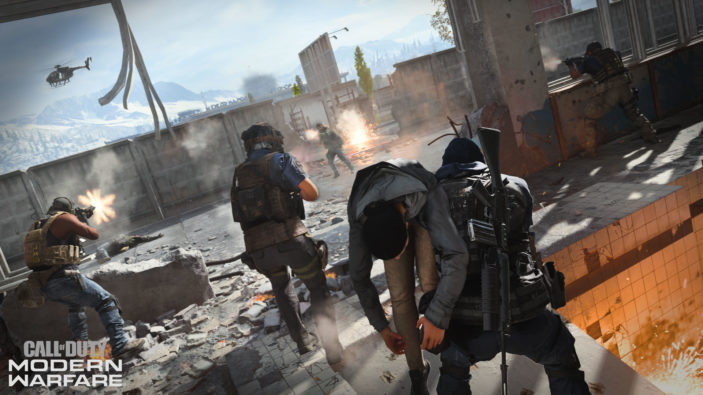 If you were hoping for the game to strike any kind of political stance, let the dream go. Modern Warfare takes the political position of 1980’s action movie — the Russians are a convenient stand-in for the root of all evil and must be stopped. Its unwillingness to commit to the few political ideas its willing to incorporate means the story lacks the harder punch it might otherwise have had.

Modern Warfare does indeed place you in situations tense and controversial, but they are surprisingly infrequent. It felt like, after throwing one or two controversial moments at the player, the writers would quickly veer away from the moment and back into traditional shootouts as if feeling guilty for confronting the player with it all. It’s not that I necessarily craved more of these moments — indeed, more sensitive players and real-world veterans struggling with PTSD may find these moments extremely confronting — but I also felt as though Modern Warfare shone brightest when it refused to shy away from unspoken and overlooked atrocities, and the cost these men must pay for their role in them.

It is worth noting that Modern Warfare’s pre-rendered cutscenes are astoundingly beautiful. We’re talking Control levels of facial detail and animation. It’s really quite remarkable how much work IW have poured into Modern Warfare‘s visuals. It really feels like they’re pushing the current generation of consoles to their limit, and it allows them to create the kind of gritty action-movie feel fans want from a CoD campaign.

Competitive multiplayer returns yet again, and it’s simply one of the best multiplayer outings the series has seen in quite a while. Call of Duty is often at its very best in multiplayer, and Modern Warfare is no exception. It feels slick, responsive and faster than ever, as Infinity Ward have successfully tweaked the experience in areas that were previously lacking — weapons no longer feel like the hyper-accurate laser pointers they once were — while maintaining the fast and frenetic core of its gameplay. On top of all the returning competitive modes, the two greatest standouts are Gunfight and Ground War.

Gunfight pits you and teammate 2v2 style in close quarters, which can make for some extremely tense moments, particularly in the later stages when things get close. Gunfight is all I used to do in the original Modern Warfare, gathered on the couch with a couple of friends to duke it out in close quarters. 2v2 is such a different flavour for CoD, one I find delicious, and I’m so happy to see it return.

Ground War presents the polar opposite experience. Two teams of 32 compete in large scale battles, replete with vehicles and multiple objectives to capture and defend. It truly is Domination on steroids, making me wonder how the Call of Duty series even went this far without a mode like this. EA’s Battlefield suddenly has serious competition in the big-team battle department. 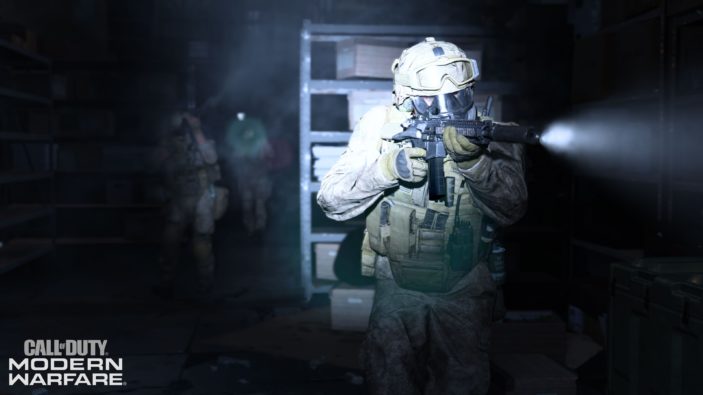 Customisation and weapon variety is as strong as it’s ever been — but that’s not to say it’s doing something new, because it’s really not. I understand a more realistic approach would hurt some of the bombastic upgrades and abilities from the Black Ops series, but there’s still plenty of weapons to toyed with and improved upon. My only true, broad gripe with multiplayer is the map selection. They’re certainly not all bad, but it did feel like they lacked any verticality. The tactical advantages of the sniper rifle have been damaged substantially (though this will surely be great news to anyone who can’t stand a camper and I understand). The newly added cover mode does allow for some tactically placed shots and positioning, and it’s quite intuitive.

Alright, let’s talk about those dreaded micro-transactions: There are none! (cheering and confetti erupt in the background – ed) At least for now (cheering and confetti continue, but more quietly – ed). Modern Warfare has opted out of loot boxes altogether, moving instead to a Fortnite style Battle Pass system set to release later in the year. Additionally, all future maps will release for free packed into various game updates.

Rounding out the package is Spec Ops, a cooperative experience intended to bridge the gap between single and multiplayer. Spec Ops is divided into various operations which play out as smaller missions with their own objectives. These range from storming a gate to eliminate a terrorist leader, all the way to sneaking far behind enemy lines. While I wish there were more operations to take part in for the sake of variety, what is here is fun, accessible and conveniently bite-sized.

Survival mode remains a PlayStation exclusive for the next year, which is great for Sony fans and a pain for everyone else. It’s a great way to experiment with new weapons, while being able to work on certain builds and classes, all without the super competitive edge. It’s nowhere near as deep or intricate as Black Ops’ Zombies modes, but it provides some good fun nevertheless. I would recommend the Spec Ops modes after completing the campaign for some added context, as each operation features a cutscene that loosely ties into the context of the campaign.

Overall, Modern Warfare is really, really good at what it does. While it doesn’t break new ground for the franchise, it should still be praised as a blisteringly fun first-person shooter, bringing the Modern Warfare series back into the limelight with incredible polish and potential. While the campaign pulls a few of its punches, it’s still a fun ride. The multiplayer modes highlight the stellar gameplay. Map variety leaves something to be desired, as we can only hope some old school maps male an appearance sooner or later.

With all of this said, if you’re a Call of Duty fan, Modern Warfare will feel like a warm welcome home.

Review conducted on PlayStation 4 with a physical retail copy provided by the publisher.