In early May, I was among the first in the world to play Borderlands 3 at the official gameplay reveal event in Los Angeles. That preview gave us access to two of the game’s four classes — the muscular Siren Amara and the cloak-and-dagger Operative Zane. We were promised then that we’d get to spend time with the two remaining characters, FL4K and Moze, before the game launched.

2K were good to their word. Quite apart from the scant few hours we got at the gameplay reveal, our second sit-down with Borderlands 3 was an all-day affair. We were given the keys to two substanial sections of gameplay. The first slice comprised the game’s opening hours and got us hands on with FL4K. The second played out on the jungle world Eden-6 and gave us our pick of the game’s four heroes.

FL4K has been the character that’s interested me most. Not only is FL4K a sentient robot, he is also a Beastmaster, a character with a deep understanding of wild animals and the natural order. His skillset revolves around his animal companion, the two of them working in concert. The animal companion is a permanent summon, capable of dealing insane damage on its own, and upgradable as part of FL4K’s skill tree.

His name, a l33t-speak bastardisation of “Flak,” and his hulking frame might suggest that he is the game’s equivalent of the Gunzerker class, damage output. In reality, he sits somewhere between Mordecai, the Hunter in the original Borderlands and Gaige, the Mechromancer DLC class added to Borderlands 2.

His companions aren’t temporary summons like Gaige’s mech, staying permanently on the field. His pet can’t be directed with the same accuracy as Mordecai’s buddy Bloodwing, but it can be used in combination with certain action skills — teleporting an angry, armoured Skag into the middle of an enemy mob really is its own reward.

The animal companion let me take a more cautious approach to combat. I could hang back and pick at enemies from a distance while my skag friend Mr. Chew got up close and personal.

And then there’s Moze, the Gunner. Unlike FL4K, Moze actually would be the closest character in proximity to the Gunzerker. Her action skill puts her in control of an oversize mech called the Iron Bear. The Bear can be customised with different weapons as you level up, each one designed to suit different attacks and weapon loudouts.

There are a few visual homages to games like Titanfall and Overwatch in the Iron Bear, and its raw damage output when you’ve got a strong loadout equipped is unmatched. With only a few skill points I was able to not only extend the life of the Bear to an insane degree, I also made it possible to jump out of the Bear and have it move around in sentry mode (kind of like a Titan). Yet another skill point added a co-pilot’s chair so a friend can jump in and ride shotgun with me in co-op.

The two worlds we got to spend time with were Pandora, ruined dustbowl and longtime home of the Borderlands series, and Eden-6, an overgrown swamp world and apparent home of the Jakobs Corporation+. Pandora we’ve seen plenty of before — it’s a world (with a surprising amount of lore behind it) left to crumble in the wake of massive corporate interference, the hunt for legendary technological caches called Vaults, and the race to mine the planet of its unique and highly sought after resource called Eridium. It’s where your adventure begins and is the launch pad for Borderlands 3‘s spacefaring story. Pair this with the futuristic metropolis of Promethea, the level we played at the LA event, notably the home of the Atlas Corporation, and perhaps some indictors as to the nature of Borderlands 3‘s plot begin to emerge. As the threat posed by the Calypso Twins grows, could the Crimson Raiders be looking for a little corporate sponsorship? 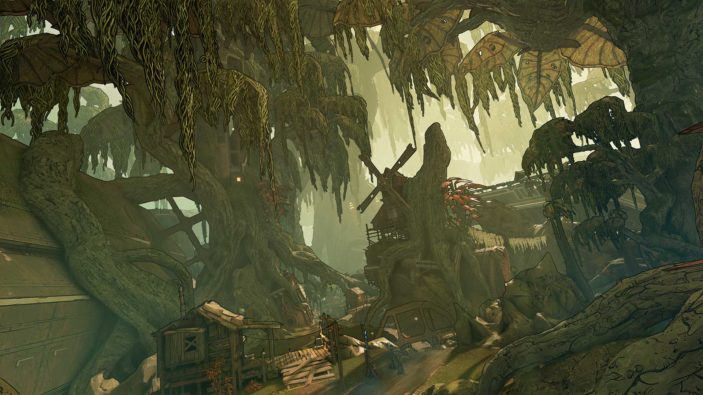 Our six hour preview only further reinforced the notion that Gearbox are not looking to reinvent the wheel here. The heart of the Borderlands experience — the builds, the stat crunch, the drops — all remain exactly as you remember them. The touches of modernity are standard quality-of-life stuff like mantling and sliding, multiple action skills and The Lost Loot Machine that helps you recover loot drops that may have been overlooked in the heat of battle. It feels like the Borderlands fans know, love and want more of. And in an era of AAA design that chases monetisation trends as often as it tells players what they want, that’s already pretty refreshing.

Borderlands isn’t for everyone. It’s screeching sense of humour is an acquired taste. It’s visual may not appeal to those used to hyper-realism in their shooters. The amount of stat crunch involved may not appeal to Destiny fans used to making that single Power Level stat go up. I can already hear the thinkpieces about how it hasn’t meaningfully progressed its design being prepped. But for the faithful, the long-time fans, the real world Children of the Vault, it sure as hell feels like the game you’ve been waiting for.

The author of this preview was flown to Sydney as a guest of 2K Australia.