Blood & Truth is the game that PlayStation VR sorely needed. For a long time, the peripheral has been seen solely as a gimmick, and been defined by self-contained ‘experiences’ rather than meaty, involving stories. You can become Batman, save a little robot army, play soccer with your head — but at the end of the day, that experience is over as quickly as it began, and you go on your merry way.

PSVR had the potential to be a home to something greater, and now, it is. Blood & Truth is spectacular. Taking the reigns of protagonist Ryan Marks, players are quickly thrust into a world of murder, mayhem and gang wars as the rollercoaster story unfolds around them.

You begin Ryan’s tale in an interrogation room where Colin Salmon’s CIA operative Carson weaves a tale of family drama, bank heists and funerals. Ryan is the sarcastic dickhead to Carson’s straight-laced cop, and their banter adds a great layer of personality and interest to the game. The dialogue and voice acting is sharp, well-written and polished, making for a constantly interesting and twist-filled story.

While the game is partially based on and inspired by the ‘London Heist’ experience found in PlayStation Worlds, it only really takes the base mechanics of the game, and spins them into something new, brilliant and exciting. 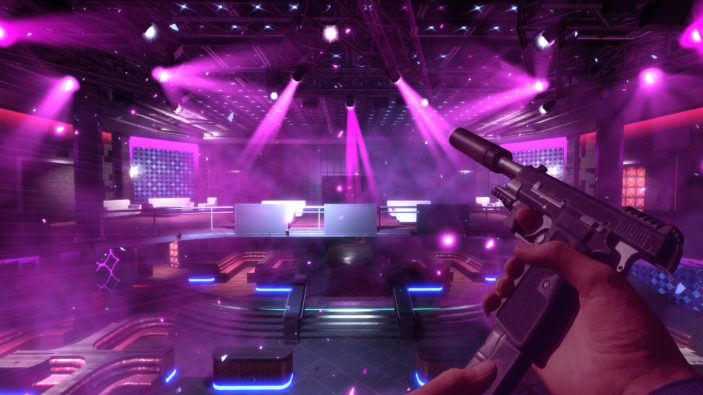 The opening chapter, for example, takes place in a desert landscape as players discover Ryan’s history with special ops — and of course, his prowess with a gun. From there, you’ll find yourself whisked away to a family gathering as you lay your father to rest. It’s not the most complex or multi-layered story but the central conceit is engaging and, like a thriller novel purchased at an airport, you won’t want to put it down.

Ryan and his family are a great bunch of characters, and their sarcastic asides and in-fighting make them feel real and oh-so-very relatable. You want to fight for them, and that drive guides you through the story.

The breakneck speed of the game rarely relents, but the tale it tells is fantastic (even if it’s not unique). By the end, you’ll feel part of Ryan’s family just as much as he is.

In any VR game, the mechanics are the most important function. After all, you become the game, and mechanics that feel wrong or unnatural are more likely to break immersion. Thankfully, everything Blood & Truth puts forward works and works pretty well, too.

The gun mechanics in the game are fairly simple. You have a holster on your back and by your side, and a chest container filled with ammo. As you run and gun, you’ll need to keep your ammo stocked by using your weird floating hands to reload on a frequent basis. 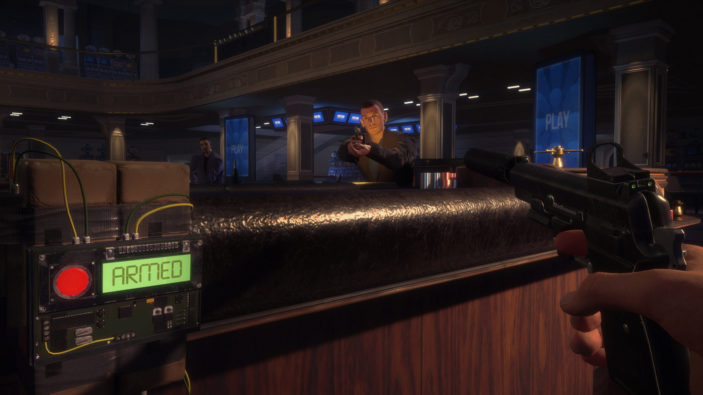 Shooting is as accurate as you’ll find in any VR title, but as always, it’s a bit finnicky when it comes to getting just the right shot. A bit of practice, and paying attention to the sights fix this problem fairly quickly, but as with any game, it takes a moment to readjust.

But it’s not all guns – and other little touches all make the world of the game seem that much more real. Even something as simple as using move controllers to physically climb a ladder or push yourself through an air vent adds to the action. 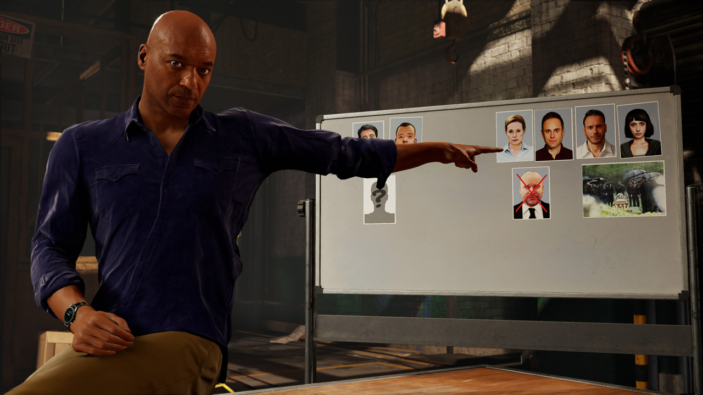 Blood & Truth goes for full-on realism with its characters and world, creating a game that occasionally slips into the uncanny valley, but always looks stylish while doing it. The details are slick and look great, from the wrinkles on our protagonist’s weird, floating hands to the neon glow of the casino setting.

Every corner has something new to look and play with, and while the action is somewhat limited by the PSVR’s resolution, the visuals build a world that’s fascinating to look at and play in.

The PSVR desperately needs more games like Blood & Truth. It’s thoughtful, well-acted, polished and fun. You get to shoot people in the nuts! What more could you want in a game? I was constantly finding new things to love about it, even when I was just tossing paper at a wall or visiting an art exhibit.

As a big budget experiment, it’s absolutely a success. It’s clear the love and passion that’s gone into this game, and it genuinely feels that it’s made a huge leap on behalf of all VR games. Anyone with a PSVR should check out this title.

FOUR AND A HALF (OUT OF FIVE STARS)

This title was reviewed on a PlayStation VR with a retail review code provided by the publisher.