As a fan of both the Rocky film series and the sport of boxing in general, I often wonder about the next definitive boxing game. Believe it or not, it’s been a decade since EA Sport’s Fight Night Champion, which I still dip back into until this very day. And then I saw it; the announcement of Big Rumble Boxing: Creed Champions. A new boxing game based on one of my favourite film series? Sign me up! After a few rounds with this arcade romp, I’m still left reeling for a new boxing saviour, even if I’ve played much, much worse. Big Rumble Boxing: Creed Champions packs in the fun visuals and fast-paced arcade gameplay that manages to amuse for a few hours, even if it lacks the depth that brings fans back time and time again.

Yo Adrian, We Did It!

Big Rumble Boxing: Creed Champions follows the stories of both Rocky Balboa and Adonis Creed, thanks to a main Arcade mode, which sees players slogging through some iconic fights that play out in hilarious clip-art fashion. While the Creed and Rocky storylines serve as the highlight for this mode, you will get the chance to choose from 10 initial fighters, ranging from featuring Rocky and Creed characters, to some newer faces featured in Survios’ previous VR boxing project, Creed: Rise to Glory. The Rocky storyline plays out as you would expect, as Rocky ponders his glory days in a conversation with Adonis Creed during a training session. As we flash back to each fight, the context is clear enough, even if the narrative in between these fights is relatively absent, lacking context for those who may have never seen the films. 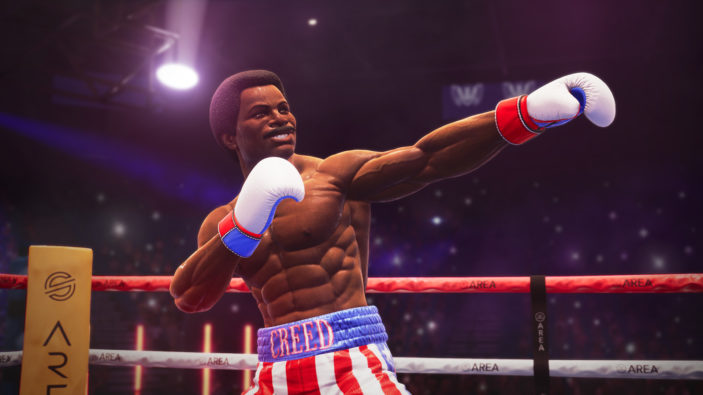 There is a certain level of charm to these fights, as caricatures of each opponent recreate some defining features with their own animated twist. However, the story takes you to some strange places. found it incredibly hilarious and somewhat charming that developer Survios chose to include some of Rocky’s run-ins as a loan shark, as he dishes out punishment in some back alleyway, still dressed in his red and white boxing shorts and gloves. I understand it’s more of an effort to recreate or include his nostalgic street gear, but it’s undeniably and hilariously awkward. Unfortunately, Rocky’s tale abruptly ends after the confrontation with Ivan Drago in Rocky 4, which is strange seeing as the Creed franchise canonically includes so much more of Rocky’s career after this point in time. It’s just strange that we can beat up some poor soul in an alleyway, but not take on Tommy Gunn in the streets of Philly? I know, I’m reaching at this point. Adonis’ story seemingly takes place after the events of Creed 2, as Adonis becomes embroiled in an international boxing tournament hosted by a dodgy promoter.  It’s admittedly bland and silly, but I can understand this approach, given Creed’s lack of any memorable opponents.

It’s the Eye of the Tiger!

In terms of gameplay, Big Rumble Boxing: Creed Champions is incredibly competent when it comes to recreating some of the arcade boxing found in past titles, like Ready 2 Rumble Boxing. It’s fast, simplistic and stylish, even it feels a little shallow after longer play sessions. Players can utilise light and heavy attacks, combined with a push of the analogue stick in different directions for hooks and uppercuts. Hilariously enough, a dedicated grapple button not only grapples, but launches a flying uppercut that seems incredibly far fetched for boxing, even by these standards. Fights are determined by knocking your opponent down, usually a total of four times for a TKO. Health bars replenish slightly after each round, but fights rarely last longer than 5 minutes. Players can also rely on the right shoulder button to block and slip opponents for counter punches, if timed right. Once a certain number of succesful punches have landed, pressing both shoulder buttons enables a super-punch which deals major damage. These small cutscenes are quite cool at first, as each character has their own special attack, but as there isn’t a variety to choose between a range of attacks, expect to see the same animation again and again, particularly if you’re planning to use a fan favourite character. 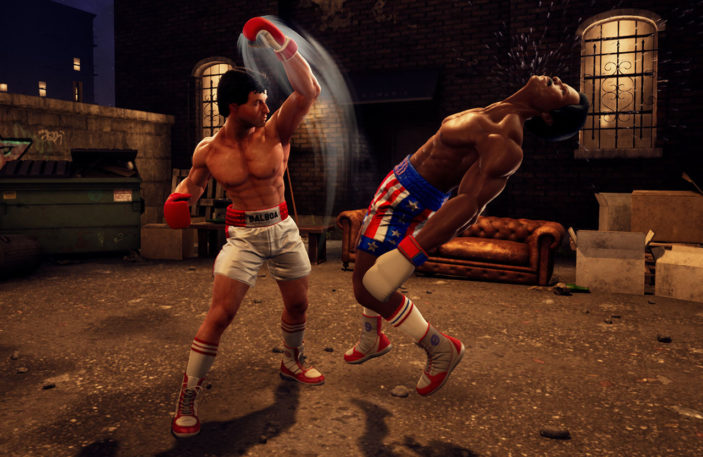 On the easiest difficulty, fights remain relatively bland, and with minimal resistance from the AI. Harder difficulties do require a combination of well timed slips and dodges, as opponents can become quite ferocious, which does encourage some semblance of a learning curve. But once you’ve mastered that, it’s hard to dig any deeper. Fighters don’t come with any predetermined statistics or noticeable differences, so each fighter ultimately feels the same, only enhanced or altered by your difficulty settings. It would have been nice to include some sense of strategy, as you bob and weave around Ivan Drago or Clubber Lang’s deadly one-hit knockouts, or move away from Apollo Creed’s flurry of jabs. But I feel as though once again, I’m slightly reaching here.

Aside from boxing, you’ll find yourself intermittently partaking in small training sessions between fights. These play out like small 80’s montages that switch between mini-game exercises, as you rapidly tap the shoulder buttons running on the treadmill, hit specific button combinations on the heavy bag, and punch and dodge the mitts with well timed button presses. The fact that these training exercises alternate so quickly keeps the pace running at a clip, but unfortunately falls to the same amount of repetition, given they are dished out to all fighters equally, and have no real effect on overall gameplay.

It Ain’t About Hard Hard You Hit…

Big Rumble Boxing: Creed Champions plays well enough, but is unfortunately let down by its lack of modes. Besides the main Arcade mode, Verses mode allows single fights between two fighters, which allows for local multiplayer. Finally, the Training mode allows players to stretch their legs and practice their skills against dummy AI. And that’s it. With no online multiplayer in sight, the shallow nature of Big Rumble Boxing: Creed Champions sets in a little sooner than a would have liked. The in-game music rarely helps, as it’s usually repetitive and bland elevator music. 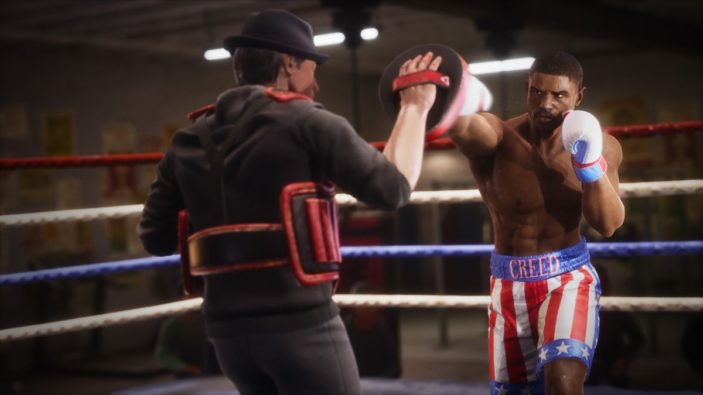 However, the licensed soundtrack is straight fire. I really mean it, this mix of music used in the films, from the iconic Rocky theme, to some of Creed’s more modern hip-hop tracks, like The Fire by The Roots. The first song that played for me when the menu opened was that sweet, sweet Rocky theme, and I may or may not have stood up out of my seat. Unfortunately, I couldn’t find a way to browse and explore the soundtrack which hurt, but I’ll take this soundtrack on the car ride to work any day. Unlike the soundtrack, voice acting seems completely unnecessary here. While the game lacks any real dialogue, characters shrug, sigh, laugh and grunt over the text, which I believe is way funnier than it was intended to be.

It’s hard for me to pick apart Big Rumble Boxing: Creed Legends as it’s not necessarily bad in any respect. While it lacks the depth and longevity of a more realistic boxing experience, it does serve the Rocky and Creed franchises in a respectful manner. There’s fun to be had here, thanks to some easy to pick up gameplay, and a selection of all your favourite Rocky heroes and villains.

But given the slim offerings in terms of game modes and overall depth, it’s not something you’ll find yourself returning to after a couple of weeks. Hold out boxing fans, the next big boxing game is on the way. Just consider Big Rumble Boxing: Creed Champions a charming pit stop.

Review conducted on PlayStation 4 with a pre-release retail code provided by the publisher.