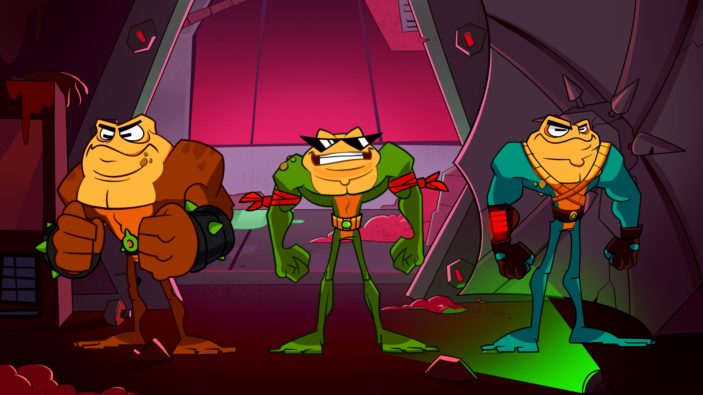 There’s a lot I like about Dlala Games’ take on Battletoads, but there’s just as much that I don’t.

The latest Battletoads arrives almost 20 years after the NES original. It’s a side-scrolling beat-em-up in the same vein as the original, but it makes several changes to the series’ formula that may not sit well with fans.

Nostalgia for fun and profit

First, it introduces a storyline complete with fully voiced dialogue and truly obnoxious “jokes” designed to please … I’m honestly not sure who these things are supposed to please. The toads have been trapped in some kind of simulation (it’s never clearly explained) for around 26 years. Now freed, the toads find that any celebrity they might have had dried up long ago. They’ve had to get day jobs to get by, jobs they promptly quit when they decide to simply go back to their old ways.

When the rebooted Battletoads loads up for the first time, it hits players with a screen they may have dreaded: a difficulty select. For older fans, the enduring appeal of Battletoads was always its bone-crushing difficulty. It was created, in part, to be a kind of antidote to the glut of games in the 8-bit and 16-bit eras that were being produced for the video store rental market. The equation was simple: games that could be completed in a weekend didn’t sell well, and games that took longer to finish often sold better.

Additionally, Rare programmer Mark Betteridge was a skilled player in his own right. Mistakenly thinking his own rather high-level skillset was on a par with a fairly normal player, he built much of the game around what he could complete. This resulted in a game that wasn’t merely difficult for the average punter, it felt mean. It was blindingly fast, wildly unbalanced, and often downright unfair. There was no difficulty selection in Battletoads. It was what it was, and you either rose to the challenge or you washed out.

There was a great interview piece from the Rare Replay Collection in 2016 that went into detail on this. Check that out below.

So, yeah. Having a difficulty selection may dent the enthusiasm of long-time fans. I understand that. There’s a certain beauty in having the game be inflexible that way. But we live in a different time than the one in which the original Battletoads was produced. We now live in an era where gaming truly is for everyone, and accessibility is of paramount importance. I’m glad you can pick the difficulty so that anyone can play. You, the player, can always ratchet the difficulty up if you wish, but I daresay there’ll be a few for whom that just isn’t enough.

If this new version of Battletoads takes its inspiration from anywhere, it’s Battletoads Arcade. More of a traditional beat-em-up than the Teenage Mutant Ninja Turtles-inspired original, the new Battletoads builds on strong fundamentals. You move from one side of a 2.5 level to the other from left to right, beating the hell out of baddies as you go. Where the original only really had three inputs — jump, punch, and move — the new version upgrades combat with combos, new moves, and Toad Abilities. They all feel quite good when you’re in the fray and kicking arse. Enemies have little exclamation points appear above their heads when they’re about to land a heavy blow, giving you time to dodge out of the way.

Each toad has its own unique play. Pimple is big, slow, and heavy. Zitz is fast and agile. Rash sits somewhere in between. Though their movesets are the same, it’s their timings that must be mastered.

It’s solid work. This kind of combat was so often weekend rental fodder — it wasn’t too deep, which kept it fun for a day or two. There’s a similar sense at play here. If the combat grabs you, it’ll likely be enough to pull you through.

Where I think Battletoads excels is in its art design. Its beautiful hand-drawn sprites and animations against detailed, painterly 2.5D backgrounds give the whole game such a striking, cohesive look and feel. There’s character pouring out of every frame, which extends the game’s welcome far beyond what it might have been without it.

The visuals help give the game’s puerile humour some much-needed context too. The look and energy of a Saturday morning cartoon give the crass, largely unfunny jokes some leeway.

Battletoads isn’t the homecoming for the series fans may have hoped for. That’s a shame, especially when it’s clear how much effort has gone into its production. For fans of the series, it will be a fun distraction — a few hours of nostalgic pleasure quickly forgotten. For everyone else, it will be a fine, if unremarkable, beat-em-up.

Back in the hole, toads. Until we meet again.