A Plague Tale: Innocence is an emotional journey in the heart of the swarm

You don’t see video games based on the infamous Black Plague hitting store shelves every day. While it suffers from a few technical hiccups and some repetitive gameplay elements, A Plague Tale: Innocence is an example onfhow to games can approach grim historical periods in emotionally resonant ways. It casts the plague itself as backdrop while creating a realistic relationship between siblings that endures until the final credits have rolled.

A Plague Tale: Innocence is set in 14th Century France, a period when the Black Plague was rife throughout Europe. Players assume the role of Amicia, a young girl with dreams becoming a knight. Amicia is soon forced to put her ambitions on hold, thrust into the role of caregiver, guiding her young brother Hugo on a cross-country journey to cure his mysterious illness. With plague fears at an all-time high, its up to Amicia to protect him from those who would see him dead to safeguard the healthy. The story focuses the majority of its time on this relationship, which grows into a believable partnership complete with impressive voice performances. The strong-willed determination of Amicia and the charming innocence of Hugo make for a fantastic combination, as one that lets the player recognise the same emotions and shorthand we have with our own family. 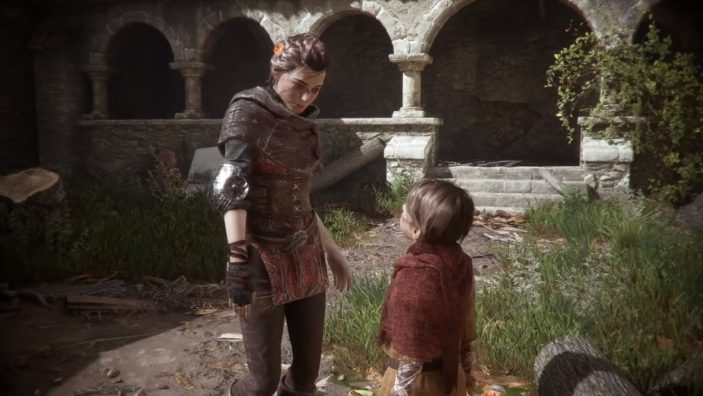 As Amicia and Hugo set out on their journey, players will explore environments ranging from the dingy city streets of Paris, to vast green open fields between towns. The game’s impressive colour palette and impressive visuals belie its dour subject matter, an impressive reminder of not only the grim world they inhabit, but the fact that a brighter world is never far away. Unfortunately, many of the character models don’t really follow suit. Both Amicia and Hugo’s character models look pretty average at best, due largely to bland costume design and faces that fail to convey the strong emotions the characters are feeling. The excellent voice acting only draws more attention to the stony facial animations. A Plague Tale: Innocence is also quite good at fooling players into thinking they are inhabiting an open world when the game is actually surprisingly linear. Attention-to-detail only gets you so far, and when the game feels like it’s gently nudging you towards your next objective, which is never far way, you start noticing the strings and staging. While exploration is broadly encouraged, not choosing the road less travelled is fine becuase it doesn’t actually lead anywhere.

From a gameplay perspective, A Plague Tale: Innocence is functional, but largely repetitive. Players will be doing one of three things at almost any given time: sneaking, running or fighting. Sneaking means hiding behind objects while distracting nearby enemies in order to slip past them. Running throws players into scripted chase sequences. These are some of the game’s strongest moments of shiver-up-your-spine drama, Amicia’s pleas to Hugo not look back intentionally convince you that your enemies are upon you. Finally, combat consists of similarly scripted sequences where Amicia must use her skills with a sling to hurl rocks at oncoming enemies. While enemies being able to kill you in a single hit is initially challenging, I found myself getting too comfortable with the controls rather quickly, draining each sequence of any real challenge. Each of these mechanics is fairly simplistic, but doesn’t necessarily linger long enough for the player to get sick of it. That said, while the game tries to break these sequences up with bookend exploratory sequences, the regularity with which they appear quickly threatens to devolve into boredom. Players are given information on each situation but the gameplay mechanics rarely intertwine with them, leaving the player feeling forced into certain choices that compound the sense of linearity. Further, there are mechanics that bounce off each other in ways that don’t feel like they make sense — sneaking sections don’t really evolve into combat, while combat sections usually close the player off in smaller locations to keep things tense. 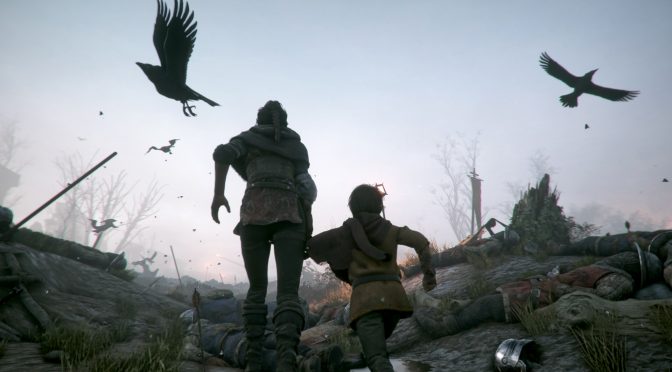 It’s not all bad however, as exploratory sequences throw in the occasional puzzle, utilising Hugo as a tool to open doors, pull levers and crawl through cracks in the wall. Holding Hugo’s hand is also important in most sections, particularly stealth, as too much time away from him could cause him to panic and alert danger to your presence. This provides one of the more engaging mechanics, as the need to keep Hugo close combined with the overall interactions between the characters strengthened my emotional link with Hugo and the need to keep him safe. Along the way, both Amicia and Hugo interact with companions that assist in various ways. The highlight of A Plague Tale: Innocence comes in the form of rats. Many, many rats. Encounters with swarms of rats verged on pure horror, as players remained safe only when in the light. While the swarms of rats are one of the most visually interesting sections of the game, puzzles involving said swarms stand out as on one of the most original sections of the experience.

Lastly, A Plague Tale: Innocence tries its best to provide pockets of variety in between, as Amicia must find materials throughout the world, which can be used at various crafting stations in order to upgrade her sling and create torches to fend off the overwhelming swarms of rats. While materials are found with little to no exploration, crafting rarely evolves past finding enough materials to create a torch, or improve the all-around abilities of your sling including speed, distance, power and ammo capacity. However, I was thankful for the plentiful amounts of sulphur needed to create torches when dealing with rat swarms, as I found it eased the tension when dealing with puzzle solving elements that took time, and were not hindered by the pressure of keeping the torch alive while attempting to proceed. 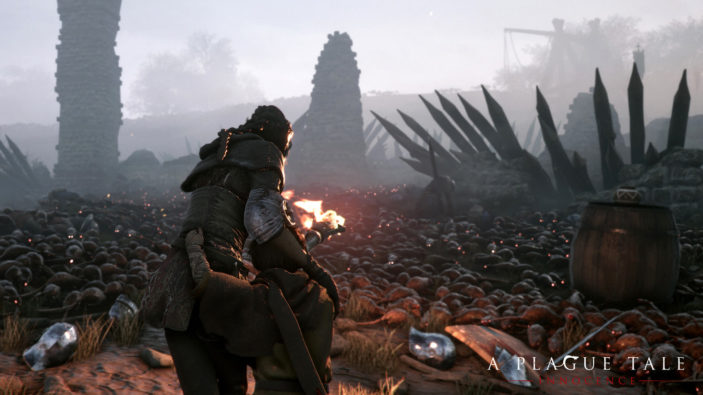 Overall, A Plague Tale: Innocence is an emotional tale of love and sacrifice, set to the engrossing backdrop of one of the deadliest diseases in history. A gorgeous world and impressive chemistry between the two protagonists kept me engaged until the very end, even through the repetitive gameplay. While the mechanics themselves are functional, the fact that players are wedged into distinct situations with little wiggle room or freedom to change their approach on the fly left me feeling trapped in a world that seemed much bigger than it actually let on. While the game lacks a certain polish, it’s far from a bad looking game, providing some memorable environments throughout. A Plague Tale: Innocence might not play like a dream, but should most definitely be appreciated as an emotional tale of surprising originality.