2006’s DS classic Clubhouse Games was a huge hit, to absolutely no one’s surprise. The perfect marriage for handheld gaming, it stylishly bought together a comprehensive index of 42 classic card and board games which have been etched into history for a good reason. Everything from Chess and Blackjack to Ludo and Solitaire was included, rounding up moreish games, many of which predate any video console and have proven to be timeless, addictive and perfect time-killers. It warranted a follow up, and now we have one.

NDcube, who are responsible for the more recent Mario Party titles, have now pulled together 51 Worldwide Classics, gifting us even more games, polished and updated so they at least feel somewhat fresh and impeccably presented. Much like its predecessor, it’s now an essential for the casual gamer and a perfect reminder of how distinctive the Switch is from the Xbox One and PS4. 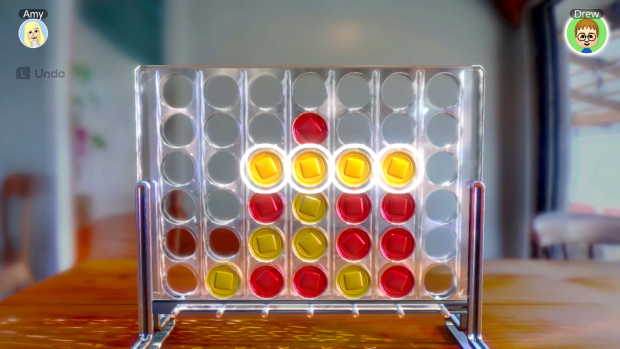 This compilation has, you guessed it, 51 games. And all the one’s you’d expect are here. Seminal strategy games like Chess and Backgammon, tense thrill-seekers like Texas Hold ‘Em Poker and Blackjack, fun multiplayers like Uno, Hex and Four-in-a-row (Connect Four), and solo hits like three kinds of Solitaire. As long as you aren’t writing them off as “boomer games” simply because they’re old (understandable if you’re a cool AF dope-lit tea-spilling, AAVE-cribbing tiktok’er), you’ll know each and every game here. And if you don’t, they might be the flagships of non-Western countries like India’s Carrom, and China’s Mahjong. Japan’s Hanafuda is even here, nodding to the very origins of Nintendo, given the historic card game is what the company traded in when it first began in 1889.

Mini games like tank combat and shooting gallery are here, but they are in their most simplistic and rawest form. The issue with this compilation is that because there are so many games, almost none of them would receive the same nuance and in-game variety compared to if they were the respective focus of an individual game.

Still, NDcube have struck an exceptional balance when it comes to presenting these tried-and-true games so any ‘dated’ criticism immediately fall by the wayside. Just try and resist the overly simplistic versions of generic sport mini-games like soccer and baseball when they are so beautifully produced, built with plastic-looking figurines, stunning realistic visuals, and outstanding pops of colour. Design throughout all 51 games is consistently excellent, whether docked or handheld.

Plenty of thought has gone into the user experience between games as well. Soundtracks are perky and bursting with trendy lo-fi beats. All games are accompanied by engaging tutorials with the opportunity to bring up facts about each one, going beyond the game to explore its place in culture and why it has persisted throughout time. I would have liked to see more of a focus on this digital museum aspect of the game, but its simple inclusion is good enough.

What would these games be if you couldn’t play them with someone else. You can either play an AI opponent, which is surprisingly difficult at times, but also online or local multiplayer. A lot of the dynamics and tactile enjoyment of card games like Texas Hold ‘Em don’t translate as well when you are playing local multiplayer, given you’re on the same screen and can’t really hide your cards. The very function of some of these games render them useless if you’re trying to do that, which is why the title doesn’t give you the option to play them at all if you’re going to local multiplayer route.

There are other games where players are just taking turns on one device, and some where you can use multiple Nintendo Switch’s in chorus (the other players just need to download a free guest pass, they don’t need to own the game as well). NDcube have thought of creative ways to use these games to highlight – or refocus – on different ways to use the Nintendo Switch, which is important seeing as there really aren’t many titles this deep into the hybrid console’s lifespan that are designed to remind us of how flexible the hardware is.

Getting back to the very early days of the Switch, 51 Worldwide Classics is a perfectly acceptable reason to rock up to a social event with your Nintendo and keep it handy should anyone want to break out into a game of Uno or try their hand at a shooting gallery. These are timeless games for a reason, and opening the Switch back up to a wider variety of players, both young and old, makes this one of the smartest releases of the year.

Save for the limitations of some of these games, the hardware, and its use in multiplayer situations (eg, Texas Hold ‘Em), at $A55 there’s no reason not to have this loaded up and ready for old fashioned action.

Although there is quite a bit of wasted potential that I’d love to see in a future version of this game. The museum aspect is really interesting and should be explored more, and in the spirit of globalisation and education, it’d be nice to have this as a way to introduce players to timeless games from all over the world. How cool would it be if more cultures were represented so we could learn what games are deeply tied to their respective gaming histories?

Highlights: Comprehensive collection and thoughtful features; beautiful design and presentation; creative ways to use the hardware in multiplayer situations; games are still as addictive as ever and a perfect way to kill time (I see this being valuable on long-haul flights, whenever they start back up).
Lowlights: History and culture ideas could have been expanded upon; some multiplayer limitations.
Developer: NDCube
Publisher: Nintendo
Platforms: Nintendo Switch
Available: Now